The buy for the two-week period, which cost $42,500, was paid for using a check in that amount dated March 31 and sent from The Campaign Group, a Philadelphia-based Democratic political media and consulting group, according to the files provided to PolitickerNJ.com from the Newark First account by Cablevision. The check was received and cashed by National Cable Communications (NCC), an affiliate of Cablevision.

The Campaign Group has many clients nationwide, and on its website shows a 14-1 winning margin for its clients in the 2013 general election cycle. Included among these clients is Atlanta Mayor Kasim Reed, who spoke at a Baraka fundraiser last month.

But the 2013 winners’ list is also heavy with South Jersey Democratic allies of Norcross. These allies include State Senate President Steve Sweeney (D-3) and state Senator Donald Norcross (D-5). The South Jersey state senator is the brother of George Norcross III, and he is currently running for Congress in New Jersey’s First Congressional District.

PolitickerNJ.com previously reported that several Democratic sources indicated that Jeffries conversed with Essex County Executive Joe DiVincenzo and with allies of George Norcross III regarding his political future. These sit-downs suggest an alliance between North and South Jersey to ensure Jeffries’ victory in the May Newark mayoral election, just 33 days away.

“Newark First is proud to partner with The Campaign Group, a nationally-recognized and award-winning media firm that has done extensive work in New Jersey and across the country for over two decades,” said Newark First spokesman James Freedland. “Their ads effectively demonstrate why Newark cannot afford to turn back the clock and go back to the clubhouse days of cronyism and corruption with Ras Baraka. The firm will continue to work with Newark First to aggressively show the people of this city that Shavar Jeffries is the clear choice to be Newark’s next mayor.”

“We have nothing to do with that independent expenditure committee, except that we agree with Congressman Payne’s message that Shavar Jeffries is the best candidate to take Newark in a new direction,” said Jeffries campaign spokeswoman Lupe Todd, referring to Newark First’s first television ad, which hit the airwaves earlier this month. 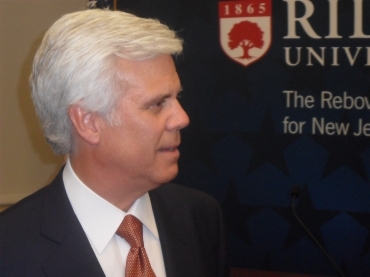