NEWARK – Newark First, the independent expenditure group that supports Newark mayoral candidate Shavar Jeffries in the run-up to the May 13 municipal election, has been on the attack lately against Jeffries’ rival in the mayoral race, Ras Baraka. These attacks have centered on a critical aspect of political life: money.

On April 18, Newark First asked Jersey City Mayor Steve Fulop, who endorsed Baraka in February, to denounce his political ally for accepting salary increases as Newark’s South Ward councilman while at the same time the City of Newark laid off workers.

Earlier in the week, Fulop had told the press that a proposed plan to double the salaries of Jersey City council members and their aides is “shameful.”

“If Mayor Fulop truly believes that city council members accepting a salary hike is ‘shameful’ in Jersey City, he ought to denounce Ras Baraka for lining his own pockets while Newark is struggling,” said Newark First spokesman James Freedland.

When asked by PolitickerNJ.com for comment about Newark First’s assertions, Fulop declined.

“While Newark laid off more than 1,000 workers, Baraka took a salary increase, put his brother on his office’s payroll and charged the people of the city for pricey out-of-state trips. Yet the public has not seen the full line-by-line spending records from his office. It’s time for Councilman Baraka to come clean and give a full accounting of how our money was spent,” said Dr. Chris T. Pernell, president of Newark First, in a written statement.

However, Newark First’s latest claims against Baraka came out on the same day when the most recent 29-day re-election campaign fund reports were released by the New Jersey Election Law Enforcement Commission (ELEC) for the period ending on April 11. These reports include independent expenditure funds.

Two high-number contributors make up the vast majority of the donations.

The second-largest contribution made to Newark First came from Carpenters for Growth and Progress, the fundraising arm of the powerful Northeast Regional Council of Carpenters (NRCC) union. The Carpenters group donated $250,000.

But the largest contribution to the pro-Jeffries Newark First group came from another group, Education Reform Now, who donated $850,000.

On the group’s website, Education Reform Now defines itself as an organization in which “policy objectives are built around strengthening innovation, public charter laws, accountability, high-quality new school development, transparency on finance and student results, and best practices for turning around low-performing schools.” Members of the group, including board members who have experience working at high-powered Wall Street hedge funds, are active in the Success Academies network of charter schools.

The question of the role of charter schools has become a critical part of the debate regarding the future of Newark’s schools.

The One Newark school reorganization plan, announced by Newark School Superintendent Cami Anderson in December, includes the expansion of charter schools, which already serve approximately 20 percent of the city’s students, as well as the closure or consolidation of certain public schools.

Anderson has become the central polarizing figure in the debate over the future of Newark’s schools. She was appointed to head the state-run Newark school district, New Jersey’s largest, by Gov. Chris Christie in 2011. The governor publicly stated in September 2013 that he plans to reappoint her, and that he did not care about community criticism.

The timing of the introduction of the One Newark plan, which came just at the start of the 2014 Newark mayoral campaign season, has set Newark’s already inflammable politics ablaze.

On April 18, 77 Newark clergy members called for a moratorium on the One Newark plan, telling Christie and state education authorities in an open letter that they are “concerned about the level of public anger we see growing in the community” over the issue, as well as a sense of “unnecessary instability.”

Part of the sense of civic instability in Newark’s politics stems from a February attempt to torch Baraka’s campaign bus. Two men tied to the Jeffries campaign were arrested and charged earlier this month in connection with the incident.

Baraka campaign communications director Frank Baraff responded on Monday to the allegations made against his candidate by members of the Newark First group since last week. Baraff’s apparent request: show me the money.

“The Baraka campaign will continue to ignore the totally fallacious press releases of Newark First until Shavar Jeffries discloses all of his secret donors and the amounts they are donating to him through Newark First,” Baraff said in a written statement. “Jeffries’ Newark First committee has already spent an astounding one million dollars without revealing where the money is coming from. From bombing buses – to secret Political Action Committees – to desperate attacks, Shavar has run one of the dirtiest and desperate campaigns in Newark history.” 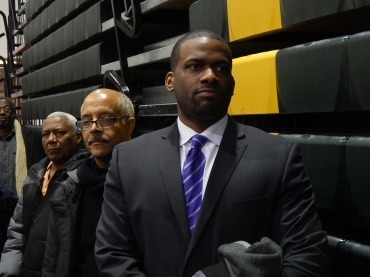