NEWARK – The Forest Hill section of Newark’s North Ward is in the city, but somehow not of it in the minds of many.

Long porches, blooming cherry blossom trees and broad lawns clash with the vision that many New Jersey residents have of Newark as a barren urban wasteland. But make no mistake: in this year’s mayoral campaign, just more than two weeks before the May 13 decision day, the front lines between this year’s rivals – South Ward Councilman Ras Baraka and former state Assistant Attorney General Shavar Jeffries – are not fixed, but fluid and fluctuating.

The tone for the beginning of the Newark mayoral race’s end game could be seen at a candidate’s debate on Friday night sponsored by the Forest Hill Community Association at the Third Presbyterian Church, located at the corner of Ridge Street and Abington Avenue in Newark.

Baraka and Jeffries, inches apart, gave no quarter. They exchanged policy soliloquies that contravened each other, but exchanged not a single glance.

While key issues such as the future of Newark’s schools and crime were discussed before an overflow crowd of 400 neighborhood residents, one flashpoint flickered over concerns that will haunt whoever becomes mayor of the state’s largest city on July 1 – the estimated $30 million municipal budget deficit and the potential state takeover of the city’s finances.

“Newark has cut itself down to the bone,” Baraka said, who has served on the council since 2010. “The council’s budget is about $4 million, which is almost less than one percent of the city’s budget. What we really need to do is to grow the revenue in the city.”

The differences between Baraka and Jeffries extend even to their choice of which North Ward hot dog truck – one of Newark’s culinary classics – they favor.

Despite such fiery exchanges, a drive down North Ward streets such as Summer Avenue and Mount Prospect Avenue on Saturday showed that perhaps the voters’ focus is not on the mayoral race, but on the city council races.

​Signs for North Ward Councilman Anibal Ramos, Jr., who is on Jeffries’ ticket, outnumbered his rival, Baraka slate member Luis Lopez. Both candidates’ signs dwarfed those of Jeffries and Baraka.

Signs for Luis Quintana, Newark’s current mayor who is running independently for re-election to his council-at-large seat, also dotted the North Ward’s landscape.

Quintana was expected to be in full effect at his annual campaign breakfast on Sunday. He was also expected by many to endorse Baraka, with whose campaign he has danced a sporadic tango since the start of the 2014 Newark mayoral campaign.

Yet several sources told PolitickerNJ.com that Quintana thanked Baraka for his presence, but did not endorse him, irking the candidate and his brother, Amiri “Middy” Baraka, who serves as campaign manager.

“He is busy dealing with being the current mayor and running for re-election,” said Quintana spokeswoman Esmeralda Diaz Cameron on Monday, who confirmed that Quintana still has not endorsed any mayoral candidate. “He’s too busy dealing with the day-to-day operations of being a hands-on mayor.”

“I didn’t know what he was going to do. It would’ve been good, but I didn’t think he was going to endorse there,” Baraka told PolitickerNJ.com on Monday night at a fundraising event sponsored by LatinoPAC in the East Ward. “With his endorsement or not, I spent the last ten days in the North Ward. We’re not giving any vote away. I’m not waiting for somebody to introduce me to the Latino community. I’m introducing myself.”

State Senator Ray Lesniak (D-20) needs little introduction to New Jersey’s political players. Lesniak was at the Latino PAC event and sources have told PolitickerNJ.com that the senator’s PAC is “involved” in the Newark mayoral race on behalf of Baraka.

Many political observers view the Newark mayoral race as a proxy gubernatorial contest. PolitickerNJ.com previously reported that several Democratic sources indicated that Jeffries conversed with Essex County Executive Joe DiVincenzo and with allies of George Norcross III regarding his political future. These sit-downs suggest an alliance between North and South Jersey to ensure Jeffries’ victory in the May Newark mayoral election, just 15 days away.

“First of all, I think Ras Baraka is going to win,” Lesniak told PolitickerNJ.com. “But whoever wins, he’s going to need the full cooperation of everyone in Trenton to help make the city work. That’s the key going forward, not who benefits from this in terms of a gubernatorial election, which is three years down the road.”

When Baraka was presented with an award by LatinoPAC, he pointed out that the award looked similar to the crystal shards seen the 1978 superhero film Superman.

When it comes down to who Newarkers ultimately elect as mayor on May 13, maybe it was the anonymous man behind the counter at Caffe Intermezzo, a classic North Ward Italian cafe on Bloomfield Avenue, who said it best about political life in the state’s largest city. 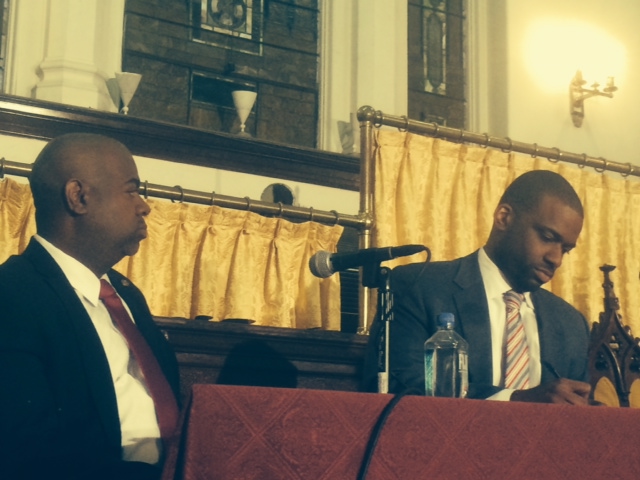