You might think that as grown-ups who are getting paid to haul tons of cargo around the country, truckers would know not to text and drive. But apparently, they’re just as bad as the rest of us.

Even though they control some of the heaviest land vehicles in existence, truck drivers are often caught on video texting and driving, as a video from WABC shows. One camera observed a truck driver carrying on “two conversations on two separate phones.”

The consequences for texting and driving while operating a truck are basically a slap on the wrist when you think about how dangerous the practice really is. From ABC News:

“A truck driver stopped by police for talking on a cell phone in New York would receive a $150 fine and five points on a driver’s license. Accumulating 11 points over an 18-month period may result in a suspended license in New York, according to the state Department of Motor Vehicles.

“According to the Department of Transportation, nearly 16,000 truckers were ticketed for using their cell phones last year, but only four of those were suspended and taken out of service…”

We don’t know about you, but this is enough to scare us off of the Brooklyn-Queens Expressway for at least a few days. 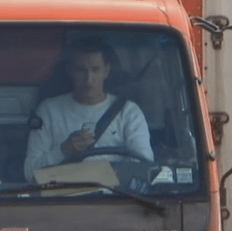