PATERSON – The presence in the Paterson mayor’s race of two Dominican mayoral candidates and two strongly vying at-large council candidates – all four drawing from different and at times overlapping pockets of support in the community – creates an unavoidable impact point in the May 13th election.

If insiders agree that a public soured on politics will contribute to a low voter turnout election next month, they simultaneously see the potential for a vote spike among Dominican Americans, which could swing the outcome.

“The Dominican piece is a very important piece for me,” says School Board Commissioner Alex Mendez, a candidate for one of three at-large city council seats, who also voices his commitment to every community in Paterson in his quest to represent the whole city.

Mendez has built a substantial political operation in Paterson and has an accelerated campaign style reminiscent of Council President Andre Sayegh, a mayoral candidate.

One of his Hispanic opponents, Passaic County Community College assistant director of admissions Maritza Davila, has close ties to the Democratic Party and strong alliances, which insiders say contribute to her strong standing as a candidate.

She’s also the only woman in the at-large council contest.

The forces of former Mayor Jose “Joey” Torres, a Puerto Rican mayoral candidate, do their best to spin the Dominican factor in their favor, arguing that a preponderance of Latino voters – including those who back the unaffiliated Mendez – is sufficiently sophisticated to know that incumbent Mayor Jeff Jones and Sayegh must be stopped and therefore will finally line up behind the strongest Latino in the contest.

But others see two competing Dominicans in the race undercutting the former mayor and weakening his ability to consolidate the city’s Hispanic vote. His past victories and that 2010 near-victory – hinged on maintaining an Hispanic front.

“That’s why Joey went after Rigo,” a source told PolitickerNJ. “He knows that Rigo is gaining.” The reference was to Torres’ decision at a debate forum on Tuesday to strike Rodriguez with a very pointed jab at the councilman’s voter fraud case.

For his part, as he stays focused on drilling up his own vote totals, Mendez stays away from commenting on the case.

“I don’t have too much information,” says the council candidate. “That is an ongoing investigation and I don’t care to comment.”

But the spat between Rodriguez and Torres and the former mayor’s public willingness to gnaw at his rival’s Achilles heel, elucidates the very real challenge Torres has to convince all Latinos to stand with him.

“This is strong support that Joey has had in the past in the Latino community, and now there are two Dominican council candidates running and providing a potential surge of community support under the two mayoral candidates and Joey knows they can be strong if they unite,” a source said.

“In this case, they’re divided against him because of Rigo,” the source added.

“Rigo is a proven 4,500 to 5,000 vote-getter,” the source said. “He’s a sleep factor. The indictment doesn’t matter. His supporters aren’t looking at that. He’s a very popular person, who consistently gets those vote totals. He will have an impact on this election with a strong showing by Dominican voters.”

PolitickerNJ over the weekend observed less than enthusiastic visual support in the 4th Ward for incumbent Mayor Jeff Jones, whose status is impaired by the presence in the contest of his disillusioned Health and Human Services Director, Donna Nelson-Ivy.

Operating a campaign with the political intelligence of those who helped re-elect U.S. Rep. Bill Pascrell (D-9) in 2012, Sayegh’s allies see a path to victory in low African American turnout coupled with a split Latino vote and operational discipline.

Torres this past Saturday played merengue more than salsa at his campaign party at Makao, showing a three-pronged battle approach when taken into account with his own debate performance and council meeting appearance last night by his ally Lydia Robles: project love to the entire Latino community, slice up Rodriguez by pointing out his deficiencies, and have surrogates attack Sayegh.

Up against the raw numbers, Team Sayegh seeks a substantial toehold in wards 2 (with the empowered Bengali community), 6 (Sayegh’s home ward) and 3 (the home ward of Pascrell) in addition to sniping pockets of support elsewhere, including Dominican votes, through the support of Ward 5 Councilman Julio Tavarez, residuals from Davila and party machine targets. 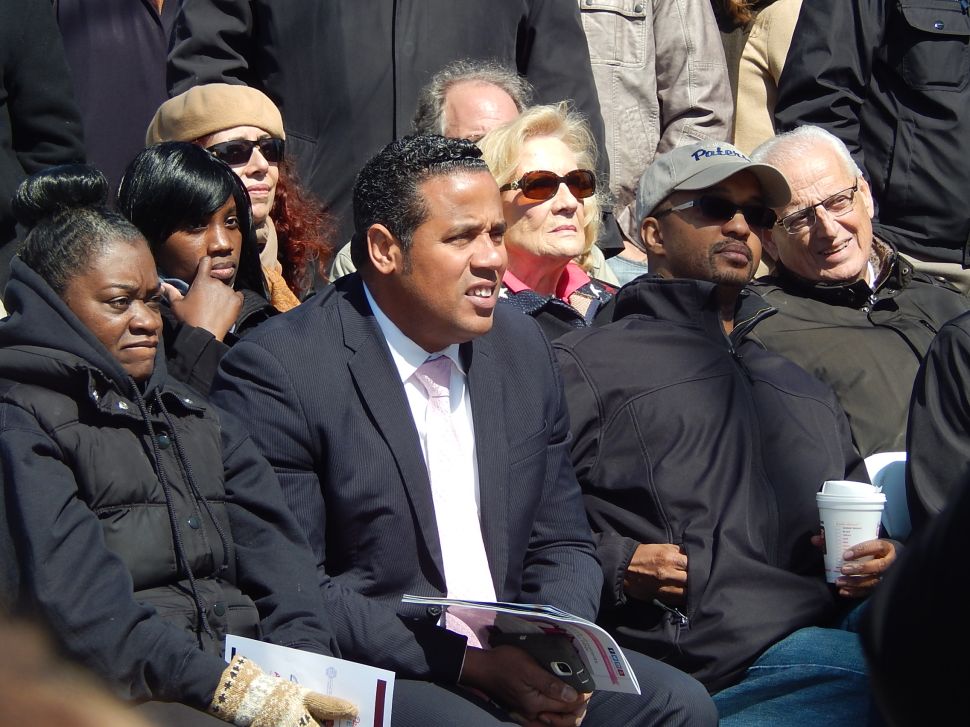