‘Where’s a glue gun when you need one?

The first rule of Clone Club: If you think you know what the hell is going on, you’re probably wrong.

So after supposedly discovering at the end of the last episode that it was not the cloners but the anti-cloners who had taken Kira, now we find that actually both groups were lying about that, in order to draw Sarah out into the open. Because, it turns out, foster mother Mrs. S actually had her the whole time, and staged it like an abduction to throw everyone off her track. But then we come to learn that the people Mrs. S trusted to get them to safety were actually working for the anti-cloning Proletheans. And…cue the Patrick Stewart quadruple take.

So nobody was actually abducted. Well, until this week, when Sarah is, tossed into a trunk by an old dude who actually works for Mrs. S, as part of an elaborate plan to get Sarah out to where they are staying in the boonies without drawing the attention of all of the various evils that are out to get her.

And in case you were scratching your head at the details of this plan, don’t worry, it’s not just you: The whole thing makes not a lick of sense. Yes, Mrs. S is probably the greatest mystery on Orphan Black right now, but even so, this is some opaque bullshit. There are roughly a thousand ways she could have gotten Sarah out there without her being followed, ways that did not involve stuffing her in a trunk. Sarah should be screaming bloody murder at Mrs. S, not walking into a house full of ex-freedom fighters with a bemused look on her face.

Besides which, the whole plan was entirely and idiotically dependent on coincidence. Sarah can’t trace a phone call without the cops—but Mrs. S had no way of knowing that Art, as the newest inductee to their little cabal, would be willing to help. (I love that the show didn’t even bother to show us Sarah telling Art their big secret. I assume the conversation went roughly something like this: “I’m a clone.” “Yeah, no shit, I’ve met five of you.”)

At moments, it is starting to feel like the writers of Orphan Black are prioritizing suspense and surprise over basic storytelling logic. The last episode ended with someone taking a photograph of Kira, ransom-demand style. But she was really never kidnapped, so who took that picture? Maybe it was birdwatcher Brenda, taking it to prove to the Proletheans that they had the kid. But in between getting stabbed in both hands and being shot point-blank with a rifle, Brenda makes it clear she doesn’t know what all of this is about—so how did she know to reach out to the Proletheans to sell Kira to them in the first place? There is some nonsense here that goes beyond the lies that Mrs. S is clearly still telling.

Let’s not even get started on the dangerous game Cosima seems to be playing. Playing nice with the Dyad Institute in order to what, spy on them from the inside? Your enemies closer and all that, sure, except does she really think she can somehow get the upper hand from here in the belly of the beast? What cards is she really holding anymore?

Where is the woman who was so insistent just last week that her blood not be sent to the Dyad for testing? Now Rachel tells her that they’ve been testing her blood all along, and she just sort of shrugs and moves on. She has to swallow her dismay—for what, a crappy lab and a gene sequence she already had access to?

At least this scene gives us another moment to marvel at Tatiany Maslany’s acting. Listen to their voices while Cosima and Rachel talk. It’s not only their accents that are different: they are speaking in different registers, Cosima deep and a bit gravelly, Rachel whispery and tight. It’s subtle things like this, more than wigs and makeup, that make it easy for us to see these characters as individuals, to forget that this is one actress playing two (or five) parts.

Which is a good thing, because both of these women remain a bit thin on actual characterization. “So, you’re gay.” Rachel says, and Cosima responds “My sexuality is not the most interesting thing about me.” Well, someone should probably have told the writers. Eyeliner and dreadlocks are not personality traits, nor, really, is being “the smart one.” Meanwhile, Rachel is basically a cipher. I think our government is wrong to treat corporations like people, but I’m pretty sure this woman is actually a corporation wearing a pantsuit.

On the other hand, a character like Alison is so fully formed that Maslany doesn’t need the crutch of a very particular vocal register to differentiate her, so instead she has a much more expressive range of voice. In this episode, as the director of  the community theater musical so skeevily points out, Alison is speaking in high, pinched tones, reflecting her anxiety as her whole world falls apart around her. Your doofy loving husband has been betraying you all along, and, oops, you murdered your best friend for no reason. I’d be hitting the (tiny little) bottle(s) hard too.

Rounding out the pack is Helena, who survived Sarah’s gunshot because she has a mirror-image body, and is now in the clutches of a new breed of cattle-raising Proletheans. They’re clearly not anti-science in the way now-dead-by-nailgun Tomas was, but their daughter still refers to Helena as “it,” and they clearly have some extreme religious views. What their “brand new day” is—and how the clones fit into it—remains to be seen. 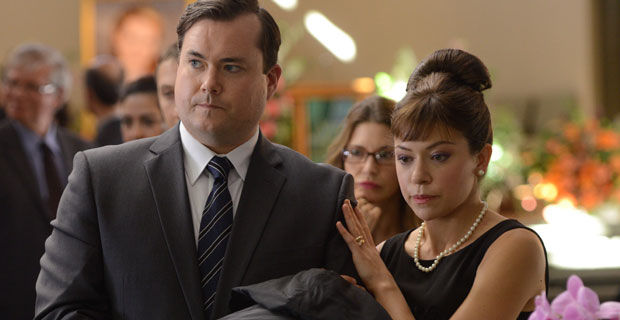