With Rizzoli due to close shop , it’s already been a rough week for New York bookstores. And now another city staple will likely be joining the list of ghosts of literary past.

Shakespeare & Co. opened as a New York chain in 1981, and has since shuttered on the Upper West Side and in Gramercy. The Broadway location opened its doors in 1987. It shares a name with the famous Parisian shop, which is responsible for the annual Shakespeare and Company literary festival. Though they are not affiliated, the Broadway version certainly emulates the artistic, local scene of the Left Bank original that inspired the likes of Hemingway and Joyce.

The current owners declined to comment on their current rent or the shop’s future. EV Grieve reported on the development on Monday, before the listing went public. One commercial leasing expert estimates the asking rent is around $30,000, though it could be slightly less if the lessees signed a long-term lease when they first opened the store.

As for the new rent? It’s almost double what the shop is estimated to be paying. While the online listing does not note a price, listing agent Brendan Gotch confirmed that it was for rent at the cost of $50,000 a month. The retail space on the first floor is about 3,000 square feet, making the annual cost per square foot $200 . There is a 2,000-square-foot basement as well, which is useable as either retail space or storage, and when factored in knocks the price down to $120 per square foot annually.

Mr. Gotch explained that while both he and the landlord are sad to see the Shakespeare & Co. go, business is business. “That part of Broadway has changed,” he said. “Their lease has expired and they’re staying on briefly until the landlord acquires a new tenant. The fact of the matter is that along with many bookstores, they are having trouble paying rents that were affordable 10 years ago when they signed these leases.”

The landlord at 716 Broadway is set for a major payday when the bookstore moves out, and can expect to net perhaps triple of what they have for the last 27 years. “Thanks to the changes in the market, [the landlord] is looking at a substantial increase in the rent they are getting, regardless of who comes or when they come,” said Mr. Gotch. “It’s inconceivable that they’ll get [the space] for less than asking. They want to be careful and be sure they get the right tenant, so they’re waiting it out with the bookstore.”

Hopefully, the bookstore has a few more months of life left. An EV Grieve tipster reported that some regulars are considering launching a fundraiser to help make up the difference in the new rent or to secure a new location for the Village staple. Gotchdoes not believe that it is realistic that Shakespeare & Co. will keep the space, noting that while he does not know their current rent, the new rent is “probably two or three times what they’re paying now.” Thus far, a fund has not been created.

After the Broadway location shutters, New Yorkers can still get their iambic pentameter fix at the remaining Upper East Side and Brooklyn College stores. 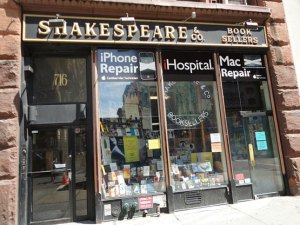