PATERSON – There was no bell for the 17th round, only stillness as the sister of the late Rubin “Hurricane” Carter stepped to the microphone in front of City Hall.

A crowd gathered in the cold below.

“Paterson,” said the Rev. Doris Carter, and let the word hang in the Market Street courtyard.

“In Paterson that’s just the way things go. If you’re black you might as well not show up on the streets ‘less you want to draw the heat.” – Bob Dylan “The Hurricane”

Since he died at the age of 76 on Sunday morning in Canada, the lyrics came back again, muttered or half quoted in close-quarters exchanges.

Now surrounded by other family members of the late boxer turned wrongfully convicted inmate on triple murder charges, turned author of “The 16th Round,” turned civil rights icon, the Rev. Carter said, “Paterson, you took a brother, a father, an uncle, a son – but today, Paterson, we forgive you.”

Her remarks came on the heels of the city’s proclamation honoring Hurricane Carter, which Mayor Jeff Jones read beneath a banner of the middleweight erected by Department of Public Works employees on the front wall of City Hall.

“What’s interesting  is the fact that this City Hall at some point in time was part of the structure of government that gave Hurricane the sense that injustice was served here,” said the mayor, referring to the boxer’s repeated run-ins with local law enforcement that culminated in the 1966 arrest of Carter and nearly 20 years of hard time.

Citing insufficient evidence and after exhaustive efforts by Carter and others, including Dylan and Muhammad Ali, a court overturned the conviction in 1985.

Carter stayed away from Paterson and died in Canada.

But his family and the mayor this evening declared him a diehard Patersonian.

Led by his daughter Theodora, members of Carter’s immediate and extended family, including niece Janice Rivera and sister Rosalie Ferguson, ascended the steps of City Hall and addressed the small crowd, which included former heavyweight contender Gerry Cooney of Fanwood.

“I saw him in recent years,” the contender said of Carter. “He was such a fighter. He was at peace. He wasn’t resentful. He lived life. I just had to come today and see him off. I miss him and I love him.”

Grateful and triumphant, Theodora Carter, facing the crowd, felt the rush of wind come over the courtyard.

“Do you feel that wind?” she cried to a roar of goodwill.

“The Hurricane is here!” 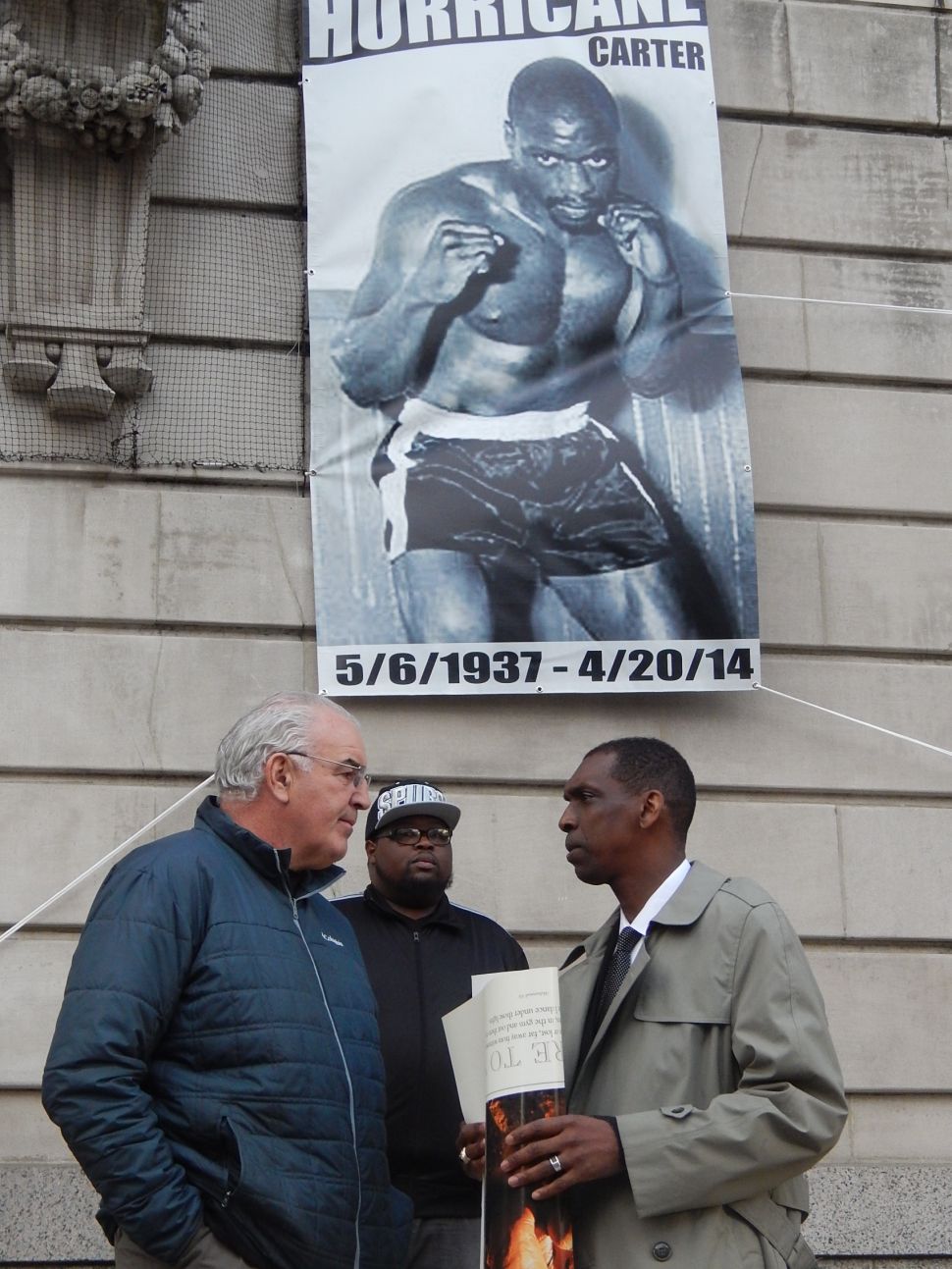