At six in the evening on Sunday, March 23, the Koch Theater was filled to the (metaphorical) rafters for an extraordinary event. To celebrate the 60th anniversary of the Paul Taylor Dance Company, the great choreographer had decided to add to his three-week season a single performance of his 1965 satiric phantasmagoria From Sea to Shining Sea, a work he described in his memoirs as “old Miss America’s wrinkles, patriotism past its prime.” It has been revived before but not with a cast of thousands, or anyway more than 50, including a few current dancers, a bunch of recent retirees and—most precious to the clued-in audience—a group of real old-timers. Senta Driver as “Sweeper”? Roars of welcome. David Parsons (looking great and adorably funny) as the welcoming “Indian Chief” exterminated without a second thought by the Pilgrims? Gales of loving laughter. Eileen Cropley, Renée Kimball Wadleigh, Elizabeth Walton, Sharon Kinney. Everybody’s favorite, Carolyn Adams (one of the “Performers in Bathrobes” and doubling as one of the “Tooth Brushers”).

All the characters are played by a dispirited, exhausted gang of performers, dressed in bathrobes, hand-me-downs, cast-offs. Iconic images flash by—Iwo Jima, Betsy Ross, Al Jolson—all drained of life and significance. It’s mordant, wicked, funny, distressing. It was the time of Vietnam. Taylor makes no direct reference—he’s nonpolitical—but he’s clearly unhappy for his country. In his book, he says, “I viewed the U.S.A. backwards, sideways and askance.”

And when the cheers died down and the audience of what seemed like the entire dance world settled in after an intermission, we were knocked out all over again by a magnificent performance of Esplanade itself, Taylor’s signature work, as fresh and revelatory as it was in 1975. Yes, the old dancers are gone, but the new ones are sensational. Michelle Fleet has perfected her central role as the skittering solo girl, hopping and back-pedaling her way around the stage when not leaping into someone’s arms—and taking for granted that he’ll be there. It must have been inspiring and challenging for her to be dancing this in front of Carolyn Adams, the originator and by coincidence another African-American. Fleet had nothing to worry about. Neither did redheaded Heather McGinley, a relative newcomer, in the central de Jong role, but then de Jong is the company’s rehearsal
director, so McGinley learned from the source.

By the time Esplanade was into its amazing climax—what Arlene Croce called its “paroxysm of slides and rolls across the floor”—the audience was once again ready to explode with joy. Once more, Croce nailed it: “The dancers, crashing wave upon wave into those slides, have a happy insane spirit that recalls a unique moment in American life—the time we did the school play or were ready to drown in the swimming meet. The last time most of us were happy in that way.”

Paul Taylor’s Americanness more and more seems to me an essential, if not the essential, thing that sets his work off from that of most other choreographers, which may be why it seems harder for the English and the Europeans to take him to heart—they’re more at home with the abstractions of Cunningham or the mythic realms of Graham. (His heir in this regard is Twyla Tharp, who danced for him until she went off to be her own kind of American.) Dance after dance is situated in our country and its popular culture—from Company B (the Andrew Sisters) to Black Tuesday (the Depression) to the all-American horrors of Big Bertha; from the gangsters of Le Sacre du Printemps (The Rehearsal) to the barbershop quartets of Dream Girls; from Alley Oop and that girl in the polka-dot bikini in Funny Papers to the traumatizing born-again Christianity of Speaking in Tongues to his most recent masterpiece, Beloved Renegade (Walt Whitman and the Civil War) to his two new pieces this season—both minor—American Dreams (Stephen Foster) and Marathon Cadenzas (dance marathons of the ’30s). And others. He’s American to the core, drenched in our decencies and our corniness (anathema to foreigners), deploring our violence and ugliness, and so both celebrating us and lashing out at our decadence. He knows us well, because he knows himself.

This season, his third on the stage of
the Koch, where the company looks so at home and so at ease, Taylor showed us 23 works—a cornucopia, and yet a fraction of the 140 pieces he’s made in these 60 years. The earliest was a revival of Fibers, from 1961, when he was still dancing for Martha Graham, and her influence is instantly apparent. There’s a bare, spiky tree-like construction inside which a man is hovering—immediately you think of Graham’s powerful Cave of the Heart. Two men, two women, music (unidentified) by Schoenberg, striking, colorful costumes and masks by Rouben Ter-Arutunian—it’s a drama of failed passions, with a touch of the mythic unattached to any specific myth. A major Taylor rediscovery? No, but a fascinating look at what he learned from Graham and where he was artistically a year and a half before his breakthrough Aureole. Fibers hasn’t been seen since 1963—never underestimate the crucial importance of continuity in a dance company—and it should be seen again.

The most recent work, apart from the new ones, was last year’s Perpetual Dawn, which if it’s not a masterpiece is a completely pleasing and touching group dance of couples finding and enjoying each other in a pastoral setting and mood. It’s proved that it’s a keeper. The masterpieces were with us, though—though never enough of them; I could easily name 20 from the repertory, an amazing number. Who in our time, other than Balanchine, can claim as many? This season we saw Esplanade, of course; Sunset, dearest to my heart; and Cloven Kingdom, Arden Court, Mercuric Tidings (though I’m still hoping for the return of the original costumes). Others would name Piazzolla Caldera, BlackTuesday and the ravishing Airs (with, on one occasion, a fragment from it danced charmingly by that star couple from City Ballet, Tiler Peck and Robert Fairchild). It would make me sad to name the missing treasures. I console myself by remembering that we’re now only 49 weeks away from next year.

Two enigmatic works were back. I can’t claim to “understand” … Byzantium, if any dance work can be “understood,” but whenever I see it, I sense that it’s charged with meaning. In three sections—“Passing,” “Past” and “Or to Come”—it encompasses our lives today in the rough-and-tumble of modern athleticism; the hieratic stylizations of Byzantium both in the spectacular brocaded costumes of William Ivey Long and the majestic rigidities of the dance vocabulary; and the meeting of the two as the entire cast—moderns and ancients together now—witnesses the appearance of a new Saint among them. The other work, Dust, is equally mysterious, but although it’s constantly suggestive, I find it interesting rather than resonant.

I had forgotten just how funny and clever Funny Papers is—swaggering Robert Kleinendorst as Popeye the Sailor Man; adorable Eran Bugge and cute (sometimes too cute) Aileen Roehl and their “Itsy Bitsy Teenie Weenie Yellow Polka Dot Bikini”; “I Am Woman,” set to the voice of the great Jo Stafford in her mock-cocktail-lounge avatar as Darlene Edwards—it’s not right that she goes uncredited—was first strutted to by Michelle Fleet, then by Francisco Graciano, every bit as much a woman, and hilarious; finally, everyone romping to one of the great songs of the century, “Does Your Chewing Gum Lose Its Flavor (on the Bedpost Overnight).” Roll over, Gershwin, Kern and Berlin.

But the greatest miracle of the season, apart from the miracle of Paul Taylor’s genius, is the ongoing strength of his company. The glorious Parisa Khobdeh was out with an injury, but in stepped a new girl, Christina Lynch Markham, more than holding her own in what seemed like a dozen new roles. Kleinendorst is a totally committed artist and the funniest guy on stage when he wants to be. The newest young man, Michael Novak, is utterly wonderful—again, totally committed, with a seemingly limitless range and an entrancing stage presence. Laura Halzack now dominates work after work, her beauty and elegance morphing into exciting sexiness. And how many times can one write of the utter brilliance of Michael Trusnovec, now the senior member of the company and as riveting today as he was 15 years ago when he joined up?

They’re all superb dancers, and those of us who from bitter experience are terrified of losing our favorites have learned to trust the Taylor operation to come up with replacements who, in a couple of years, will become our new favorites. Genius, yes, but also the most extraordinary practicality. That’s why today we can sit back and pick and choose from works a year old, a decade old, half a century old. What next from Paul Taylor? He’s only 83. 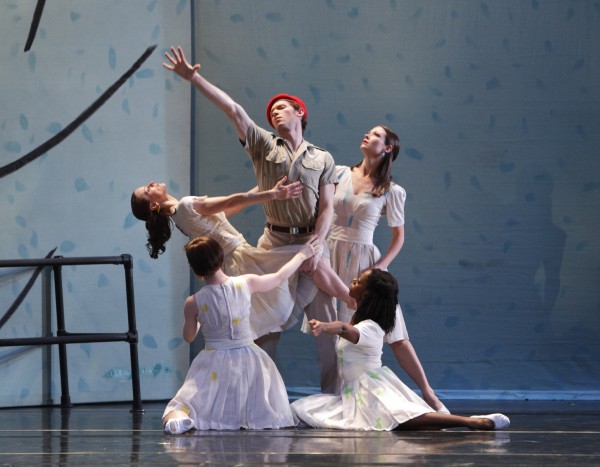