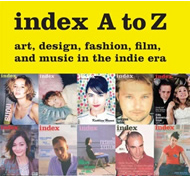 Over at Blouin Artinfo, Scott Indrisek has a great little Q&A with Peter Halley about Index A to Z, Rizzoli’s new compendium of material from Index magazine, which the artist started with writer and curator Bob Nickas in 1996 and ran through 2005. Lots of good, inspiring stuff in the interview, but here’s one tasty excerpt:

I never thought of making art as difficult. To me, it’s more like play. It’s about being — as they say — in the zone. It’s called artwork, but it would be better if it were called art play. Making a magazine is definitely more complex. When Andy Warhol said, “Being good in business is the most fascinating kind of art,” I didn’t think he was talking about money. I thought he was really talking about how challenging it is to work with other people. People, unlike cadmium red, are different every day. With Index, I was the publisher and the de facto creative director. The challenge was to chart a course among all the great ideas the contributors were bringing to the magazine without imposing my own vision too much.

Read the whole thing over at Artinfo.