A very unpleasant thing to wake up to (NYUSJP)

Passover just ended, but Jewish students at NYU got another brutal reminder of their past on Thursday.

The New York Daily News reports that the group Students for Justice in Palestine slid eviction notices under the doors of students living in two residence halls, including a predominantly Jewish one. The fliers were reproductions of notices distributed to Palestinians by the Israeli government.

The notices advised students to vacate their dorm by midnight on Friday, when it would be demolished. They then gave a historical background for their action, stating that “Eviction notices are routinely given to Palestinian families living under Israeli occupation for no other reason than their ethnicity.”

Though the fliers said “This is not an eviction notice” on the bottom, many students were spooked. “It’s an attack on the Jewish community,” NYU sophomore Laura Adkins, who made the fliers public, told the Daily News. “Parents of prospective students have called me asking, ‘Is my student safe going to NYU?’”

The university is investigating the incident. “A flyer titled ‘eviction notice’ anonymously slipped under doors at night is not an invitation to thoughtful, open discussion,” NYU spokesman John Beckman said.

The Anti-Defamation League also condemned the SJP, saying they “are creating tension, intimidating students and fostering a hostile atmosphere on campus.”

For their part, the SJP said they wanted to “draw attention to this reality Palestinians face daily.”

Let’s hope this is the end of these hateful surprises. 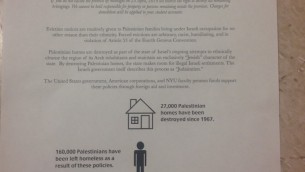