This week on The Real Housewives of New York City we have a burlesque show, the reappearance of Luann, the mysterious presence of Amanda Sanders, “image consultant,” and the promise of a fistfight between Heather and Aviva. For anyone struggling to hold on to their optimism and/or sanity during this rainy spring after the end of a brutally long winter, it’s enough to make you want to climb into the television. I would suffer through an eternity of Sonja Morgan’s burlesque numbers for an hour of sitting in the sun by a pool, sweaty glass of rosé in hand.

Anyway, because a woman’s work is never done, we first check in with Sonja, who is rehearsing doggedly for her charity burlesque show (???). She’s late and her choreographer and backup dancers amuse themselves by making fun of her moves, which might be sad if their impressions weren’t so accurate.

“I have my own way of moving, very confident,” says Sonja, echoing the brain of every drunk person in every club after 2:00 AM. She compares herself to Liza Minelli, which I’m actually  going to allow.

In the Hamptons, Heather, Kristen and Carole are getting surfing lessons from a couple of dudes who look like Geico cavemen by way of Laguna Beach. They are all very bearded and shaggy and sending the ladies into a tizzy.

“This is so much fun!” Kristen says as she lies on her back attempting to yank her wetsuit on while the cavemen stand around, bemused.

Elsewhere in the Hamptons, Sonja arrives at her “borrowed house” with a generous handful of interns in tow.

“One of the perks of being an intern is traveling with me,” she says, which apparently entails getting the car out of storage, realizing the battery is dead, jump starting it, and reattaching the license plate. While this sounds like the height of glamour and elegance and I can completely understand why hundreds of 19-year-olds would jump at the chance to be a part of it, this intern program seems like a really inefficient way to run one’s life.

For starters, no one seems to know what they are doing. “The drag queen is coming,” Tyler the Uncommunicative Bro Intern confirms, but he has no answer to the follow up question “Which one, the one we met at Starbucks?” Sonja tells us that Ramona is in Africa, and will therefore be absent from the episode, and my interest in what is about to unfold temporarily plummets, though my interest in seeing whatever Ramona is currently up to in Africa is through the roof. Maybe next week?

Sonja heads to dress rehearsal. “I’d love to meet Eminem sometime,” she says. She fires her backup dancers. “Whatever makes you happy, baby,” her choreographer tells her. This episode legitimately made me feel like I was on Quaaludes. I had to pause it and take a lap.

“This is cool — it’s like an airplane hangar,” Heather says as she arrives, expertly shading the venue, and then I can’t focus on her anymore because I hear a familiar, haunting rasp. Behold, it’s Luann, looking fabulous and ready to start some drama. Meanwhile, Sonja is backstage trying to learn the words to “Let’s Have A Kiki” and upsetting the interns with her gyrations.

In the audience, Amanda the image consultant is drunk, complaining about her dirty martini, and confusing everyone with her presence.

“I don’t know about a dry martini in a plastic cup,” Luann says, reminding us why we keep her around.

Sonja appears to be literally melting backstage as she Googles burlesque dance moves on an iPad and mumbles “So so, oui oui, mothertrucker.” What is this performance???? The show opens with Sonja strutting around the empty stage in a corset with no apparent musical accompaniment, and the shot that follows of Harry sweating profusely and taking a deep drink of champagne from his plastic cup is my spirit animal.

“What Sonja lacks in professional training, she more than makes up for with balls,” Carole says kindly. Sonja is delivering her lines in a southern accent straight out of the drunkest community theater production of Gone With The Wind of all time. The way this scene is edited makes the number appear to go on for hours.

“That’s what menopause looks like” mutters Amanda, on her eightieth dry martini, immediately making me take Sonja’s side. You know how no one else is allowed to make fun of your siblings but you? That’s what this is like. Heather also sees this behavior and doesn’t care for it.

The follow day, Kristen invites the girls to her house to try on swimsuits from her friend’s new line, giving Sonja the opportunity to hit on a defenseless Argentinian man and introduce the girls to one of her interns, who is a person of color, serving them drinks, and being addressed as “Pickles.” This seems…questionable, not least because I don’t know how she’s going to get college credit for this gig if Sonja has no idea what her real name is.

The final act of this bender of an episode is a barbecue at Luann’s, where Heather’s sexy personal trainer hangs out with Carole, making everyone jealous. Amanda’s interest in particular is piqued. “I like brilliant men but brilliant men can also look really good naked,” she says, and still no one steps forward to drown her in the Atlantic. How is this happening?

Carole takes the opportunity to apologize to Luann for suggesting last season that she wasn’t good enough to get a free Naeem Khan dress (true) and to her credit, Luann is cool about it.

In less cool territory, Aviva is telling people about her argument with Carole over #BOOKGATE, laying out the facts in such a way that it makes Carole seem like a total psychopath. Sonja screams about how amazing it is that Aviva wrote a book and how Carole is the devil for not supporting her enough. This excites Aviva so much that they kiss. Seriously.

Thankfully, Heather calls out Aviva for her part in the argument. Aviva responds by accusing Heather of 1. Threatening her, and 2. POINTING at her, which I’m pretty sure are two of the deadly sins. #POINTGATE. Aviva screams that Heather should lower her voice. Luann tries to get everyone to take it down a notch and is ignored.

“Not everyone is as equally brilliant or as great of a writer,” Amanda says, apparently implying that Carole is jealous of Aviva’s writing ability. Heather responds by challenging her to a fight. FINALLY.

Next week: Heather goes on a murderous rampage, Sonja’s tooth falls out and Aviva visits the farmhouse where her leg was cut off. Drama! Carnage! This show has everything! 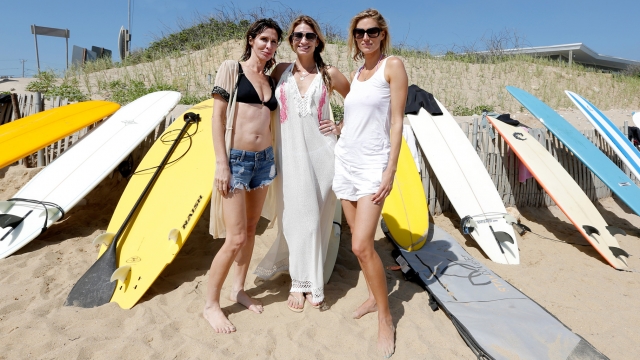