This week on The Real Housewives of New York City, Aviva Drescher somehow became the lead character on this show. She’s driving all the fights, she’s hogging all the “personal growth” plotlines and she is currently eclipsing all of the other Housewives’ efforts to promote whatever business ventures they’re into this season (I’m going to go ahead and refer to Leggy Blonde as a “business venture” rather than a book mainly because I think Aviva would agree with me if she heard me say it and then not realize she ought to be offended until I had already made my escape). All I’m saying is, Ramona needs to come back from her spiritual retreat in Africa and wrest control of her show back ASAP.

When the episode begins we return to the fight at Luann’s. Heather is yelling “Luann, you gotta get this bitch out of here,” meaning Amanda Sanders, Image Consultant. Sing in me, muse! This is why she is the best. She won’t let it go, despite Sonja’s best efforts to distract her by informing her that she isn’t wearing any panties.

Meanwhile, Carole and Aviva are having a separate fight, in which Aviva continues to hurl accusations at her of not being a “well wisher.” Why does she need Carole to bless her every business venture? She also accuses her of not being supportive of women, and Carole takes that as an opportunity to take her leave.

“Do you want some fruit tart?” Luann asks.

Instead, Aviva passive aggressively toasts to “supporting women” and “people having the courage to write novelty books for big advances” and so on, which is annoying, but passive aggressive toasts are hilarious and I have no choice but to respect them. Heather tells Aviva she started the fight with Carole, which everyone can see is true whether or not they were at THE LUNCH, which is spoken of as though it was the site of Franz Ferdinand’s assassination. Aviva walks away while Heather follows her, still yelling. Reid starts screaming at Heather: “She wrote a book! She wrote a book!”

“I never said to her, ‘Who wrote your book?'” Aviva says, resolutely not getting it.

Amanda Sanders, Image Consultant is back in the mix telling Heather she needs to get over herself.

“Nobody likes you, no one wants to be around you, so don’t tell me nothing, motherfucker,” Heather spits back. Sonja’s Uncommunicative Brotern Tyler watches this while slooooowly unscrewing the cap on a water bottle, failing to suggest that they all play a conciliatory round of King’s Cup in which everyone has to take a drink every time someone utters the word “book.” Look for my book, Defusing Conflict The Frat Party Way, out from Aviva’s publisher in 2016. Instead, everyone takes their leave as Luann lies that she’s going to drop all the booze off at Sonja’s.

The following day, Sonja is hosting a brunch at her borrowed house and hangs out in the kitchen with a possibly post-coital Harry Dubin. She pulls up her long sweater to show off her bathing suit and explains that she is currently competing with Amanda Sanders, Image Consultant for Harry’s affections. Ugh, let her have him!

The other ladies show up in high spirits.

“Two lovely parties,” Aviva says, referring to the barbecue disaster the night before and Sonja’s brunch that day. “How lucky are we?” She clearly thinks this is a breezy move but it just makes her look kind of sociopathic. Soon enough we are back on her favorite subject, about how brave it was of her to write the book and how dare Carole ruin the lives of amputees everywhere by suggesting that it might have gotten a little polish from a professional. Sonja’s tooth is so tired of hearing about #BOOKGATE that it straight falls out of her mouth. It takes two interns to help her put it back in.

Back in the city, Heather, Carole and Kristen shop for outfits for the Coney Island Mermaid Parade. Meanwhile, Aviva and Sonja visit the dermatologist to get their faces lasered off like two Bond villains. They have these masks on that look like papier–mâché coffee filters, and watching them gossip about Carole while both looking like Michael Myers on a spa retreat makes me giggle. Then Aviva accuses her enemies of committing VERBAL RAPE. Yeah okay.

Aviva takes her kids to Little Shop of Crafts, which looks just like a pottery painting studio I used to work at in college, and I will not let Aviva’s cute kids nor my nostalgia for days spent practicing calligraphy fonts on broken pieces of pottery and helping little girls who were painting mermaid figurines make the “good eyes” (eyeliner + lashes) sway me from being annoyed by her. Luckily, the spell is broken when Aviva tells Reid she was contacted by a plot device — the girl who was with her when she lost her leg 35 years ago. Turns out she’s been thinking about her and would like to meet. This could be a genuinely moving moment, but so far Aviva is framing it like she is going to go upstate to release this woman from the crippling guilt of being the person who was there when AVIVA DRESCHER LOST HER LEG, aka the most important event in American history since the revolution.

Elsewhere, Sonja lights an “abundance candle” and hides her vibrator. Her friend, a costume designer, comes over and it’s amazing to see Sonja interacting with someone who isn’t 20 years old in that house. They go through Sonja’s bonkers closet to find something for her to wear to the parade. Sonja puts on a red wig and tries to seduce her costume designer friend. Later, over footage of two interns watching her pop her zits, Sonja tells us “You really know how you’re living by your skin and by your bowel movements,” which I hope is the title of her next book.

In the final part of the episode Aviva goes with Reid upstate to face her fears, and based on the footage we see from the car ride I can only assume she talks about herself the whole way there. She makes sure to tell Reid/us that it was this girl’s idea to go on the machine that caused the accident.

“She says there’s not a day that goes by that she doesn’t think of me,” Aviva says, clearly psyched that she looms so large in this woman’s mind. Reid does an admirable job of acting like he hasn’t heard this story a thousand times, which gives me some insight into why this marriage must work.

At the Mermaid Parade Luann shows up looking like an actual alien. She and Kristen board the wrong float full of drag queens and alcohol, then find the correct float, but that one is full of high school cheerleaders and one lonely, texting student athlete, so they hightail it back to the drag queens. Sonja has broken another tooth. Carole, as the designated queen of the parade (“That’s such an honor!” – Kristen), gets to ride in some other contraption with Judah Friedlander, who’s the king, which seems like it would be pretty fun. She has the ladies take some kind of oath of friendship on the beach, noting happily that Aviva isn’t there.

Back in Franklin, NY, I feel like a monster being so unsympathetic because of course this story is horrible and traumatic, but Aviva has been dining out on it for almost 40 years, you know? The line has to be drawn somewhere. Her childhood friend seems really nice and apologetic about the whole thing, and Aviva FORGIVES her and tells her she SAVED HER LIFE. She asks to see the scene of the crime and her friend is like, f’real? They go to the barn and look at the conveyer belt together.

“This is such a meek machine to have done such damage,” she says, reveling in her specialness. Reid and Aviva’s friend seem kind of weirded out by the whole thing. Anyway, sincere kudos to Aviva for being brave enough to revisit the scene of such a catastrophic event in her life, and I hope she is able to find some peace from it, and maybe consider talking about something else for two seconds. But we all know that she won’t — she has a book to sell, after all. 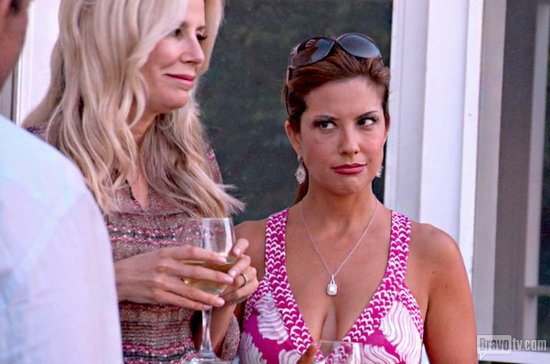