Hoo, boy. This episode of The Real Housewives of New York City was about what happens when people stop being polite and start getting really weird about their houses going into trusteeship.

We open in Sonja’s rental house (the Hamptons are really an additional character this season, like Baltimore on The Wire or Chicago on The Good Wife. In this case they serve as a sort of a sunny purgatory where everyone presumably gets sun poisoning and acts completely insane). Anyway, Sonja is having a few girlfriends over to sunbathe by the pool.

“I wanna do the coconut water, it makes you regular,” she says as she bustles around the kitchen, Tyler the Uncommunicative Bro intern underfoot like a golden retriever. When Aviva arrives she notes that Sonja has hired a bartender who has a real half John Mayer, half serial killer vibe to make drinks for this party of two. Aviva is so happy to be invited anywhere that she totally overdoes it with the compliments, telling Sonja that everything she does is “so chic,” like, relax, the spread is a couple of cocktail napkins and mixed nuts by the pool.

Ramona was apparently supposed to join them but she calls Sonja to beg off. Sonja isn’t having it and hangs up on her as she’s mid-excuse. This doesn’t bode well. Meanwhile, Luann is showing Carole and Ramona around a “designer house” where each room has been decorated by a different designer in order to, in Luann’s words, “raise money for breast cancer, and awareness.”

Ramona goes berserk pretty much immediately, peeling the wallpaper off the walls, throwing Luann’s custom designed plates into the pool and telling everyone that Sonja’s house has gone into trusteeship. Both Carole and Luann note that if Ramona is the person bringing them this news, all is not well in Ramonjaland.

Later that day, Carole and Kristen join Heather to day drink while her husband takes the kids to the beach. Carole tells Heather what Ramona told her at the designer house about Sonja’s financial problems, and Heather also astutely notes that there is a rift growing between the Wonder Twins.

Kristen goes to see a modeling agent and it’s a completely unremarkable scene, except he’s a total wang who is clearly peacocking around because he’s in front of a camera. He examines her portfolio before telling her “I think there’s still some mileage there.” THE #PATRIARCHY IS SO REAL.

At a random midday wine tasting with Aviva and Luann, the seeds of Ramonja’s discontent are further sown. Sonja rolls in wearing a white bikini and gauzy cover-up like she just walked in from the ocean, Ursula Andress-style. She’s all air kisses and babbling and pointedly ignores Ramona, who notes that “there’s a chill here, and it’s not from the wine.”

Somehow, despite being in a vineyard so beautiful I would be fine with it being the last thing I saw before I died, the ladies sit down to grill Sonja about her various business ventures, specifically Schrödinger’s toaster oven, which has driven much of her storylines on the show over the past few years.

“When I went to the department stores [to pitch it] they said ‘Sonja, you’re so much bigger [than toaster ovens],” Sonja exclaims, because what most department store buyers are concerned with is given potential vendors advice on building their empires.

“The reason people buy my toaster oven after they get the recipes in my newsletter — sex!” Sonja says, as though it’s the most obvious thing in the world. “The yellow and white diamond collection!” I start to wonder if this is editing or if I’m having an actual stroke by association. Eventually Sonja shuts down the conversation, complaining about negative energy, and I have to agree with her. Just drink the wine, ladies.

In a less crazy part of New York, Heather comes over to Carole’s to bitch about work, eat pizza and drink tequila, which I think is the most normal thing ever depicted on any show in this franchise. Carole’s neighbor, TRIPP SWANHAUS, who IMDB tells me has several producer credits on MTV’s masterpiece of the early aughts, Room Raiders, comes over to ask Carole to watch his adorable dog Scout. Why aren’t they dating? I’m shipping this couple super hard. Swanziwill!

Anyway, Carole announces to the group that she needs a facelift, a moment which was teased to death in the promos but — JK  — she means an apartment facelift! Later she will have two contractor bros over to talk about putting gold leaf on her ceiling and putting her office in her kitchen because “she doesn’t use it.” Ugh, this Sex In The City shoes-in-the-oven persona is the most grating part of Carole’s “personality” on the show, and I will not waste any more time talking about it.

Ramona comes over to Sonja’s to find her doing some home improvement of her own. Apparently after being in the Hamptons for two weeks the place is a total dump (I NEED the Sonja’s Interns spinoff depicting the kind of orgies/”trying on weird outfits” montages go on when she’s not around) and so she’s scrubbing the toilets and wringing out swimsuits in the bidet. As you do.

“I’m having a glass of wine because I want to have a serious conversation,” Ramona says. She tells Sonja that she knows she might have to leave the house soon (BECAUSE THE BANK OWNS IT NOW) and she should maybe start looking for other housing (SO THAT SHE IS NOT LEFT HOMELESS OR, MORE LIKELY, FORCED TO MOVE IN WITH RAMONA).

Miscellaneous horrors: Aviva, Harry and Reid come together for a family dinner before her oldest son Harrison heads off to sleepaway camp; Reid reminisces with a faraway smile about sneaking into the girls’ cabins at his camp to “play with them” as a youth; Sonja’s 23-year-old boyfriend stands her up for dinner so she calls an intern and makes up a reason for her to meet her so she won’t have to deal with the crushing loneliness of being truly alone; the less that is said about Carole pranking Heather, Kristen and Luann with a fake engagement while all four wear furry white bathrobes and drink vodka in an ice bar, the better.

Here’s where the magic happens: all of the ladies are meeting up for a spa day hosted by Sonja “pay no attention to the horrifying financial situation behind the curtain” Morgan. Ramona has gotten her hair done pre-spa, so her perfect Chekhov’s waves are obviously going to get snatched off her head or something in the next five minutes. While Luann, Heather and Carole relax in dirt baths and other sundry spa activities, Sonja and Ramona start fighting.

“Sounds like Ramona’s jealous,” Kristen jokes from the pool, clearly not expected Ramona to FLING HER GLASS OF WINE IN HER FACE. Kristen reacts the way any self-respecting teenager would: by splashing Ramona in the face with hot tub water and ruining her ‘do.

“I teach my kids not to hit, not to throw — did Ramona miss that memo 65 years ago?” Kristen says. LOL. That’s it for this week. but it’s clearly on. Let the age wars commence! 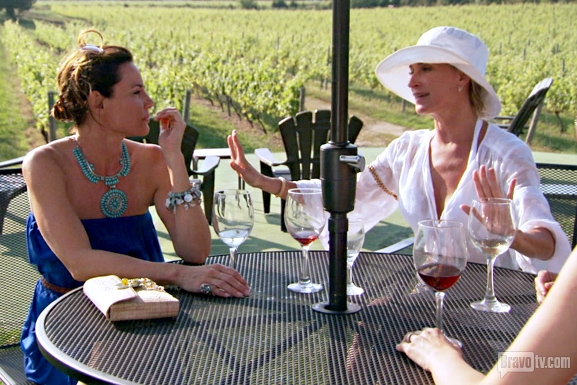