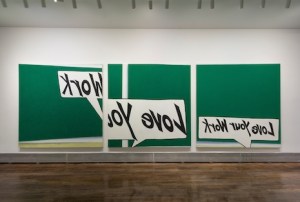 A small piece of fresco on panel hangs between the door and a projected rectangle of light. The projection is clean and pale, but the horizontal brushstrokes of the fresco are the kind of dense, marine color that might have been used to symbolize a green screen in the Renaissance. A comic-strip-style speech balloon extends across the bottom with a chipper, black-and-white phrase: “Love Your Work.” Inside the gallery is Love Vibe, a single installation of six oil paintings, each just over six feet square, showing the same speech balloon in reverse against notional panels of a similar dark green, on white walls, over a floor the color of spoiled butter. It’s a painting of looking at painting as a social performance, with “love your work,” thanks to the legions of jaw-clenching schmucks who try to achieve some petty glamour by dropping their pronouns, operating both as the empty tribute of insincere well-wishers and the mean-spirited advice, from society at large, to anyone lucky enough to be making art instead of driving a truck or stealing on Wall Street. At least, that’s how the phrase sounds by itself; but captured in Ms. Feinstein’s sweetly goofy balloons and reiterated in six earnestly unflattering angles, it’s almost tamed. 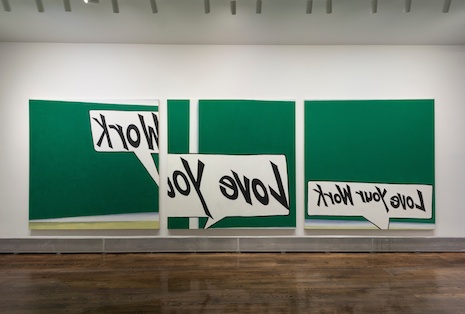