The author meets with Rwandan President Paul Kagame and Samantha Power, United States Ambassador to the United Nations, in Rwanda today to commemorate the 20th anniversary of the Rwandan genocide. (Photo courtesy of Rabbi Shmuley Boteach)

KIGALE, Rwanda — Today is the twentieth anniversary of the start of the Rwandan genocide, which took the lives of nearly one million Tutsis between April and June, 1994. This mass slaughter of men, women and children was the fastest killing spree in world history, with 10,000 murders each day, 400 per hour and 7 per minute. As a Rabbi committed to fighting genocide, I have the honor of being invited by the government to deliver the prayer at the National Commemoration ceremony in Kigale stadium.

Memorials to the carnage dot the Rwandan landscape. Not far from the capitol, at the Ntarama Church, approximately 5000 men, women and children sought refuge from the Hutu Interahamwe militia. After throwing grenades into the church, the murderers axed, macheted, clubbed and speared every last person to death. Today, their skulls, bones, coffins and blood-soaked clothing fill the church as a lasting testimony to the lives lost.

At the Murambe Massacre Memorial nearly 500 lime-preserved bodies exhumed from a mass grave—many still in a crouching position to protect themselves from the machete blows—lie wretchedly in the rooms of an abandoned school where 45,000 were murdered. There they remain, silent witnesses to man’s brutality to his fellow man, finding no rest even in death.

These are gruesome displays, difficult on the eye, searing to the soul. But horrors of this magnitude dare never be forgotten lest they be repeated.

This is especially true if the world is to extract any lesson from the international abandonment of the Rwandan people during the genocide.

The United Nations, through Kofi Annan, its peacekeeping chief, forbade the UN commander, General Romeo Dallaire of Canada, from taking any action that would prevent the genocide. In a series of cables, Dallaire pleaded to disarm the militias but the UN leadership resolutely opposed any intervention and ultimately ordered the bulk of its peacekeepers out of the country, leaving the Tutsi to their diabolical fate.

The United States did not convene a single meeting of its senior White House staff throughout the three months of the genocide and refused to destroy, or even merely jam, the RTLM radio antenna through which the genocide was broadcast. At Murambe French soldiers who promised to protect the tens of thousands of refugees disappeared and were soon replaced by a machete-wielding militia.

What the Rwandan people quickly learned is what the Jewish people and Israel discovered: International guarantees of protection and intervention can be meaningless. It is the same lesson we derive from the 150,000 innocent Arabs who have been slaughtered by Bashar al Assad with the UN Security Council passing not a single resolution in condemnation. And the same is true of the 10,000 men and boys of Srebrenica who in 1995 were massacred at the UN-declared safe zone.

Fittingly, therefore, it was the heroic efforts of General Paul Kagame, now Rwanda’s President, who ended the slaughter when he led his RPF troops to rapidly conquer the blood-soaked country and put an end to the genocide.

Today Rwanda is a land of growing racial harmony where ethnic differences of Hutu and Tutsi are giving way to a unified identity of proud Rwandans. It is also a nation with one of the fastest growing economies in all of Africa and indeed the world. But for all of that, the ghosts of genocide past can never be put to rest and the victims’ cry reaches beyond the grave, beckoning the international community to redeem their deaths by ensuring that, two decades later, no similar mass murder ever be allowed again.

Our world is currently grappling with continued slaughter on an industrial scale, including the use of poison gas against children in Syria and the mass starvation of untold millions in North Korea. Last September, in New York, I moderated a discussion on genocide with Elie Wiesel, the Nobel Peace Laureate, and President Kagame. Both Prof. Wiesel and Pres. Kagame noted that there had not been a single United Nations Security Council Resolution against the Syrian government’s use of poison gas against its own people, even as the toxin brings to mind the worst horrors of the Holocaust. Evil in so many parts of the world continues to be excused or overlooked. Guilty parties literally get away with murder.

Increasingly, we are witnessing reluctance on the part of the world’s great powers to use force to stop mass murder, even when diplomacy has failed. Non-violent passive resistance, such as that practiced by Gandhi, Martin Luther King and, most recently, by the late great African leader Nelson Mandela is applauded while leaders who employ armed resistance to prevent genocide are more often than not tainted by the fight.

It would, of course, be preferable if all collective slaughter could be stopped by non-violent means. But the three great leaders mentioned above benefited from systems that, though criminal and unjust, still provided other recourse for righting horrible wrongs. Segregation in the United States, for example, though enforced by racist law enforcement and courts, could ultimately be appealed to Federal courts and Congressional legislative action, which ultimately outlawed Jim Crow and was enforced by federal marshals. Opponents of Apartheid used the power of the media to promote international condemnation of the abominable practice of discrimination based on skin color. But none of those tactics could have prevented the genocide of the Tutsi or the holocaust of the Jews. What was required, and what was ultimately missing, was armed international intervention to stop the killing, which is what Kagame and the RPF ultimately provided.

We all want peace. But there are two ways of achieving it. One is for all parties to put down their weapons. The other is to neutralize the party that refuses to put down its guns and whose entire existence is dedicated to the slaughter of innocents.

The world’s greatest problem today is also its oldest. Evil continues to stalk the earth and wicked people continue to murder the innocent.

Let the lesson from Rwanda be that none of us can afford to remain blind or silent.

Rabbi Shmuley Boteach, “America’s Rabbi,” whom Newsweek and The Washington Post call “the most famous rabbi in America,” is the international best-selling author of 30 books. In May he will publish Kosher Lust: Love is Not the Answer. His website is www.shmuley.com. Follow his trip to Rwanda on Twitter @RabbiShmuley. 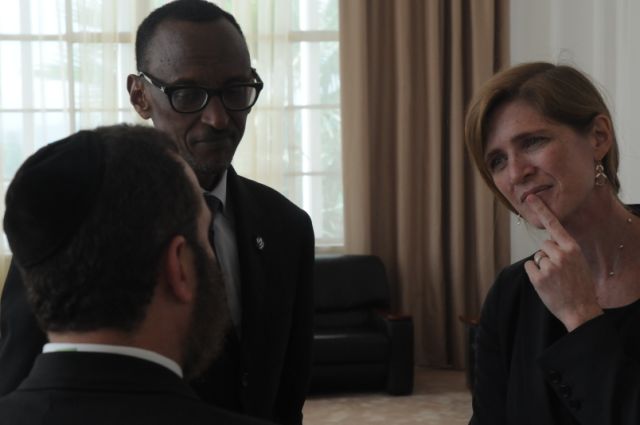