That masterpiece of Washington high-stakes machinations and trickery, Scandal, can be hard to follow. Those fixers and movers and shakers toss buzzwords around just like real Washington insiders! Last night’s episode seemed especially rife with Scandal-esque concepts, so to help out viewers at home, this week we’ve compiled a helpful Scandal Glossary Guide. You’re welcome:

Penultimate: Many people misidentify this word as meaning “really ultimate,” but it actually means second-to-last. “Flesh and Blood” is the penultimate episode in this seemingly never-ending season of Scandal.

Drunk Mellie: Drunk Mellie automatically improves any Scandal episode by several notches. The character appears when the FLOTUS Mellie Grant starts drinking liquor out of coffee cups or fancy beveled glassware in the daytime. This week Mellie’s constant drunkenness is brought on because she’s still sulking after Olivia and Fitz broke up the most fun she’d had in years, her fling with Andrew. Drunk Mellie is excellent at pulling out one-liners that everyone (most likely the home-viewing audience) is thinking, as at the episode’s start when Fitz needs to stay in the White House because someone is out to kill him. She cracks: “You think it’s just out there?” Or at the end of the episode when Fitz and Olivia bicker onstage about why he left the White House, Mellie interjects: “If we’re going to die, can we do it now so I don’t have to listen to you two?”

But Drunk Mellie can also help bring certain revelations to light. No longer able to contain her anguish over the possibility that Big Jerry may in fact be Little Jerry’s biological father via rape (making Little Jerry’s name extremely unfortunate), she leaks a paternity test possibility from the White House. Savvy Olivia, fortunately back in powerhouse mode, figures out the truth behind Mellie’s leak (“You’re not an idiot and you are never reckless”), releasing all of Mellie’s alcohol-fueled Fitz rage: “I have been destroyed while I have made him president!” Liv, realizing that Mellie is right when she says, “You owe me, Liv. You owe me everything,” promises to clean the mess up (again with that bucket!) and find out the truth for Mellie.

Little Jerry’s man chowder: In light of Mellie’s paternity test leak, Sally Langston’s dastardly campaign manager Leo Bergen hires young trollop Mackenzie to get a DNA sample from the younger Grant, in exchange for admission to Harvard. Instead of stealing his toothbrush or swiping a few hairs from his hairbrush, she has sex with him (before midterms!) and gives the aforementioned sample to Leo. Mackenzie seems like a little Mellie Grant in the making! Even Leo gets a kick out of her.

Unfortunately for Leo, Olivia Pope & Associates are way ahead of him, altering the lab test results, so (fortunately), Little Jerry’s man chowder remains a mystery.

Command: Command is the name of the unfortunate person at the head of B613, the government’s maybe-or-maybe-not defunct top-secret spy agency that seemingly got offed by a flick of Olivia’s switch last week. It apparently is a job that makes its holder extremely isolated and unhappy, but is coveted nonetheless. The position used to be held by Olivia’s father (from Charlie: “Command”) and is now held by Jake (Charlie: “Other Command”).

As Command, Jake is not only privy to all sorts of secret intel, but he apparently has access to super-secret feelings. Last week Olivia had to sleep with him to get the info to shut down B613, but Jake maintains he could tell there was something real between them. Olivia says she loves Fitz, so her feelings for Jake seem like a betrayal. Jake says that seems like a first step. We’ll see how this plays out, but it would be nice to see Scott Foley get the girl for once. Without dying (like he did on Grey’s Anatomy.)

Post-Command Papa Pope hasn’t forgotten how the game works either, as he plays a scary game of Russian Roulette with his wife’s lover that doesn’t end well for the guy. Still Rowan somehow manages to get shot by said wife (the most dangerous woman in the world) by the end of the episode, even with all his mad skills in:

Wet Work: Olivia Pope & Associates is not an office space you’d like to hang out at this week. Huck drags in the terrorist bomb expert/Marie boyfriend they’ve been searching for (turning Quinn on, ew), and although Huck and a drill could probably get the bomb info out of him in no time, Olivia protests (conveniently forgetting the times she’s let him off the leash before?). So in runs her dad with the one bullet and the six chambers. She protests afterward that “wet work doesn’t happen here” (referring to jobs that involve spillage of blood); Rowan actually apologizes, stunning her, but, hey, he’s been waiting to kill that guy for a long time. See also: “black site” (i.e., “You’re turning this office into a black site!”).

Defiance, Ohio: Defiance is pretty much where all these Scandal shenanigans began. Four years ago, right before the election, Mellie, Liv, Cyrus, and some nefarious friends rigged the ballot box in Ohio. Now, as Fitz falls to Sally in the polls, Fitz and Cyrus head back to Ohio (just like the Pretenders’ song!) for a rallying rally, disregarding Liv’s orders. Ironically, Fitz’s failure to win a clean election last time is causing him to put his own life in jeopardy to win this one.

But it won’t be in jeopardy. Despite some shoddy intel (gathered by Harrison, natch) that seems to point to the bomb being buried in Defiance (Oh! The symbolism, from a figurative bomb to a literal one), we learn at episode’s end that the bomb is actually planted under a church, where both Sally and Fitz are planning to give an election-winning eulogy. Jake informs Cyrus, who decides to save Fitz and let Sally, Leo, Andrew, and a great many number of innocents blow up. His unhinged reasoning is that if Fitz doesn’t get reelected, “Everything that’s happened will have been in vain” (including James’ death), leading him to contentedly stroll through the White House, pretending to listen to Fitz read a eulogy that he will never in fact deliver. Cyrus has become more and more monstrous over the course of this season (pimping put his own husband comes to mind), and this show is pretty lousy with murderers and nefarious types, but there’s no coming back from a move like this. Will it have repercussions for Cyrus? Or is he so far gone that it will barely make a mark on his deep, black soul? We’ll find out next week when all the bombs blow up, to see what remains in the rubble from this insane Scandal season. 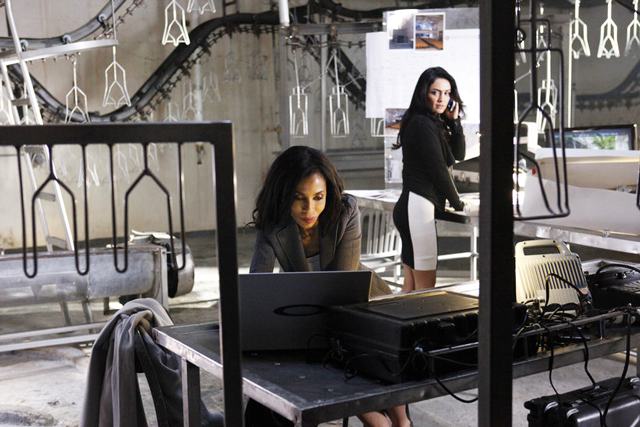