We’ve had a lot of fun this past mini-season on Scandal, with our support groups and employment guides and whatnot, because Scandal, with all its twists and turns, can be entertaining fun. But this time, no, this time was not fun. This time, Scandal went too far.

I honestly do wonder what goes through Scandal creator Shonda Rhimes’ head as she pens these dramatic hours and comes across a horrific turn of plot. I suspect she giggles and shakes her own head at herself initially, as in “Oh, I couldn’t do that!” Then she probably just wants to. Just to show that she can. She’s like the honey badger of plot. Honey badger don’t care.

Was letting the bomb go off too far? No, that was actually pretty gripping, with some hilarious timing (give or take all the injured people) of Fitz complaining that there better be a bomb in that church, dammit, just as it goes off. Then Leo Bergen, who I am liking more each week, smudges up Sally’s face and tells her to get in there and “Go be Jesus,” so she makes tourniquets and tends to the injured amidst the rubble. Now she’s going to win the election because apparently Americans want to elect Mother Teresa.

The bomb also showcases a nice duality in both Jake and Cyrus, as Jake plays the good guy for once, trying to get everyone out of the church, while Cyrus has a last-minute crisis of conscience about letting hundreds of people die just so that his president can get re-elected. But Sally survives, and Fitz’s presidency is in peril.

So sad Olivia turns to her dad, and Joe Morton really does an excellent job of playing someone who can be perfectly paternal and perfectly evil all in the same episode. He wants a quick way for Fitz to win the election the next day.

Killing Little Jerry is not clever, or fun, it’s just horrible. It’s so horrible that Tom sticks Jerry with a pin laced with a deadly meningitis virus so that Fitz will let Rowan go after Maya and reinstate B613. It’s so horrible that Olivia has to leave town afterward and Mellie and Fitz end the season crumpled on the presidential seal on the Oval Office carpet. What’s fun about that?

Yes, I realize that no actual, real people got hurt during this viewing of Scandal. But what are we supposed to do with these characters now? They are irrevocably, irretrievably broken.

Of course, there is an overarching theme in this finale, possibly this season, and it’s all about reinventing yourself. Olivia and Cyrus ponder in the hospital waiting room how they got to be such horrible people, now surrounded by the deaths of children and churchgoers, all in the name of the Fitzgerald Grant presidency. Huck left his original family and completely reinvented himself; although he tells Olivia that it’s the best thing that ever happened to his wife and son, he’s still ringing their doorbell at the end of the episode. Quinn is already living under an alias, and has changed from a victim into some kind of crazy sex-crazed assassin; we can only suspect that when Abby called out “My eyes! My eyes!” when catching Huck and Quinn getting busy over the bloodstains in the conference room, she was speaking for us all.

Sometimes the reinventions are for the good: Fitz’s version in his head of Mellie as a vindictive political climber is changed forever by Olivia’s revelation that Mellie was raped by Big Jerry, which is what caused her to pull away from Fitz in the first place. Olivia being Olivia, she had to reveal the one thing that was possibly going to lead her boyfriend back to his wife, but thank God the Grants have each other, now that their son is dead. Olivia being Olivia, she also feels guilty because she knows somehow her parents had a hand in it, as it turns out, both in their undeniably twisted love for their only daughter, trudging up the season’s recurring theme about family. Since Olivia at first blames Maya, she unfortunately lets her guard down with Papa Pope. Harrison, of all people, is the first to figure out: Maya Pope had no reason to kill Fitz’s son—there was absolutely no money in it for her—but Papa Pope got everything he wanted: daughter on a plane, Jake out of town, revenge against Fitz, his Command position back, and all. Harrison’s such a genius that he accuses this mastermind in a deserted office with no one else around but Rowan’s hired gun: Could this be the end of Harrison? Eh, good riddance.

Olivia and Jake’s attempt to reinvent themselves at the end of the episode is so ridiculous as to be almost completely futile. Is there any way in hell that Season Four will not involve Olivia getting drawn back into the drama again somehow, possibly over a terrorist threat against the White House involving her mother? No, there for sure is not, for then there would be no show. The Fitz and Mellie pair will be somewhat darker next season, certainly, which is not something anyone is really dying to see. And Rowan kept the most dangerous woman in the world, Maya, alive because he loves her? Even though she stabbed him and almost killed him?

No, what really needs a reinvention is this show, which started off as an engaging scandal of the week, fixed by Olivia Pope and Associates, then spiraled into some sort of presidential soap opera. Yes, some of these revelations and shockers were more effective than others, but these last eight episodes, as a viewer I’ve felt less like an audience and more like a puppet getting pulled around. All the while, Shonda Rhimes pulls her strings, designed to get the greatest rise from her audience. She’s offed any number of children in her Grey’s Anatomy and Private Practice storylines; she knows the effect. But here all she’s done is gutted the show, by removing the things we’re supposed to care about. The death toll was high this short half-season: Daniel Douglas, James and his counterparts, Clare, Dominic, Adnan, and the completely innocent Little Jerry. But ultimately, Scandal’s greatest loss was any remaining semblance of compassion. 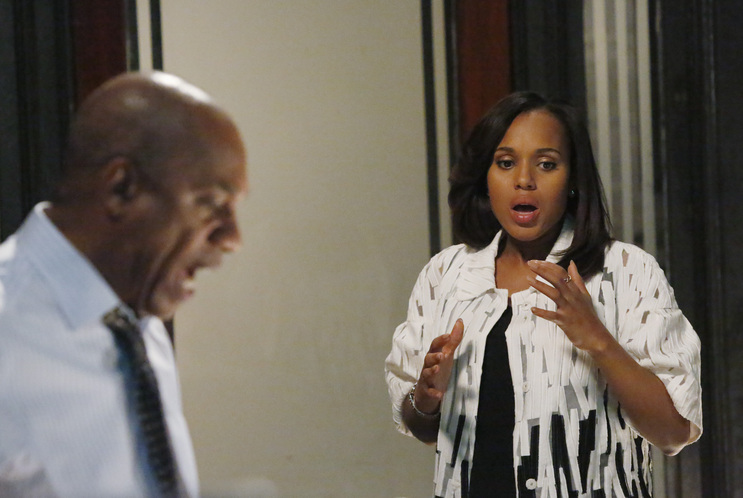