Welcome, everyone, thanks for coming. Did you all get coffee? And there’s a box over there if you want to chip in for the doughnuts. Thanks. Smoking outside only, please, and there are more folding chairs in the back.

OK, so let’s get started . . . I know we’re all pretty shaken up over what happened last night. I suppose we should have guessed that an episode called “The Fluffer” was going to be pretty unsettling. What’s that, Mrs. Benson? Oh, Mrs. Benson doesn’t know what a fluffer is, would someone like to explain it to her?

As we’ve been saying, back in Scandal’s early days (and who didn’t get a nostalgic flashback to that era with the Reston case, when this show was basically about OPA fixing a client-of-the-week, and there was usually a surprising twist worked in there somewhere?), Kerry Washington’s performance as Olivia Pope was a great reason to watch this show. Both compelling and formidable, she commanded your attention so that it was difficult to take your eyes off of her, and you’d want her to come in and fix your life as well. But last week we were dealt the crushing blow of realizing that she was little more than a maid with a bucket at the White House, cleaning up people’s messes. This week, she moves further down to prostitute, as Huck pimps Olivia out to Jake to get the information to take down B613. She doesn’t seem to have thought through this move very well, because the loss of B613 could lead to the death of the president, as Jake mentions in the episode’s concluding chokehold.

Even outside of the pimping and the choking, “The Fluffer” is filled with salacious details that do nothing more than compel to make the viewer take a shower after watching. First, former White House aide Jeannine Locke comes out with her new book, Taken for Granted: My Time as the Presidential Mistress, in which she calls the president a “satisfying, impressive man” and compares him to a baguette over a breadstick. I know, I’ll have a hard time getting that image out of my head as well.

Unfortunately, this is just the first in a string of unsavory moments in “The Fluffer,” like our weekly Olivia diatribe against Fitz, in which she explains the episode title: “What else do you need? What service can I render for you today? Am I here to stroke your ego? Am I your cheerleader? Am I here to wipe your tears? Am I your nanny? . . . Or maybe I’m here to make you feel hot and manly and ready so that you’re not jealous of your wife’s boyfriend. Is that it? Am I your fluffer today, Fitz, is that what I am?” If I wanted to watch screaming matches like this, I could go to my parents’ house at Thanksgiving, am I right?

Actually, this week’s awkward Pope family dinner between Liv and her parents more accurately resembles my painful holiday gatherings with relatives, with superficially polite conversation through bared teeth and over clutched steak knives. Momma Pope offs Harrison’s contact Clare, who was a goner as soon as she called Marie a “possible mentor,” then threateningly cautions her daughter to get into a safer line of work. In between she sleeps with some new guy and receives a bomb in a box. Apparently she and Adnan are working on a Fitz assassination plot, but does anyone get the motivation for this? Anyone? You in the back? Oh, you were just scratching.

Because a single showdown with a paramour just isn’t enough for one episode, Liv also has a strained conversation through a door with Jake, who tries to win her over with the swoon-worthy “I would never kill your friends.” That’s not even the only half-hearted promise Olivia receives this week, as her father promises to stay away from the president: “I won’t harm a hair on his head,” which someone as savvy as Olivia should notice that it leaves a loophole wide open for her dad to hire someone else to hurt Fitz. We’re also treated to clunky dialogue like “D and C ‘til the cows come home” and the “Mona Lisa of boom.”

When even Huck protests over the heinousness of the work done by Olivia Pope and her associates (aptly described by Andrew as “cutting people’s throats and calling it politics; appealing to the lowest, basest part of humanity; scraping the bottom of a person’s soul”), Liv points out, “This is the job.” But why is it the job? Why is she fighting so hard to re-elect a president that she doesn’t even seem to like anymore? Does anyone have any ideas? [Pause.] No, I don’t either. Abby’s “You don’t get to run. You’re a gladiator. Gladiators don’t run. They fight.” speech doesn’t even seem to make sense. Fight for what? Also, who had the over/under on the number of “gladiator” appearances this week?

The best part of the episode is Mellie, again. Doesn’t it seem like we always say that? Here she is the sole voice of reason as she addresses a group of wounded female veterans: “Seeing you women here makes me realize how small and petty those matters can be. Standing in the presence of such strength, grit and resilience, I am reminded of what is really important, and that is all of you, the very best of us.” After Olivia effectively scares Andrew away from Mellie, the First Lady awesomely follows up this speech by slapping Fitz right in the face, yelling, “You take everything from me!” When Cyrus tries to clear the room, she snarls at Fitz, in the best line delivery of the episode, “No . . . you just keep on being president.”

So why do we watch in the first place? Why do we come here every week? Does a show have to have likable characters to be worth viewing? I don’t think we all need nicely wrapped, feel-good programming (for that, we could turn to ABC Family or something), but it would be helpful if there was someone on Scandal that did not seem like such an awful person.

We’re not gladiators. We can run. But, with only two episodes left in this off-the-rails season, I guess we can wait it out to see if/when the bomb goes off. To see if Fitz survives. Or Olivia gets her soul back, or if her mother is brought to justice. But, knowing Shonda Rhimes like we do, there’s no way in hell this isn’t all ending in a huge cliffhanger at the end of the season anyway.

Bob? Can you bring the doughnuts next week? 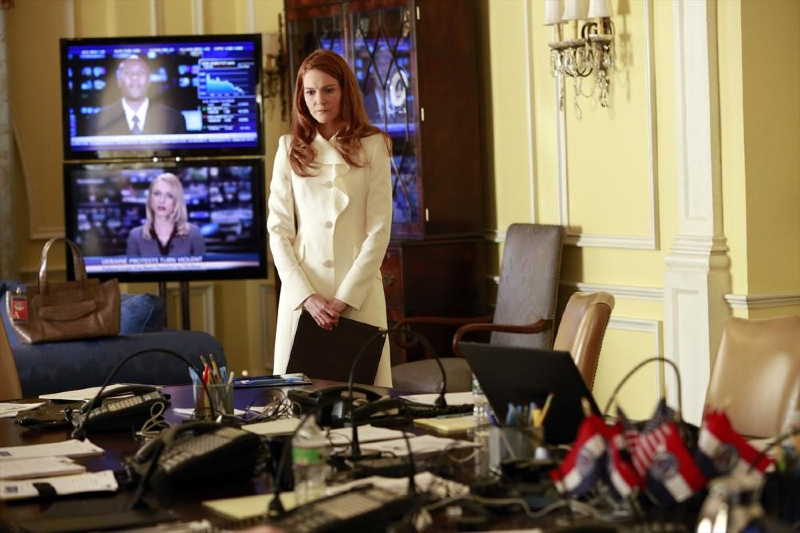