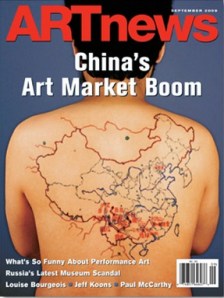 Milton Esterow, the owner of the 112-year-old art magazine ARTnews since 1972, has sold the publication to the Russian art market analyst and investment banker Sergey Skaterschikov. The deal was finalized earlier this morning. The magazine was bought by Mr. Skaterschikov, through his investment vehicle Skate Capital, for an undisclosed sum.

“It has been a privilege working at ARTnews — a marvelous, fascinating 41-year ride running one of the world’s most honored magazines,” Mr. Esterow wrote in an e-mail to The Observer. “I have had the chance to meet, and work with, the great and the good. I have met with gifted artists, scholars, curators, collectors, dealers and writers in many countries. I have also met forgers and frauds. As Noel Coward once said, ‘work is more fun than fun.’

“I have decided that it’s time for a new generation to take over ARTnews,” he continued. “I am delighted that Sergey Skaterschikov and Skate Capital will be leading ARTnews into the future and will be building both the print and digital arenas internationally.”

In a separate email, Mr. Skaterschikov also looked to the future.

“The art media market is poised for a massive change as print advertising budgets shrink, fashion and lifestyle media outlets cross over into art and major dailies around the world cannibalize art coverage from specialty publications,” he wrote. “Scary times. I love it and have a great strategy for ARTnews, stay tuned.”

Mr. Skaterschikov has enjoyed a higher profile in the art world of late. He is the founder of the art-investment report Skates and briefly owned the Viennafair contemporary art fair, a turnaround investment. He also participated in an attempted hostile takeover of the art start-up Artnet (Skates Capital is now an investor in Paddle8).