Spring has sprung — and so have the creepy critters all over Soho.

Two weeks after a mouse infestation forced the shutdown of Dominique Ansel Bakery on Spring Street (it has since bounced back with a triumphantly themed “Rocky” cronut), Blue Ribbon Sushi on Sullivan is having a cockroach crisis, the Observer has learned.

A male diner was having lunch at the maki and sashimi joint on Monday when a roach fell from the ceiling and landed on his table, followed by four others.

“These weren’t small cockroaches,” he told the Observer, poising his thumb and forefinger about an inch away from each other to approximate the size of the bug. “A person from the restaurant said, ‘Maybe it’s about to rain, this hasn’t happened before.’”

The pests also fell on other patron’s laps, literally. During the same lunch service, a cockroach crawled on the leg of a man at the next table. Fortunately, none of the gauche garnishes fell into the food, and the restaurant comped half the bill (we’re surprised it wasn’t completely free).

Eric Bromberg, co-owner of Blue Ribbon Restaurants, told the Observer that they have addressed the matter and apologize for the incident.

“Once we knew we had an issue, we scheduled our exterminator to come that day, as soon as possible, and we waged war. After many hours we found the source — located next door — and rectified the issue. The entire restaurant has been thoroughly searched and cleaned and we are moving ahead with service as usual.”

Guess we won’t be having extra crunch with that. 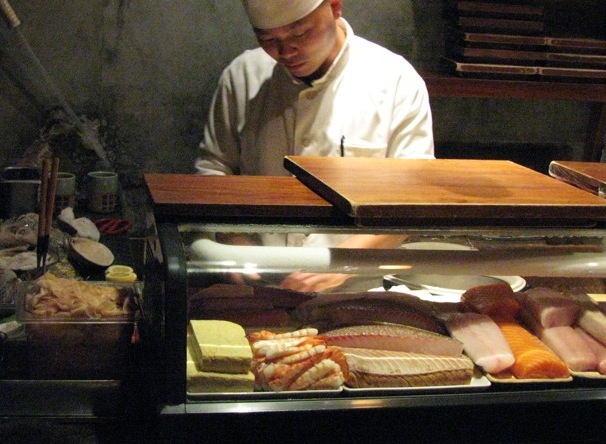