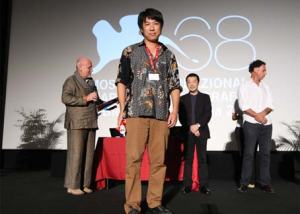 Charlie Lim has been tapped by Singapore to represent it at the 2015 Venice Biennale, with Shabbir Hussain Mustafa, of the National Gallery Singapore, serving as curator, according to The Straits Times. The city-state skipped the 2013 edition of the biennale, but has otherwise participated since 2001.

Mr. Lim is no strange to prestigious international expositions. It happens that he was a former sailor and represented Singapore in the 1996. A cofounder of the net art collective tsunamii.net, he has been involved, as an artist, with the Shanghai Biennial (2008), Manifesta 7 (2008) and Documenta 11 (2002).

Singapore’s FuturePerfect had this to say about the artist in 2012:

Charles Lim sees Singapore like no other artist. As a former professional sailor, his senses are keenly attuned to environments we rarely see, to forces that most of us would not even notice. This unique viewpoint marks a body of work that makes visible, with stunning clarity, a physical reality that lies hidden around us every day.