Mayor Bill de Blasio and his pick to be the city’s next film commissioner today threw down the gauntlet against cities like Los Angeles, Toronto and Vancouver, who have been fighting hard to dig into the city’s film and television industry.

“First I’ll say with apologies for my good friend, Eric Garcetti in L.A.: Sorry that we’re ever more attractive to the industry. We’re just going to keep doing that more and more and more and this is the way the world is going,” announced Mr. de Blasio, speaking at a press conference unveiling his new commissioner of the Mayor’s Office of Media and Entertainment, Cynthia López, at Steiner Studios in Brooklyn.

After touring the set of the Kevin Bacon show The Following, he and other electeds made clear that they intend to defend the turf the city has won in recent years.

“What we need to remember is that this a mobile industry. Our competitors–whether they are Los Angeles, Atlanta, Toronto, Vancouver or elsewhere–are always looking for advantages and always trying to find ways to steal production from us,” said Council Speaker Melissa Mark-Viverito. “Well, we’re not going to let them steal our shows or our jobs. We are here to say, very simply, that there’s no better place to film than New York City.”

“I just want to thank Melissa Mark-Viverito for throwing down the gauntlet for Vancouver and Toronto. That had my blood flowing there,” the mayor said in response. “We are the best and we know it.”

Los Angeles recently launched an effort to stop what it calls “runaway production,” as it and other cities across the country and the world explore new tax breaks and other efforts to lure the mufti-billion dollar film and television industry to their soil. The local industry currently generates upwards of $7 billion annually for the city and employs an estimated 130,000 people.

Mr. de Blasio went on to argue that the industry is a fundamental part of the city’s DNA and talked up efforts under his predecessor, Michael Bloomberg, including the building of the studio where he stood. But asked for specifics on what steps the city plans to take to remain competitive, the mayor was vague.

“Out strengths, to some extent, were always there, but maybe not as evident as needed to be or developed the way they needed to be or made available the way they needed to be. But on top of that, I just think history is supporting us … And we are all very conscious–the city government, the state government–we know this is one of the big pieces of our future,” he said. “I think the future’s with us, naturally. That being said … we have to earn it everyday. We’ve got to earn it everyday.”

“I really believe in my heart that we’ve been on the right path as a city and that we now need to maximize our advantage,” he added.

Mr. de Blasio also spent much of his time stressing the need to make sure that New Yorkers from across the city can take advantage of jobs in the industry. He said that his administration would focus on increasing communication with residents in neighborhoods who feel overburdened with film production, giving them more notice about planned shoots as well as doing a better job convincing them why the industry is important to the city.

“There’s more we can do at the neighborhood level to make production easier for these companies, while still respecting neighborhood concerns. I’m convinced we can do more and better on that front. I think in part that is showing neighborhood residents why this is so important to New York City and how it benefits all of us,” he said.

Ms. López, a documentary filmmaker tried to do her part, declaring that, “New York is open for business, whether you’re a $10,000 production or a $100 million production.”

That includes making sure that the Late Show stays put in NYC when Stephen Colbert takes over from David Letterman.

“We will do everything in our power to make sure that they stay,” she said. 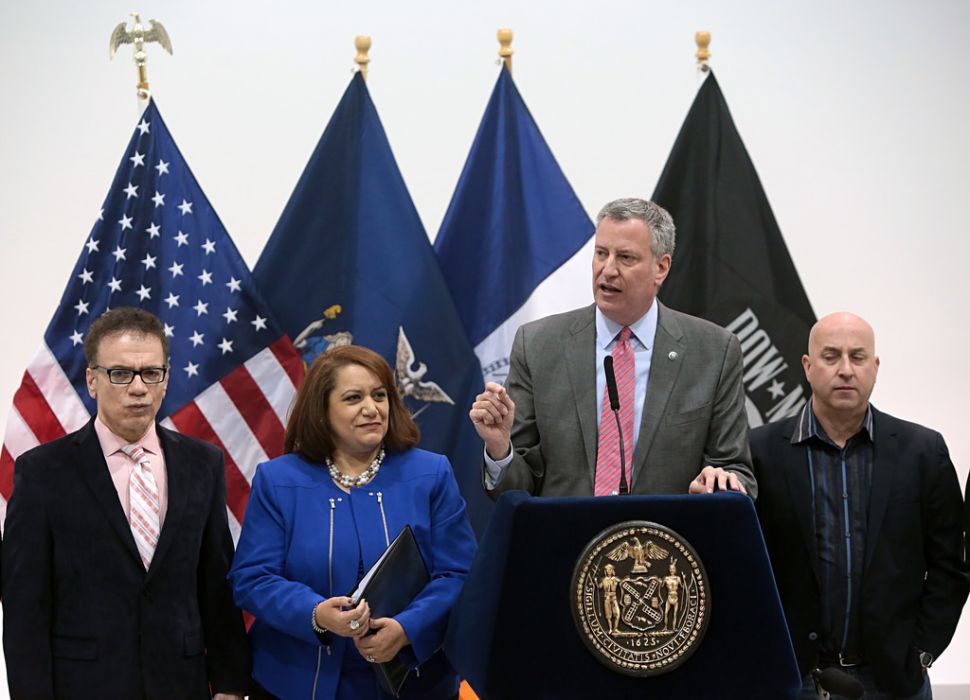