They’ve called a meeting set for this evening to sit down with the chairman to figure out a containment strategy for discarded incumbent Freeholder Jose Munoz.

The feds’ star witness against Roque in a computer hacking trial last year that ended with a jury acquitting the mayor, Munoz evidently didn’t get the memo that he’s supposed to be political roadkill.

And establishment sources fret that he’s personally taking chunks out of the organization at the local level with a very energized campaign.

Alert, Roque also craves payback for the job Munoz tried to do on him at that trial.

He’s also watching his back in advance of next year’s mayor’s election, when he is expected to pursure a second term in office.

If Munoz wins, sources say, his own campaign for mayor begins the next day, in what would amount to a grudge match between the two west New York pols.

Running off the line after getting dumped by the HCDO, Munoz is running a charged up re-election campaign, scaring the allies of Rodriguez and Roque, who want Prieto engaged.

“He’s a worker,” a party ally groaned, when asked about the Munoz campaign and the possibility that he could upset Rodriguez off-the-line.

Once the pariah of the party who landed in the mayor’s office in 2011 and proceeded to fire anyone who opposed him, Roque reborn is turning to the same organization he warred with for goodwill.

Attorney Donald Scarinci’s was the first head that rolled when Roque took over Town Hall and leaned on citywide allies to purge the town of older era cobwebs. The boyhood friend of U.S. Sen. Bob Menendez (D-NJ) was the School Board attorney.

Now, three years after getting forced out, sources say Scarinci’s the favorite to return –this time as the town attorney, in a full on Roque embrace of the same organization that once tried to destroy him.

Munoz promised to run if the HCDO kicked him off the line as punishment for failing to put away Roque, and he did – with a vengeance.

At one time, the Hudson Democratic Line meant certain political doom for a challenger, but Munoz has shown such ubiquity and visibility in an effort to retain his seat that he has the organization’s attention in advance of the June 3rd Primary.

“He’s doing a Steve Fulop,” a source told PolitickerNJ, referring to the mayor of Jersey City who last year bucked the organization when he wrenched the mayor’s seat away from incumbent Jerry Healy, who had the backing of the HCDO.

U.S. Rep. Albio Sires (D-8) is also heavily engaged in the effort to put down Munoz.

Sires wants her to win – in the worst way.

“They’re pulling Vinny in,” said a source. “Ultimately, it’s Albio’s candidate, and it comes down to Albio. If Caridad wins it will guarantee him another term. If he loses in his hometown, Albio’s a dead man walking.”

A Rodriguez loss not only plays havoc with Roque and Sires but splashes on Prieto, who just last year took over the HCDO, which is why the West New York mayor’s allies called for tonight’s meeting and want him to take organizational ownership.

Rodriguez is not as mobile and swift-footed on the doors, an insider close to the campaign worried.

The Rodriguez campaign will hit 10,000 households with mailers this coming Friday.

But “Munoz is a bull,” the source added. “He did a citywide mailer and door knocker. He’s built a coalition with Count Wiley [the West New York commissioner].”

The source speculated that Wiley’s support now for Munoz means Munoz will back Wiley for mayor next year, but other sources say Munoz won’t resist his own run for mayor.

Munoz also has alignment with the anti state Sen. Nick Sacco (D-32) crowd in North Bergen, including the anti-establishment challenger for freeholder, a disgruntled ex-Sacco driver and NB police officer.

UPDATE: A source later told PolitickerNJ that West New York players cancelled the meeting schuled tonight with Prieto, but expect to reschedule in the coming days. 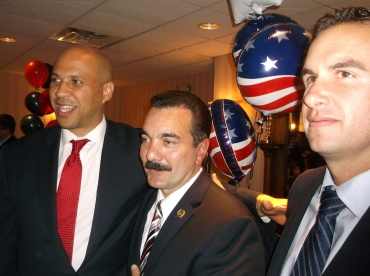