We’re going from least ham-fisted to most. In no means comprehensive, because wow. This show. Final season on June 22nd, everybody!

So esoteric it’s not actually offensive.

You know that Manson would have traded places with Maryann Forester in a second. Until she was speared by Sam shifting as a minotaur. Also the witches. And werewolf trucker gangs. Fairies. Shape-shifters (though they were more of a nudist colony). Just…all of it.

2. Vampires as gays
[youtube http://www.youtube.com/watch?v=vxINMuOgAu8&w=560&h=315]
The first couple times you caught the “God Hates Fangs” in the opening credits, it was almost subtle in its wink to the Jerry Falwells (or Reverend Newlins) of Bon Temps. But then came the “coming out of the coffin” puns and it was just a bridge too far.

1. Hepatitis D and V as metaphor for a “feared minority, homosexual” disease that’s “not AIDS.” (Thanks, Alan Ball.) [youtube http://www.youtube.com/watch?v=3uZYvaQzDkA] So we go into the final season of the show, which will hopefully end True Blood‘s legacy with everyone holding hands in a rousing rendition of Seasons of Love (Finale). 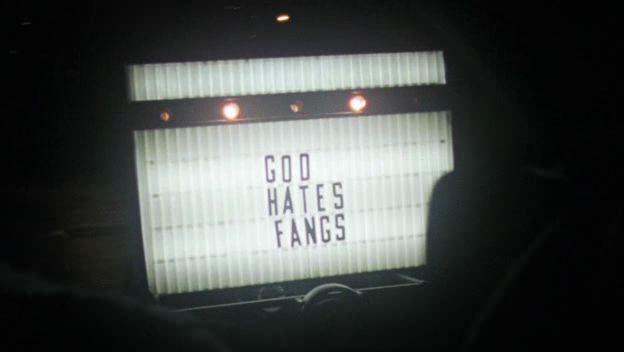