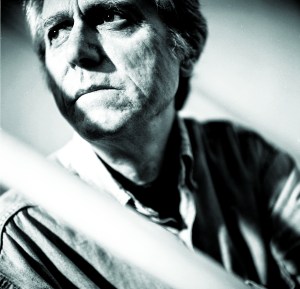 A chunk of Don DeLillo’s most recent novel, Point Omega (2010), is a lengthy description of watching Douglas Gordon’s video installation 24 Hour Psycho at the Museum of Modern Art. Falling Man (2007), Mr. DeLillo’s novel about 9/11, focuses on a performance artist who compulsively acts out the iconic Associated Press photograph of a man jumping to his death from the North Tower of the World Trade Center. Cosmopolis (2003) follows Eric Packer, an asset manager who wants to buy the Rothko Chapel, through various bacchanalia in the backseat of his limo—including a sexual encounter with his art adviser—driving through Manhattan.

Mr. DeLillo has long had a perverse fascination with the art world, and the art world may have finally caught up with him. This May, the Karma art bookstore and small press, located on Great Jones Street, will publish a previously unseen manuscript by the author, a one-act play commissioned in 2007 by the Steppenwolf Theater titled “The Word For Snow.”

The book will be published in association with Glenn Horowitz Bookseller, a rare books business based in the Hamptons and on the Upper East Side.

In a phone call, Mr. Horowitz said he’s done business with Mr. DeLillo for 10 years, recently helping him sell his papers to the University of Texas. Not long ago, he inquired if Mr. DeLillo might have anything in the archives worth publishing.

“Without any arm twisting, Don responded by offering me this text that had never been seen,” Mr. Horowitz said. “In typical DeLillo fashion, he probably also said it didn’t deserve to see the light of day but that I’m welcome to do anything with it.”

(Mr. DeLillo, who once carried business cards that read “I don’t want to talk about it” to dissuade would-be interviewers, declined to comment through his agent, Lois Wallace. When told a few details about the project, among them Karma’s location, Ms. Wallace said, “No, I don’t know anything about it. He did write a book titled Great Jones Street, though.”)

The book will pair the play with Richard Prince photographs, which is part of the reason Mr. Horowitz reached out to Karma and its owner, Brendan Dugan, whom Mr. Horowitz came to know through their mutual Hamptons outposts.

“He thought it would be an interesting fit for us to contemporize it a little,” Mr. Dugan said. Karma has done several books with Mr. Prince, and Messrs. DeLillo and Prince are both fans of each other’s work.

The play has three characters, the Pilgrim, the Scholar and the Interpreter, though no stage directions or setting even as sparse as “A Country Road. A Tree. Evening.” The Pilgrim seeks the Scholar for advice on what to do in a world that has recently come to an end—for reasons not explained fully, though the Y2K bug is hinted at. “I miss my personal trainer,” the Pilgrim says at one point. “I miss faces in the street.”

Everyone speaks English, which raises the question of the Interpreter’s role, though more curious is how he seems to be able to interpret things the Scholar has not yet said. It’s fair to say that at points things become fairly DeLillo-y:

Interpreter: He is saying skim milk.

Scholar: We are seeping inward.

Interpreter: This is what he is saying.

Scholar: We are narrowing the venues.

Pilgrim: But isn’t there a danger of making things too narrow, reducing people to faceless multitudes?

The photos by the equally interview-averse Mr. Prince come from his “Upstate” series, taken near his home in Rensselaerville. They include a half-finished tree house, a sad basketball hoop near a trailer and tire swing.

Which would seem to fit with the text. (Spoiler alert! By the end, they’re all speaking in tongues.) The book will be published in an edition of just 625, 100 of them clothbound and 25 in traycase. The regular edition will retail for $35, and the special edition will go for $300 to $500. Though the play was the subject of a staged reading at the Steppenwolf in October 2007, “The Word for Snow” has never been published in book form. The play is obscure enough that, in early conversations, Messrs. Dugan and Horowitz said it was their understanding that it was written in the 1970s but, after double-checking that with Mr. DeLillo, clarified its Steppenwolf origins. It is the first of Mr. DeLillo’s two dozen or so works to not appear from a mainstream publisher.

Best known for his novels, Mr. DeLillo has written several other plays, among them Love Lies Bleeding (2006), about the family of an artist on life support, and “The Rapture of the Athlete Assumed into Heaven” (1990), an interview with a tennis player just after a victorious match. A screenplay of his was turned into a 2005 movie, Game 6, starring Michael Keaton.