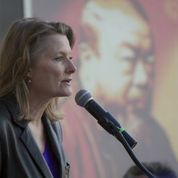 Egan at the rally.

“It’s an honor,” said a husky-voiced brunette with a purple scarf coiled around her neck, “to be a part of Ai Weiwei’s world.” She handed over a button stamped with the words, “Free Ai Weiwei” and an AW Asia business card that smelled vaguely of a spicy plant from the genus Pogostemon. She was handing out buttons to a crowd of about 200 protestors gathered on the steps of the Brooklyn Public Library one evening last week. They had collected at the behest of the Pen American Center and other friends of Mr. Ai, the Chinese artist and dissident whose upcoming exhibition, “According to What?,” will open at the Brooklyn Museum April 18. The artist remains under virtual country-arrest back in China. The government has been holding his passport for 36 months.

A battery of PEN writers, including novelists Jennifer Egan and Chang-Rae Lee, bundled up against the chill of the early spring night and read from the works of other persecuted Chinese artists. More than 40 writers, artists and intellectuals on PEN’s case list are undergoing similar strife in China.

“Fifteen years ago, some of you may remember, the right to freedom of expression was challenged by Mayor Rudy Guiliani, who wanted to evict the [Brooklyn] Museum and cut off its funding because he was offended by some art that he hadn’t seen and didn’t understand.” said Jacob Weisburg, the chairman of Slate and a board member of PEN. He was referring to the ex-mayor’s threat of withdrawing a $7 million grant from the museum in 1999 during its “Sensation” exhibition, which Mr. Giuliani called “sick stuff.” “Today,” Mr. Weisburg continued, “we’re here in response to a more distant but more fundamentally serious threat to free expression.”

Also in attendance was Alison Klayman, Mr. Ai’s documentarian. She began collaborating with the artist six years ago while living in Beijing, resulting in the acclaimed documentary Ai Weiwei: Never Sorry, a breakout hit at Sundance in 2012. She followed him over the course of three years in China, cataloging the artist as he made art, literally and figuratively flipping the bird to the Chinese authorities along the way. “The last time I saw him was in November,” a jean-jacketed Ms. Klayman remembered. “He’s so excited about the reach [of the documentary]… He’s like, ‘Millions of people have seen it.’ I think he meets people and also hears from people that are just getting to know him.” Mr. Ai’s popularity in the U.S. swelled as a result.

A blonde woman walked by holding a sign bearing the message “All Writers Matter.” Some protestors chained their own wrists together with plastic handcuffs before parading to the museum to watch a pre-taped video message from Mr. Ai. Jennifer Egan, waiting patiently for the crowd to filter out, told us she’s working on a new book but that she can’t talk about it. “I never really know what it is until I’m done,” she laughed. “And turns out it’s really hard to write a good book.”

Hard work, yes, but effort that achieves more than one end. “Freedom of Expression is to encourage every individual to question authority and to become more creative,” Mr. Ai said as his taped message projected onto the museum’s façade. “It will never come as a gift but rather through our artworks.”