This video of twin four-year-olds Maddie and Zoe Mendez singing “Let it Go” from Frozen is clearly the winner of everything and the end. It already has over 11 million views on YouTube, which means that Idina Menzel can pack it up and retire, as Disney can obviously just put these two adorable, screeching moppets on the face of all those unavailable Elsa dolls for the live-action sequel.

But is this video supposed to be funny? And if so, who are we laughing at?

Clearly, there is something a little bit off about this operation. The fact that the microphone set-up seems a little more high-tech than you’d usually give to an average baby, for starters. Then there’s the description of the video, which reads like a breathless press release from the society for stage fathers:

This video was not made to show off my daughters’ singing skills….in the future, I’ll be sure to get them some voice lessons to further hone their skills 🙂
This was made to show you what it looks like when two 4 year olds just GO FOR IT!!! Pure, raw, heartfelt and completely innocent!
No thanks to me (their father) they have had a camera in front of their faces since birth. The good thing about this is that we have TONS of awesome home videos…but also….they almost don’t even realize a camera is on them. They are completely themselves. I’m guessing that is why this video…meant for friends and family on Facebook has brought so much joy to people from all over the country.

Ha. I think this needs to be addressed in a list form.

2) No thanks to you, dad? Then who should we thank for these kids having a camera stuck in their face “since birth.” Mommy? That seems a little like you are passing the buck. “Don’t blame me, I just upload them!”

3) These children probably realize that there is a camera on them…what they don’t realize is the implications of what the camera can do. This is a perfect lesson in why kids shouldn’t be on the Internet unless they are old enough to give their consent. (I mean, not technically, but in theory.) How emotionally damaging will it be to grow up seeing the pitchfork mob mentality you induced in a YouTube comment thread? At least make the video private if you want to share it with your friends, hot damn.

4) As ABC News pointed out, Maddie and Zoe’s dad is an L.A. filmmaker. Far be it from me to question the decision to pre-pay for these kids’ therapy with ad impressions, but it’s also how people like Lindsay Lohan are created. Why even bother with the Mickey Mouse Club when you can just start your children on the long road to too-early fame on the Internet?

Verdict: This video made me laugh-cry, but then I felt bad about it, because I wasn’t sure I was laughing for the right reasons. I remain, as ever, *ambivalent emoticon.* 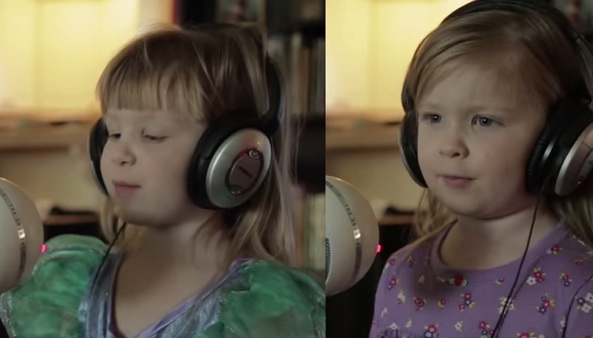