Breakfast in this society being, at best, an utter bore, and no aspect of breakfast being at all relevant to those who care about eating at restaurants, there remains to responsible, civic-minded, thrill-seeking breakfast lovers only to overthrow the tables, eliminate the menu system, institute complete domination and destroy the restaurants of New York.

I’m drunk and depressed, and it’s another bullshit night in suck city. (N.B.: Love that book, although Another Ether is even better.) New York City, a sleepless universe of 8 million souls, each with gaping maws and boundless appetite: I’ve had another (yet another!) tremendous, adventurous dinner with ample perfect rye Manhattans and could wax poetic about the care with which chef whatever whatevered and added a touch of fill-in-the-blank taste of his childhood plus ethnicity. I could dribble drabble my sand-castle words to wobbly five-star spires and use the word “unctuous” a few times just to be a troll. I could rave unto the joy fantastic about superannuated steak and smoky potato puree. Would that I could. I can’t.

It’s around midnight, and in a few hours time, I’ll rise again, be hungry again, desirous again for the adventures of last night’s dinner, when Los Angeles-raised Japanese chef Brandon Kida at Clement served painstakingly cured fluke afloat in a citrus dashi, under an Ikea ball pit’s worth of roe in a criminally empty dining room on the second floor of the Peninsula Hotel.

But when the sun rises, it’ll rise on a city that has no truly great breakfast restaurants. None that I have eaten at, none that I have heard of, none, zippo, not at all. No sir, absolutely not, sorry, but no. Not sorry really—just no. See, I read poetry in The New Yorker too, and smart as I am, I have not been able to ferret out any great breakfasts. The fact is, New York is a terrible breakfast city.

Even the restaurants to which one instinctively replies, “Oh, they have a great breakfast” (historically Balthazar, truthfully Maialino, sometimes Lafayette, mostly for the scenery), don’t have anything on their breakfast menu that isn’t a well-trod classic, tastefully updated and prepared with competence. It’s all fucking eggs, pancakes, waffles and granola.

Even at Sant Ambroeus, which has a famous breakfast and just opened in Soho, and which I was excited to visit, it’s just eggs and bullshit pancakes. Don’t get me wrong, its uovo al tegamino con pancetta ($15) is as close to being worth $15 as eggs sunny side up with bacon and potatoes can possibly be, but since when have eggs, pancakes, waffles or granola ever made anything great? An omelet can be great but only as great as Leni Riefenstahl was a filmmaker. (“Well, great, but it’s a fucking omelet, Nazi.”)

I do understand that no chef would waste their time on breakfast in its current form, limited to the same staid stable of dishes and ingredients. But isn’t that a failure of imagination, to not conceive of breakfast as an appropriate time for some derring-do?

In general, we start life liberal and end up conservative old pricks. Why do we reverse that trend when it comes to eating? Are we too timid in the morning to explore? Well, phooey on us.

I don’t know exactly what I’m looking for (uni in the morning, dashi at night, maybe?) but it’s not for the critic to create. I only know there are three meals per day, and we as a city of eaters are woefully failing one of them. 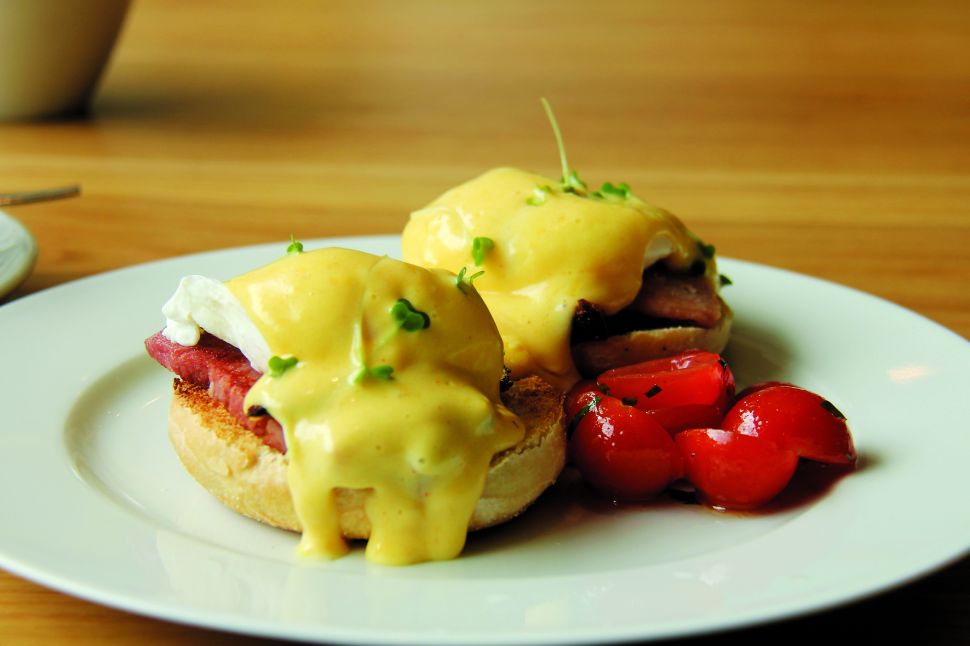