Martin Zelnik, a former member of the Rent Guidelines Board, recently weighed in on micro-units in Crain‘s, proclaiming them a good idea if done right. And while Mr. Zelnik follows up with ideas of what would constitute doing them “right”—integrating the units and their residents into the fabric of the city, lest they turn into a “gentrified urban slum” (à la the rest of Murrary Hill?)—and we should explore how best to continue developing such units, fretting over micro-units seems rather pointless given that tiny apartments already exist all over the city. And will continue to exist whether the city sanctions them or not.

And we’re not just talking about the city’s first designated micro-unit development, which, in fact, secured a construction loan yesterday—but places like this 90-square-foot unit on the Upper West Side. Though Felice Cohen, the occupant of that comically-tiny space, has since moved to a 500-square-foot pad (her landlord tried to double her rent), ironically, her new apartment is scarcely larger than one of the Bloomerbergian micro-units, which will measure between 250 and 375 square feet.

Nor is Ms. Cohen so rare. The Tiny Life has also documented New Yorkers who live in apartments that are significantly smaller than micro-units. And a  Harlem landlord recently tried to rent studios ranging in size from 100 to 250 square feet for $1,275 and up, according to the Daily News. Which, from the photos, at least, seem to be not nearly so well set-up as the city’s “Mike-ro” units, which architecture firms vied to design. (The Harlem building was attempting to convert from an SRO, though the city requires SRO rooms to be at least 150 square feet.)

Speaking of SROs, it’s worth noting that single-room occupancies, whose rooms are often far smaller than the proposed micro-units, having no kitchens and often no baths, were once a big component of the city’s affordable housing stock, though they have been fading away of late.

There are also countless apartments divvied up to cram two, three or four more people inside than they were designed for—the widespread use of party walls, the thin walls that partition off chunks of the living room, are so popular with recent college grads that essentially all luxury rental buildings have policies on them.

As Mr. Zelnik himself points out, New Yorkers are already living in micro-units.

“There is good reason for not permitting legal dwelling units as small as 200-300 square feet. Many 400-square-foot studio apartment units (a creation of the late ’50s and ’60s), while in high demand, are often occupied by two residents, and sometimes three,” Mr. Zelnik writes. “Does it make sense to encourage NYC developers to construct these units, only to increase occupancy or density beyond what might be environmentally and psychologically healthy? Beware the rat in the cage syndrome!”

Certainly, micro-units may not be ideal for families, and there have been serious questions about whether or not they’re affordable enough. But for all the hand-wringing—the Atlantic’s reporting in December, for example, that micro-apartments “definitely can be unhealthy for older people, say in their 30s and 40s, who face different stress factors that can make tight living conditions a problem”—there’s no use in pretending that the experiments in extremely small living spaces are not already being tried in neighborhoods across the city.

We should continue to discuss how best to introduce more micro-units, and particularly how to actually make them affordable to a broad swath of New Yorkers. But New York’s housing crisis is such that the city can either change its zoning code and policies in response to the city’s need or accept the often far-less-felicitous solutions that arise from the confluences of that need and far-from-benign market forces. 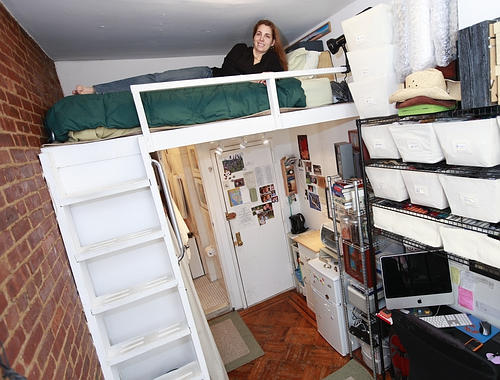