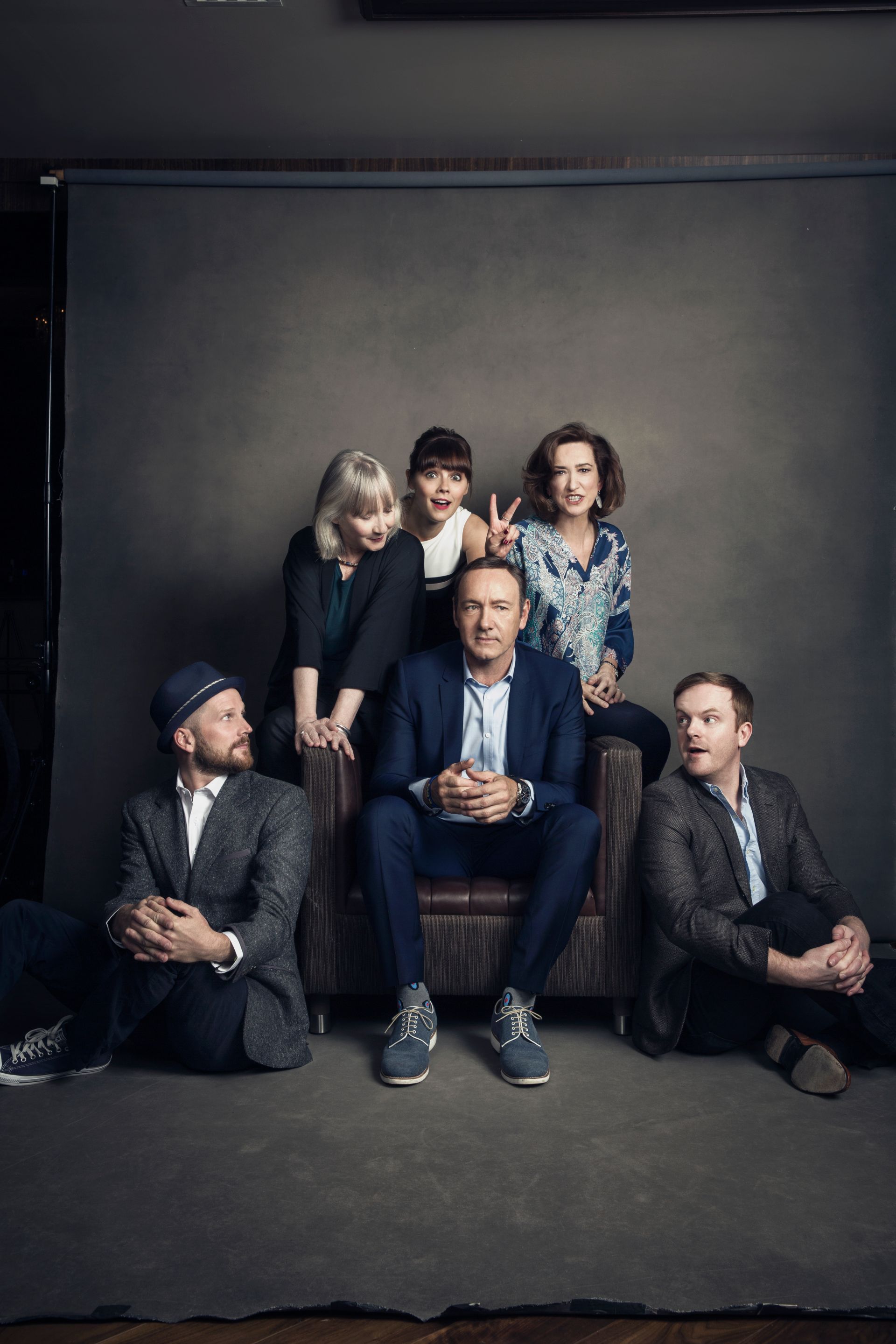 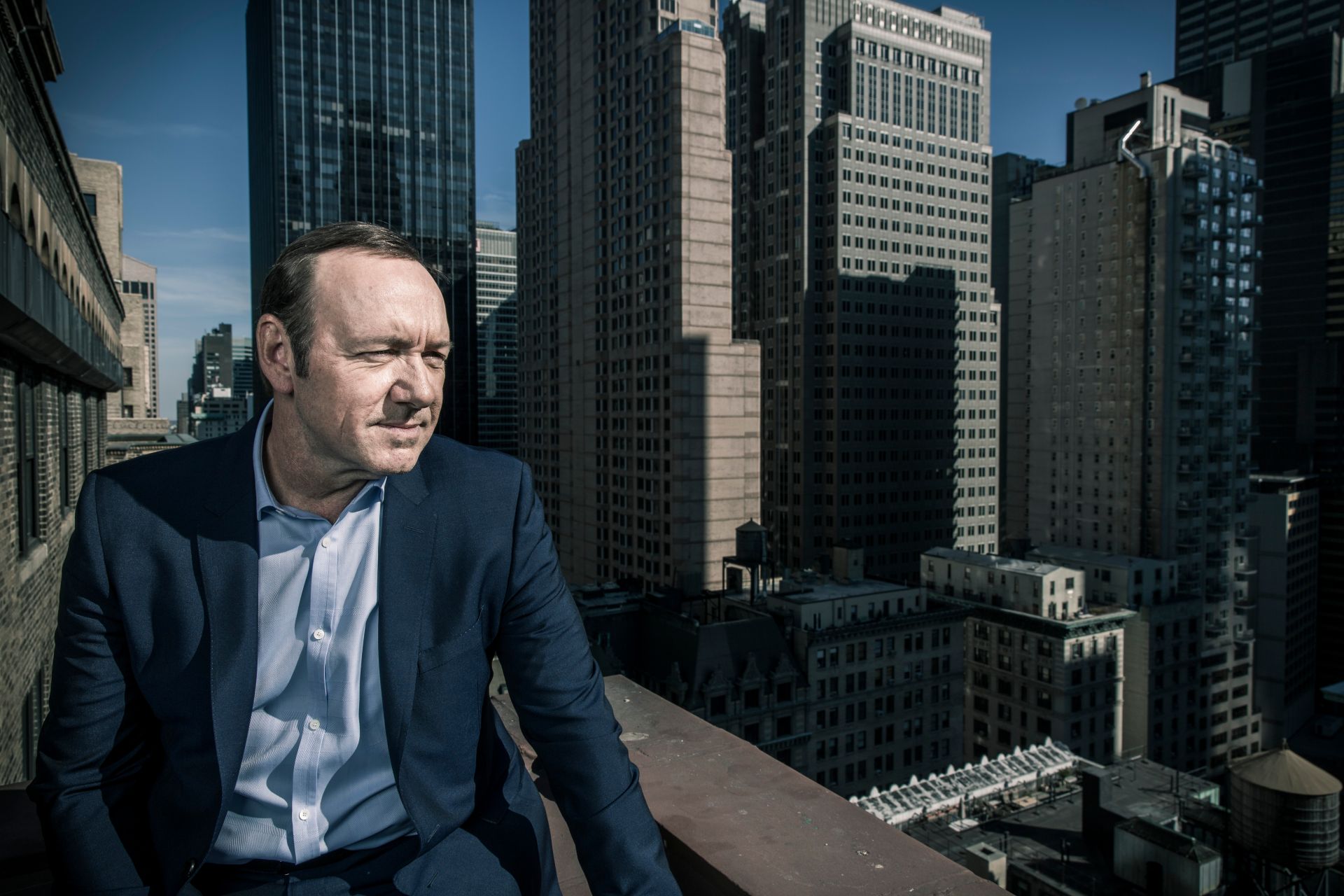 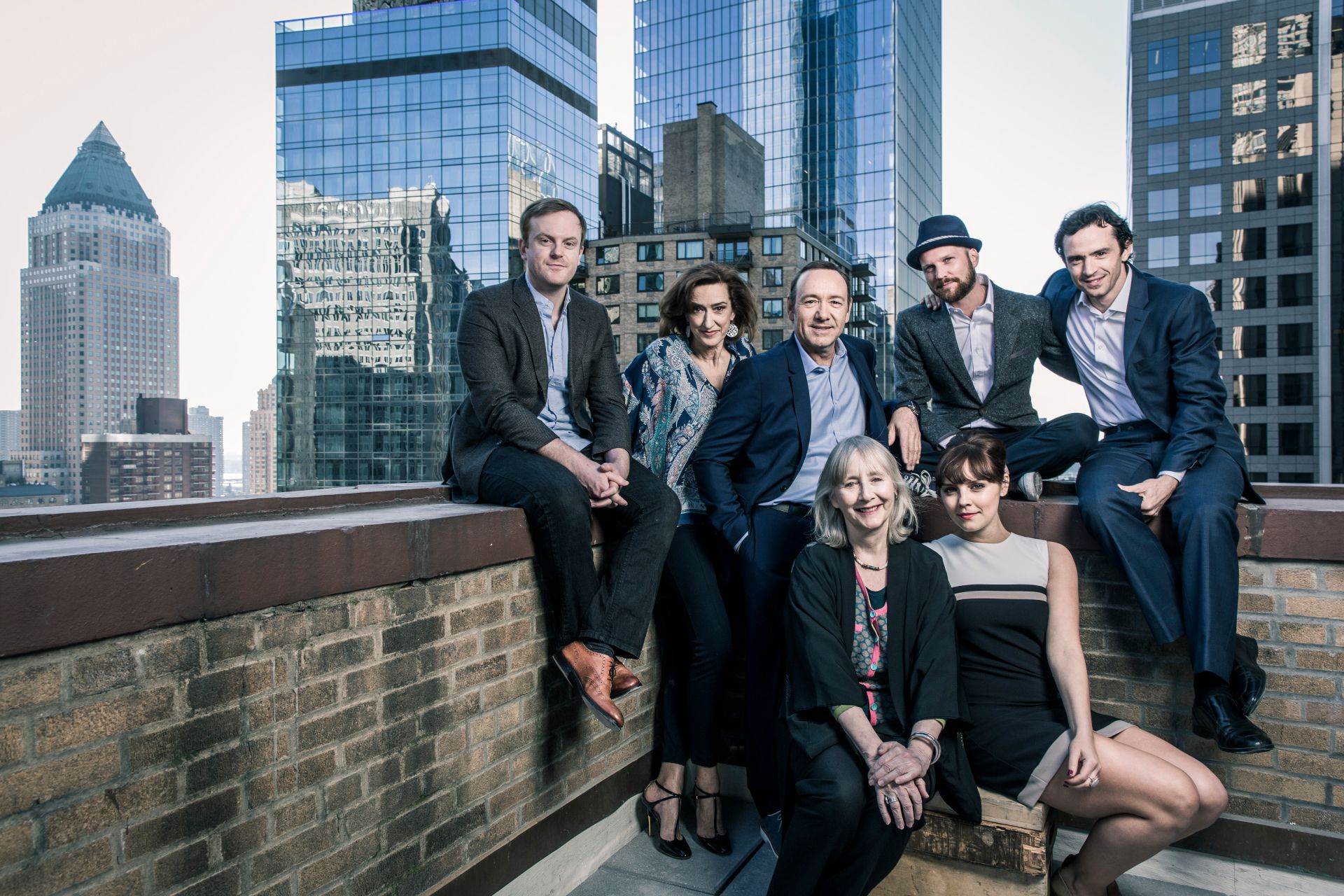 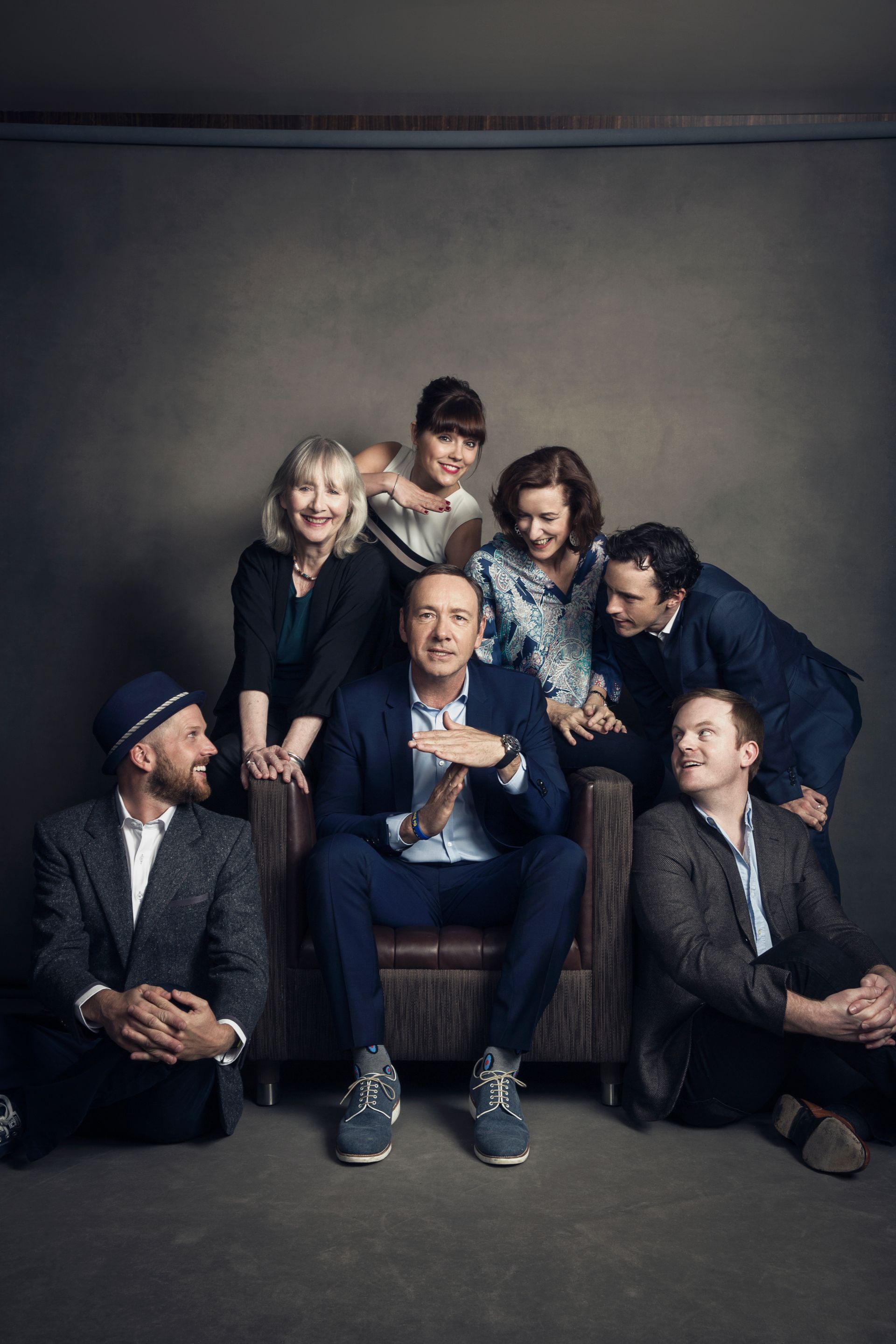 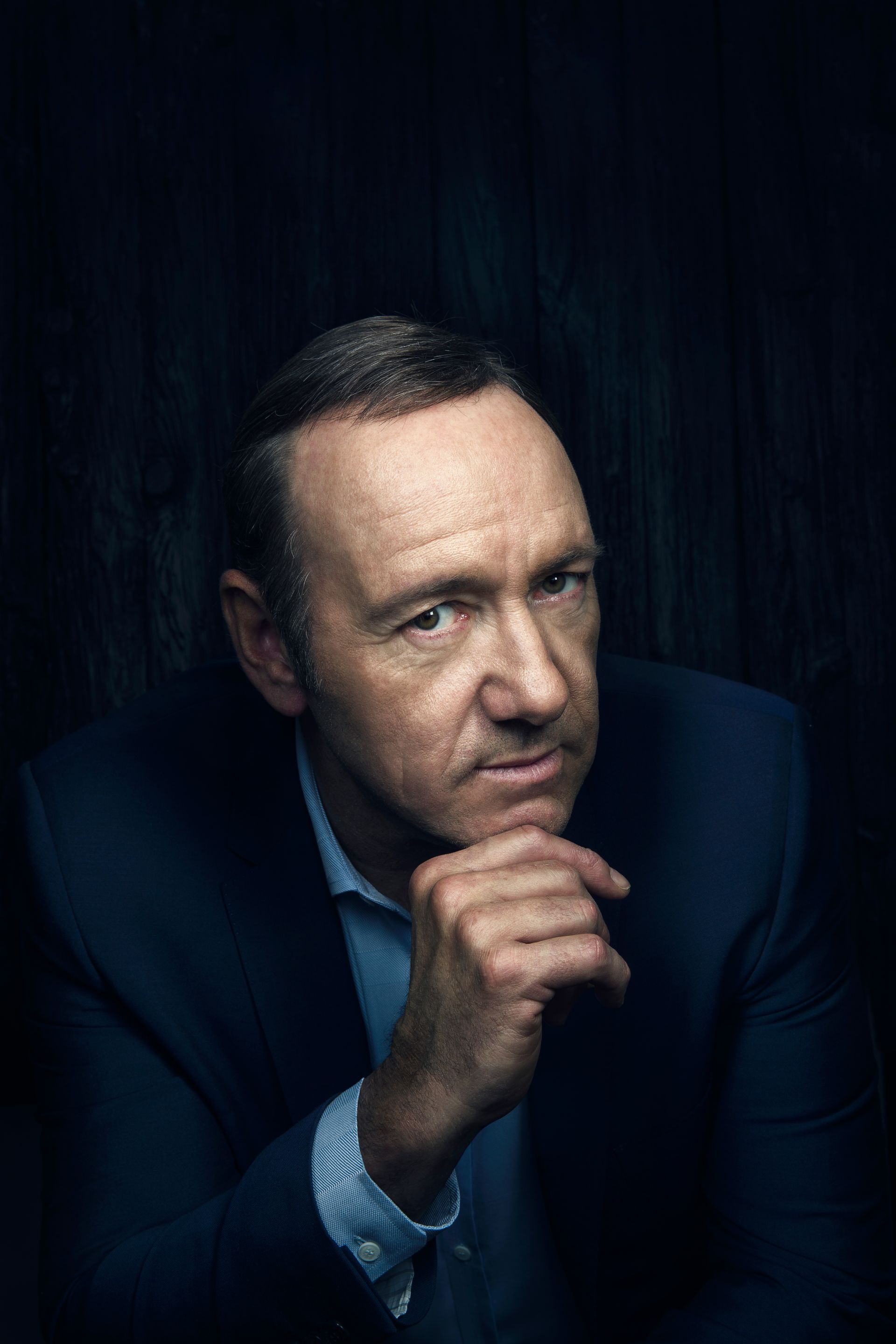 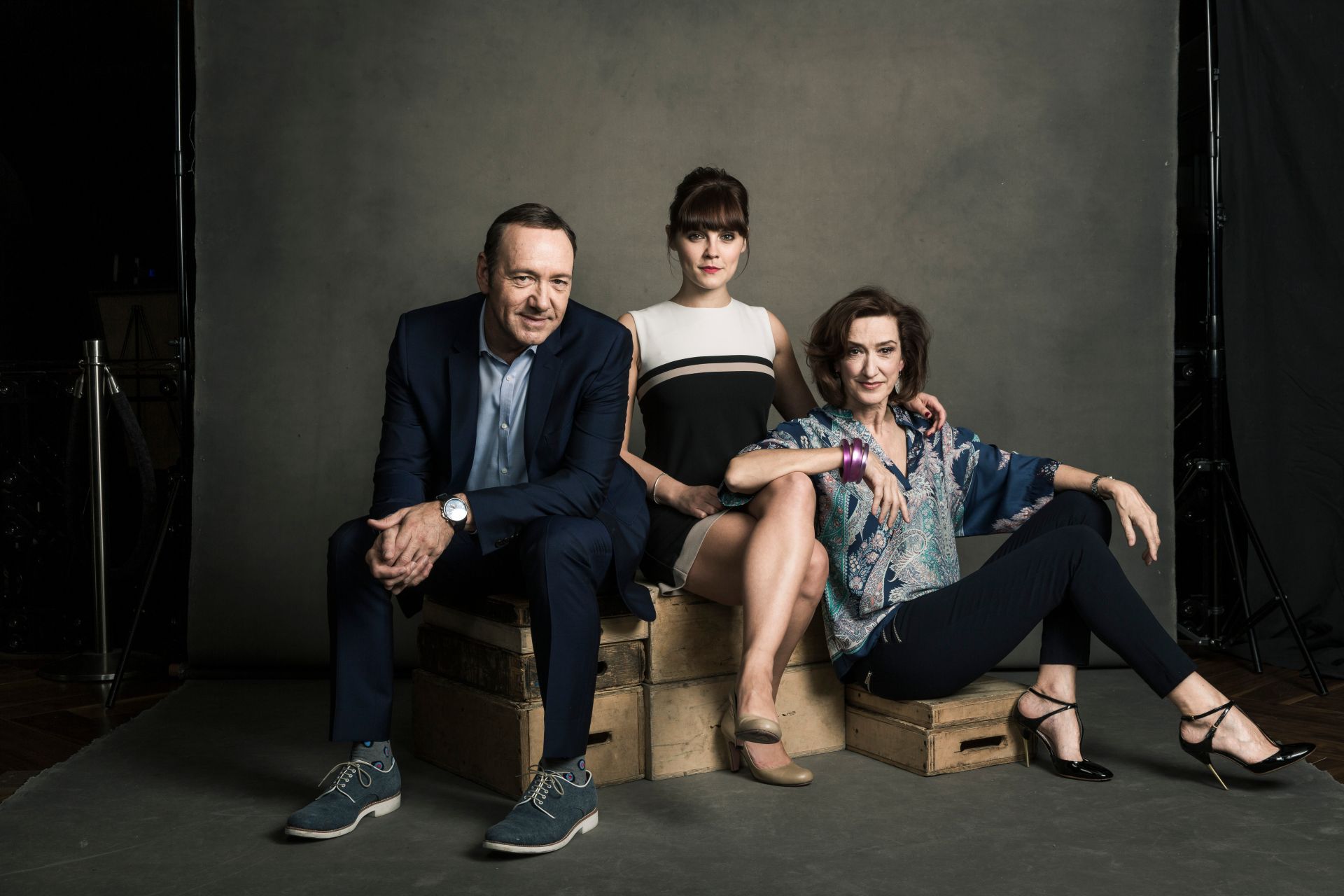 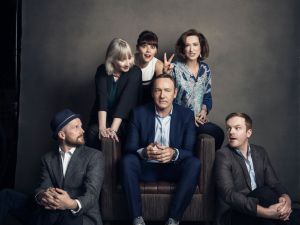 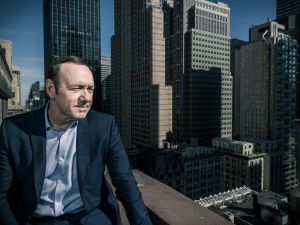 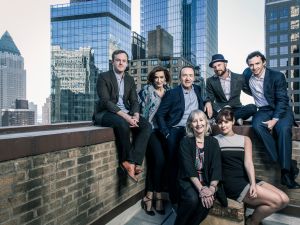 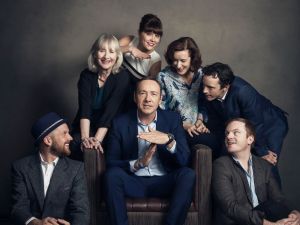 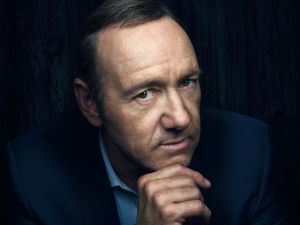 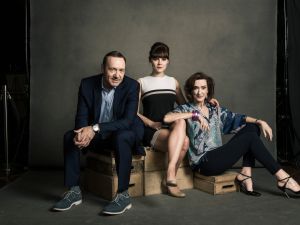 Last month on a warm night at a Park Avenue gala for the Museum of the Moving Image, President Frank Underwood took the stage alongside a rogue’s gallery of famously lovable creeps, from Denis Leary and Samuel L. Jackson to Michael Bloomberg.

Well, maybe not Mr. Underwood himself, but his proxy.

“I didn’t prepare a fucking thing,” said 54-year-old Kevin Spacey, the evening’s honoree. “I’ve been taking notes and I have them with me now, so you’re fucked.”

Mr. Spacey then embarked on a 20-minute monologue filled with his well-known impressions (though Kim Cattrall was a new one), a tearful tribute to his mentor, Jack Lemmon, and more f-bombs than the entirety of Glengarry Glen Ross.

“I really did wing it,” Mr. Spacey admitted two weeks later, sitting in a room at the Westhouse Hotel and sipping a Coke. “This kind of thing has never happened to me before, so I thought, ‘I don’t know how one goes about it.’”

He never had to write a thank you speech?

“I’ve been honored before, but not like that. It felt genuine. You know, sometimes you go to those things and it’s very…” Here, Mr. Spacey, turned out in a crisp blue suit with brown loafers and speckled socks, shook his head and gave a dramatic eye roll.

You’d think by now he’d be used to the accolades, but Mr. Spacey, who next year will finish a decade-long tenure as artistic director of the Old Vic in London, still appears slightly press-shy. In town to promote the documentary Now: In the Wings on a World Stage, about the ten-month caravan production of Richard III he starred in two years ago, the actor carries a sense of beleaguered wariness when talking about himself. Asked why he has begun appearing on the covers of American publications (recently both those of the Observer and The Hollywood Reporter) for the first time in nearly a decade, he claims coincidence.

“It’s not part of any strategy,” he said. “It’s literally my publicist calls me and says ‘Hey, there’s an opportunity to do something for Now.’ I believe in it, and I’m happy to be doing it.”

Perhaps, but anyone with a Netflix account will have noticed the Kevin Spacey sabbatical is over. Since moving to London in 2003, the actor had refused any role threatening to keep him from the Old Vic longer than eight weeks. During this time he appeared in films like Margin Call and Superman Returns, but the roles were brief and his time on junkets even briefer, bringing to mind his jubilant quote in Playboy about the movie Se7en, in which he appeared uncredited. (“I was in a movie that made more than $400 million worldwide and I didn’t have to do a single interview.”)

House of Cards, which Mr. Spacey not only stars in but executive produces, would seem to herald the actor’s triumphant stateside return. And what better opening act than the hottest show on TV?

Viewed differently, however, and in the context of Mr. Spacey’s overall career, House of Cards isn’t really a beginning but more like a middle, a halfway point in an evolving sequence of events all connected in some way with Shakespeare’s quirkiest tyrant.

In Now, which premiered at the Tribeca Film Festival earlier this month, we see Mr. Spacey play his Richard on a variety of stages, from the Epidaurus in Greece and the Doha Film Institute in Dhaka, Bangladesh to the Brooklyn Academy of Music. The productions all predate Mr. Spacey’s involvement in House of Cards, and all feature the hunchback king being played with the same sardonic transgressiveness as Frank Underwood. “Kevin’s performance in Richard III was revelatory,” Beau Willimon, creator and showrunner of House of Cards, wrote in an email. “He found the humor and humanity in this otherwise unredeemable monster. It seared itself in my memory and greatly influenced the writing of House of Cards, challenging me find a three-dimensionality for Francis Underwood that prevents him from being a mere sociopath.”

Going back even further, you can spot another link between Spacey and the Duke of York: He appears as Buckingham in the other documentary about the play, Al Pacino’s Looking for Richard, though Mr. Spacey dismisses any comparison:

Mr. Pacino did come to London to see Mr. Spacey perform the role, and afterward took his Glengarry Glen Ross co-star out to dinner. Slipping into one of his famous Pacino impressions (he does several, Mr. Leary confided at the gala), Mr. Spacey roars, “Oh, you graduated, Lord Buckingham!”

For an actor with a bent toward evildoers, from Keyser Soze to Lex Luthor, Mr. Spacey seems most at ease as a softy. The first 10 minutes of our conversation are about Boston, a mastiff-shepherd mix he adopted from a puppy truck outside Boston Medical Hospital during a visit after the marathon bombings.

“Before we went in to see the victims, an administrator asked, ‘Do you want to see the truck full of puppies?’” Mr. Spacey recalled, his face lighting up. “And I was like ‘A) Why is there a truck full of puppies, and B) Yes!’”
“There were loads of beautiful puppies,” he continued, “but one of them—this dog grabbed me around my neck and started licking my face like it had honey all over it. And I was done. I have a letter that says I will go insane unless they let a dog with me on a plane.”

It might not be an especially salient personality trait—Stop the presses! An actor who loves puppies!—except that it illuminates how Mr. Spacey sees himself: namely, as the type of person who, flush with success, “sends the elevator back down.” (This quote, from Spacey’s mentor Jack Lemmon, is the motto of his production company, Trigger Street.) A famously private man, the actor has a certain canniness when it comes to surrounding himself with talent: notably former assistants Dana Brunetti, now the head of Trigger Street (The Social Network, Captain Phillips), and Jeremy Whelehan, the director of NOW. Mr. Whelehan had worked with Mr. Spacey on his biopic of Bobby Darin, Beyond the Sea, and was brought on at Mr. Spacey’s behest to help direct plays at the Old Vic. Mr. Spacey also executive produced Now.

“I’m still pinching myself,” said Mr. Whelehan. “To have one of the greatest living actors in my first feature-length film, one of the best living directors [Sam Mendes], and the best writer who ever lived … is quite something.” Not to mention the fact that Mr. Spacey, in addition to financing the film, is the distributor as well, releasing the film for a limited theatrical run while making it available on KevinSpacey.com. Such moves have paid off so far: Thanks to the work of Mr. Brunetti at Trigger Street and House of Cards, Mr. Spacey is now seen as a force in the TV industry. He has the clout to admonish network executives—as he did while delivering the keynote address at last year’s Edinburgh International Television Festival (usually an honor bestowed upon such media powerhouses as Rupert Murdoch and New York Times Company CEO Mark Thompson)—for their reliance on pilot season, pointing to the success of House of Cards as an indicator that Netflix’s model is the wave of the future:

“[With] this new form of distribution, I think we demonstrated that we learned the lesson the music industry didn’t: Give the people what they want, when they want it, in the form they want it, at a reasonable price, and they’ll be more likely to pay for it rather than steal it.”

“Well,” he added, “some will still steal it. But this model can take a bite out of piracy.”

Such kingly decrees might be easily be dismissed as the bluster of an actor with a new pet cause. Except, of course, Mr. Spacey is putting his money where his mouth is with the release of Now.

“This is the first time I’ve decided to distribute something on my own,” he said. “Quite often, the industry will undervalue films [and] slate them into a certain niche. Documentaries with a different allure [often] don’t do very well, don’t get wide releases. I wasn’t willing to give this one up, and I wanted to see how much of an audience was out there. If people like House of Cards, this is where it started.”

There are rumors Mr. Spacey is making another deal with Netflix for an original series, but for now all he’ll say is that after the Old Vic, he doesn’t want to run another building. He hinted at a return to singing—he had just performed at Carnegie Hall with Sting for a benefit, and has had concerts in Miami and the Chinese province of Macau. He might want to direct. House of Cards, which he calls the most demanding job he’s had outside the Old Vic, might be enough for now.

But as for the Hollywood comeback he seemed to hint at during this year’s Oscars? Mr. Spacey chalks that up to more media chatter:

NOW can be downloaded on May 2nd here, or see it in a number of theaters throughout the US.