When I was a child, I was into some weird shit. The first movie I remember being obsessed with was The Rocky Horror Picture Show, which my parents somehow felt it was appropriate for me to watch with my other 1st grade friends after school. We’d act out scenes in our backyard of Newark, DE; subsequently none of these kids were allowed over to my house after word got out. But I didn’t know better: I thought Rocky Horror was a musical about clowns. You know, like Jesus Christ Superstar. For a long time, I thought IT was a sequel to this film, until high school, when I found the actual sequel, Shock Treatment.

My second favorite movie, because of the obvious Tim Curry connection, was Clue. But ask child-age Drew what her third favorite movie was, and eventually I’d probably get around to Murder By Death, a Clue-like spoof of the detective genre by Neil Simon, with its all-star cast including Peter Falk (my biggest crush after Mr. Curry), Maggie Smith, Peter Sellers (in yellow-face), James Cromwell, Alec Guinness and Truman Capote. The 1976 film would be Mr. Capote’s only credited on-screen performance in his life.

Do you know Truman Capote was in Annie Hall? He was, playing the winner of the Truman Capote look-alike contest. He was never credited.
[youtube http://www.youtube.com/watch?v=KzHrdq_k8Ys&w=420&h=315]

So Murder was something of an anomly for the famous author: it’s his only filmed performance playing someone other than himself. And what a “someone” it is…Lionel Twain, the wealthy and reclusive host of the detective dinner party that turns into a night of murderous mayhem and goofs.
[youtube http://www.youtube.com/watch?v=znS3gXjGCiU&w=420&h=315]

Why is this relevant today? Because it’s Friday. Also because up until an hour ago, I was under the impression Mr. Twain was played by Paul Williams, the singer. Only by doing some Google-ing after watching my fourth favorite childhood film, Brian De Palma’s Phantom of the Paradise, did I find out that the character I thought was the petite crooner was actually the author of Breakfast at Tiffany’s.
[vimeo 33669779 w=500 h=375]

Paul Williams – The Hell Of It (Phantom Of The Paradise) from fazelinear videos on Vimeo.

The more you know, people. 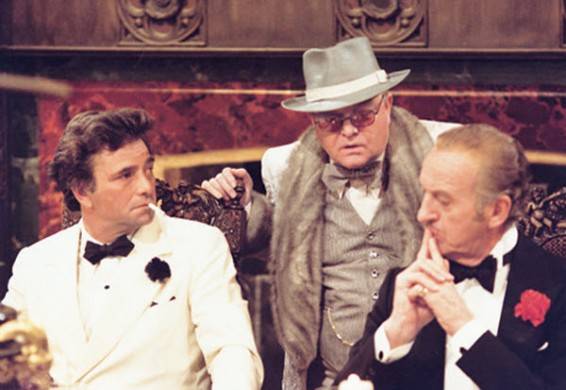