One MTA employee didn’t get the message. (Photo: Facebook)

MTA employee Christopher Chase decided to get in on the bare-legged fun this year, since he happened to have the day off. In a Facebook photo from the event, Mr. Chase is nothing but smiles and underwear. But he was in for a unpleasant surprise.

A fellow MTA employee, who is probably a really fun guy, anonymously complained about the photo. Even though the MTA officially sanctions the event, and even allowed a DJ to perform in one of the subway stations, they decided to write Mr. Chase up for “conduct unbecoming” to the Authority. He was reprimanded by his boss and had to make a written promise stating he would avoiding behaving in a way that could embarrass the MTA.

“I think it’s stupid,” Mr. Chase, who has been an MTA employee for nine years, told the New York Daily News. “I don’t see the point in making such a big deal over nothing. I wasn’t on duty or in uniform or anything like that, and it was a public event.”

Now Mr. Chase’s union, TWU Local 100, is involved and demanding that the incident be removed from Mr. Chase’s record. In a complaint to the MTA, TWU lawyer Betzabeth Sanchez called the punishment “plainly unreasonable” and a “chilling” violation of the right to free speech.

Yes, someone just invoked the First Amendment in a discussion about pants. 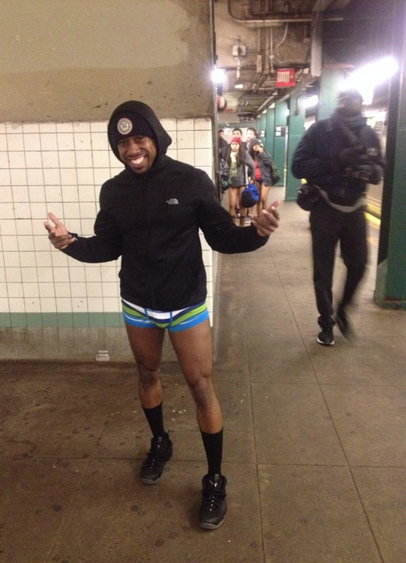