The media is inordinately fond of actress Emma Watson.

The 23-year-old British actress and Brown drop-out who played Hermione in the Harry Potter movies wore what has been termed a “one-of-a-kind,” “stunning” white dress with a “daring” slit.

The outfit, which, as befits a former child star, was the perfect balance of sex appeal and innocence and has resulted in the kind of rapturous prose, laudatory tweets and fangirl (or boy) headlines that publicists dream of writing themselves.

“Emma Watson is a perfect human,” Cosmo tweeted . “Emma Watson stuns in leggy dress at ‘Noah’ premiere in London,” wrote the Daily News.  “Emma Watson was a vision in white at the London premiere of ‘Noah,'” proclaimed The Huffington Post.

According to the New York Post, Ms. Watson “looked ravishing in a stunning white Ralph Lauren Collection dress, that featured thigh-high slit as dauntless as the biblical epic she stars in.”

Not that we expect tabloids and women’s magazines to be objective when it comes to celeb coverage. But this seems a bit much. Even Mail Online got in on the action. Although the Daily Mail’s website did note that the “naturally slender” actress may have “needed a little secret help to look her best” in the form of Spanx, that was used as further evidence of Ms. Watson’s general appeal.

But then again, this kind of coverage is fleeting. Just ask Jennifer Lawrence. 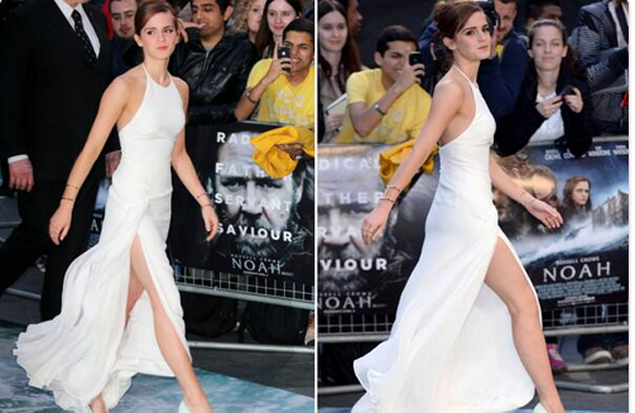