The Scottish neo-folk trio Lau, which will take the stage of the Mercury Lounge around the midnight hour tonight, is the subject of ballooning adoration across the Atlantic. They’ve won Best Group at the BBC Radio 2 Folk Awards four times, so many that a few wags have suggested that the award now be retired. They organized their own grassroots music festival in London, called Lau-Land, and sold out the venue; the next Lau-Land will be in a bigger space at the end of May. A critic for The Guardian gave a recent Lau show in Glasgow five stars and called them “the UK’s best live band.” High praise indeed, especially when you consider that the group consists of one guitarist/singer, one fiddler and one accordionist (who sometimes switches to piano).

Watching the performance clip above—the song is “Ghosts,” from their most recent album, Race the Loser—you get an excellent sense of the delicacy and depth in Lau’s work; it’s chamber soul, delivered in a heavy burr. You won’t find a great deal of humor in this particular selection, but one needn’t look far to find Lau-tian whimsy in abundance. An utterly charming video features accordion man Martin Green designing and constructing an instrument whose initial components include a cardboard beer crate, a set of silverware and some bottle caps. I’m not sure if you’ll see this creation at the Mercury, but simply to know that it exists warms the heart. 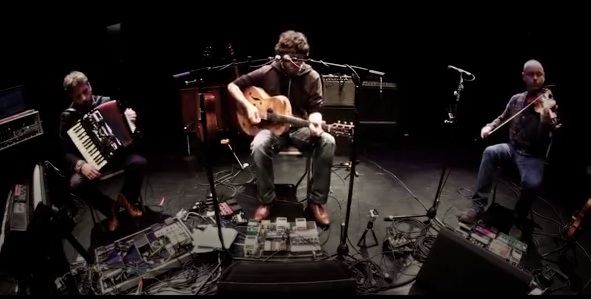