Well, that didn’t go as planned.

A man who attempted to carjack a cab on the Bruckner Expressway around 2 a.m. Monday got an eight mile ride after the cabbie hit the gas instead of giving up his taxi.

Police believe Matthew McCorkle, 26, of the Bronx, attempted to carjack Mohammed Millogo’s cab at 138th Street before clinging on for his life as the cab reached speeds over 60 mph, CBS 2 reported.

“He tried to hit my window with his elbow then he tried to break in and get in the car, and he told me to open the door and I said, ‘No, I cannot open the door for you,’” Mr. Millogo told CBS 2..

As the suspect tried to hold on, kicking the window and nearly falling a few times, Mr. Millogo called the police and slowed down out of concern for the man’s safety.

Vlane Carter witnessed the event from inside his car and filmed it on his cell phone.

“I was, like, really getting nervous, because the guy was on the hood at this time, on the top of the car. Then he was on the back, then he was trying to break the glass with his hand, and then the car was swerving. So it was like a Hollywood movie, almost,” Mr. Carter told CBS 2.

After holding on for eight miles, the cab hit traffic on the New England Thruway where the suspect hopped off and carjacked another vehicle.

After crashing his new wheels, detectives caught up with him.

Mr. McCorkle, whose prior offenses include drug violations, criminal possession of a stolen weapon, driving with a suspended license, and harassing a woman just last month, was charged with robbery, grand larceny and driving while intoxicated, CBS 2 reported.

He was awaiting his arraignment at Bronx Criminal Court late Monday after a mental evaluation. 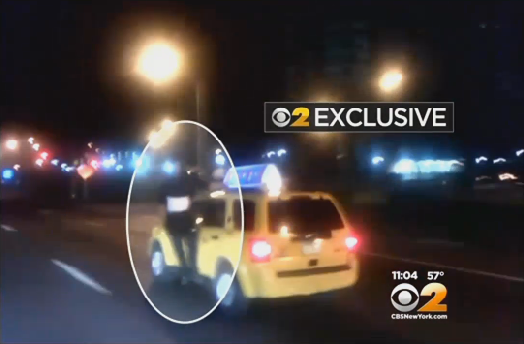