The large campaign-style effort launched to promote Mayor Bill de Blasio’s signature plan to raise taxes on the city’s richest residents to fund universal pre-K is winding down with a key staff departure following the signing of the state budget in Albany.

Josh Gold, who’d taken a leave of absence from the powerful Hotel Trades Council to manage the campaign, is in the process of transitioning back to his former job, and will go back to the union full-time after returning from the honeymoon he’s leaving for on Sunday, he told the Observer.

Mr. Gold had managed the day-to-day operations of the campaign, which succeeded in securing $300 million in state money to fund universal pre-K across the city.

The group reportedly spent more than $250,000 on lobbying efforts, but has refused to disclose how much it raised and from whom. A spokesman, who said back in March the details would be released in “the coming weeks” before the budget fight was over, declined to comment on those questions, in addition to queries about staffing, what would be done with any leftover money and whether parts of the campaign’s infrastructure would remain in place to champion the mayor’s other causes–or eventually, perhaps–his re-election campaign.

“The state budget is less than 24 hours old. No decisions have been made about the organization’s future,” the spokesman, Dan Levitan, said.

The group organized a “grassroots movement” in support of pre-K, collecting signatures, running phone banks and planning rallies and trips to Albany, where supporters lobbied lawmakers on behalf of the plan.

Today the group blasted out a message from Mr. de Blasio’s wife, Chirlane McCray, to supporters, declaring “a landmark day for all of New York City’s children,” and crediting their efforts for the budget deal signed by the governor today.

“You added your name, spread the word, and organized to make this happen. You created a groundswell over the past few months, and I’ve seen all that you’ve given for this shared belief of ours – a belief that all kids deserve a real opportunity to succeed,” she wrote. “Thanks so much for everything you’ve done.” 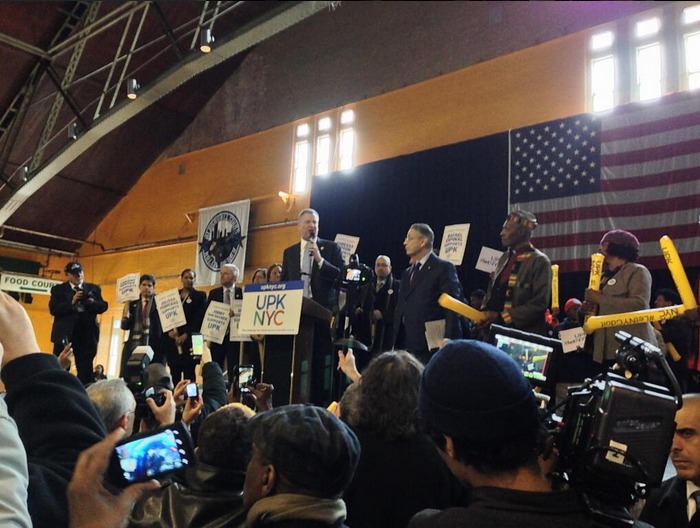