The 40-year-old Urs Fischer may end up being the greatest sculptor of his generation, but he’s not exactly rushing to secure that title. When he is in the zone, throwing himself at his discipline with gleeful extravagance, he’s unstoppable. But he is also a profligate producer, almost proudly inconsistent. I’ve been rooting for him, so it’s disappointing to see him stuck in a holding pattern in three concurrent New York shows.

The sculptures at the two Gagosian spaces are lumpy, figurative bronzes that almost exactly resemble the clay sculptures from which they were molded. Mr. Fischer made the original clay works—and hundreds more—with some 1,500 volunteers at his 2013 show at Los Angeles’s Museum of Contemporary Art. At MOCA, it felt like unpretentious fun, a goofy (and just-clever-enough) response to the demands of a grand space. It was entertaining and occasionally moving to see how this huge mass of people handled the clay and collaborated, even if it was a riff on group projects run by Paweł Althamer and others.

But Mr. Fischer’s decision to preserve select works in bronze feels like an easy and obvious move. The wizardry of the bronze castings dazzles, and is very much of a piece with Mr. Fischer’s zest for trompe l’oeil trickery, but it adds little to the project. That’s not to say there aren’t things to savor. Uptown’s lone work is superb—a raucous, roughly life-size update on the “Last Supper,” the table strewn with McDonald’s fries, Jesus swilling a can of Bud, Matthew before a can labeled MALT LICKER. Downtown, a former Chase Bank branch teems with pieces, including a Napoleon bust, a Saint Sebastian and a reclining ruin of a mermaid—the best work here, its base was made after the MOCA show, when it was converted into a charming fountain.

At Lever House there are 26 of Mr. Fischer’s trademark mirrored boxes, which are silk-screened with ultra high-resolution photos of objects, typically blown up larger than life: a soy sauce bottle, a banana, a stalk of asparagus. I like to think of them as updates on Dutch vanitas still lifes—hyperreal, consciousness-tweaking devices. Stars of his 2009 show at the New Museum, they’re awesome, and also old news. An inveterate crowd-pleaser (and in that the defining artist of his generation), Mr. Fischer is repeating himself when he could be doing so much more. These days, younger artists are nipping at his heels, taking his ideas into all sorts of promising directions. His influence is everywhere. Will he be a lasting presence, or a transitional figure? It’s his game to lose.

Update, 12:20 p.m.: The post has been corrected to reflect that the base of the mermaid, not the actual sculpture, was made after the MOCA show. 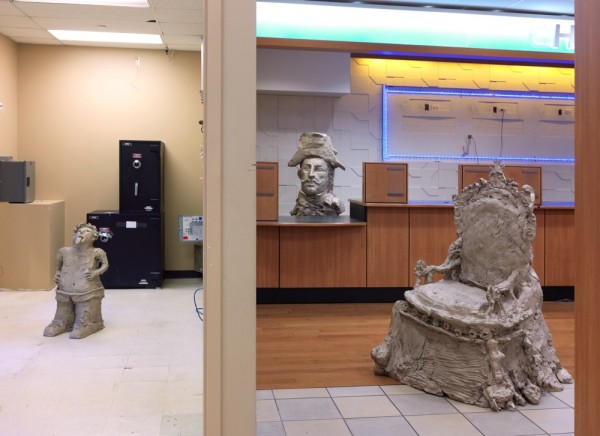