Getting updated on the “no presidential selfies” rule. (HBO)

People who do the “cell phone bowl” game are the new “we don’t own a TV” crowd, except worse, because they foist their smug, cell-less lifestyle upon you, hapless victim who just wants to play Angry Birds at a wedding. So maybe it was perfect to have the new season of Veep (tagline: “Like House of Cards! But funny!”) start with this totalitarian move at the nuptials of Mike and a reporter named Wendy (played by Kathy Najimy.) Of course, since it’s a wedding where the bride’s side consists of D.C. hacks and the groom’s are all flack, everyone’s a little trigger itchy.

And well they should be! Selina is on a book tour in Iowa (Some New Beginnings: Our Next American Journey, which is “so full of shit there’s a colon smack dab in the middle,” according to POTUS chief-of-staff Ben), and as incompetent as her team back home can be, they’ve got nothing on the away team: a guy whose version of running defense for the VP has her taking an imaginary phone call from “the prime minister of Scotland” during a funeral. (Apparently there are no cell phone bowls at wakes.)

The president still hasn’t announced that he’s not seeking a second term (no President Fitz he!), but it’s just a matter of time. Meanwhile, Secretary of Defense Maddox is resigning, and it’s all being captured on Jonah’s “gossiptainment” blog, Westwingman.net. So while Dan and Amy one-up each other on creative ways to store a backup Blackberry in order to snag Selina’s campaign manager position, I’m thinking…maybe I’ll just let people keep their damn phones during the wedding. Just no tweeting.

Besides, this episode gave me a great idea for what to ask for on the registry: my own personal Gary. While Selina’s gone, Gary needs a new mommy to body man, and who better than the bride herself? (“You’ve met her, you can call her ma’am,” Gary murmurs helpfully into Wendy’s ear when she gets a congratulatory phone call from “Madame Vice President.”)

But isn’t Veep really about the dangerous faux-pas technology allows us? Like Jonah getting fired after he tried to delete the photo he put up of Selina’s team scrambling for the phone bowl. (Yeah, turns out you can’t run a D.C. insider blog, even a gossiptainment one, while on staff at the White House. Oh well, Jonah 2026!) Or Gary on Facetime (Wait, don’t they all have Blackberrys?), trying be Selina’s right-hand man on remote during the funeral. Last season explored the dangers of the Internet’s meme-making abilities, but now, fittingly, the issues are more about communication than dissemination. How are these people supposed to lead a country when they’ve got one eye on a screen?

It can’t be too long until these machinations of the modern world blow up in the VP’s butter-smeared hands (thanks Iowa!): how long until her Tinder profile shows up on Westwingman.net? 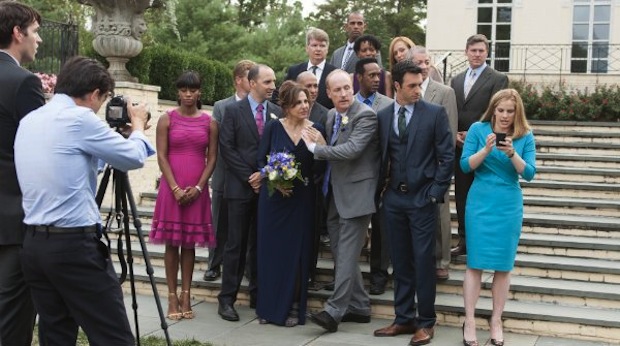