PATERSON – Donning caps and sporting fierce grins, politicians this morning did their best to pretend all of this is really ultimately just about baseball in an event outside the dilapidated Hinchcliffe Stadium above the Great Falls.

But there was another pastime that inevitably leaked into the ceremony officially designating Hinchcliffe a national landmark, and an especially bruising one with 27 days left to go in the Paterson Mayor’s race.

At the center of the drama, ties flapping in the breeze, stood incumbent Mayor Jeff Jones and U.S. Rep. Bill Pascrell (D-9).

PolitickerNJ has exhaustively recorded the animosity between the two men, which stems in part from Jones’ resistance to the congressman’s plans for the development of the Great Falls and his subsequent decision to back Steve Rothman over Pascrell in a 2012 Democratic Primary that Rothman lost.

Steps away from where the two political enemies sat side by side, in the front row of a crowd of people, mostly youth, prepared to undertake a volunteer day of prepping Hinchcliffe for future renovation, sat Council President Andre Sayegh.

While Pascrell hasn’t formally endorsed in the mayor’s contest, the same political team that backed him when he fought off Rothman now supports Sayegh.

“I tried out with the Philadelphia Phillies,” diehard baseball fanatic Pascrell reminded the crowd.

“Obviously, I didn’t make it,” he added. “But I still want to play baseball, even at my age. Twelve years ago I was playing for the Congressional baseball team and standing out in center field where the Washington Nationals play and I thought to myself, ‘I finally made the major leagues.’”

The pols stood out in front of the tiled and stucco building constructed in 1932 during the Depression to create recreation for Patersonians who slaved in the surrounding mills.

Through the years, the stadium has housed many sporting events, including wrestling, boxing and baseball, featuring the legendary Larry Doby.

Moments later, Jones occupied the same place behind the dais. When he mentioned the stadium’s condition, someone in the crowd yelled “Potholes,” a road rage reference that passed without amplification.

Jones said he plans one day to go to the stadium with his granddaughter. “We must make sure we leave a legacy, and not one in disrepair, but where people come together and make good things happen” the mayor said.

The crowd spilled into the stadium to do a preliminary scrubbing of the faded complex.

“This was another funny event where everyone was forced to come together,” an insider cracked through the cold.

A short time later, on the other side of the city, Freeholder Terry Duffy welcomed Sayegh in to the River Street tavern he’s owned and operated for 31 years.

“I’m backing him,” he said of the candidate. “I don’t live here, but I have two sons who are police officers, a son who’s a firefighter and a daughter who’s a school teacher, all in Paterson. Sayegh’s a guy who’s visible. He’ll be a great mayor. I’m putting my neck on the line with this. If Sayegh doesn’t win I realize I’m a target for retribution. But I’m doing it anyway.”

PolitickerNJ asked Duffy who he liked best as mayor over the last three decades.

“Pat Kramer was a gentleman’s gentleman,” the tavern owner politician said. “Frank Graves ruled the town with an iron fist, and Bill Pascrell was down and dirty – in the best sense.

“I just think it’s time that someone lifted this place out of the quagmire,” he added. “And I think Sayegh’s the guy to do it.”

There were two murders in the city yesterday.

“You may not physically reside here,” a grateful Sayegh told Duffy, “But everything you have is here.”

Someone at the bar hit the inside metro section of the Herald News with the back of his hand, indicating a story about Aslon Goow, another mayoral competitor. The city wants him to pay more than $500,000 to cover legal fees Paterson incurred defending municipal officials against the former councilman’s unsuccessful federal lawsuit. The story is here.

Goow told the paper that his enemies pushed the story because he’s the frontrunner. The world in Duffy’s Tavern had recalibrated from baseball, back to politics. 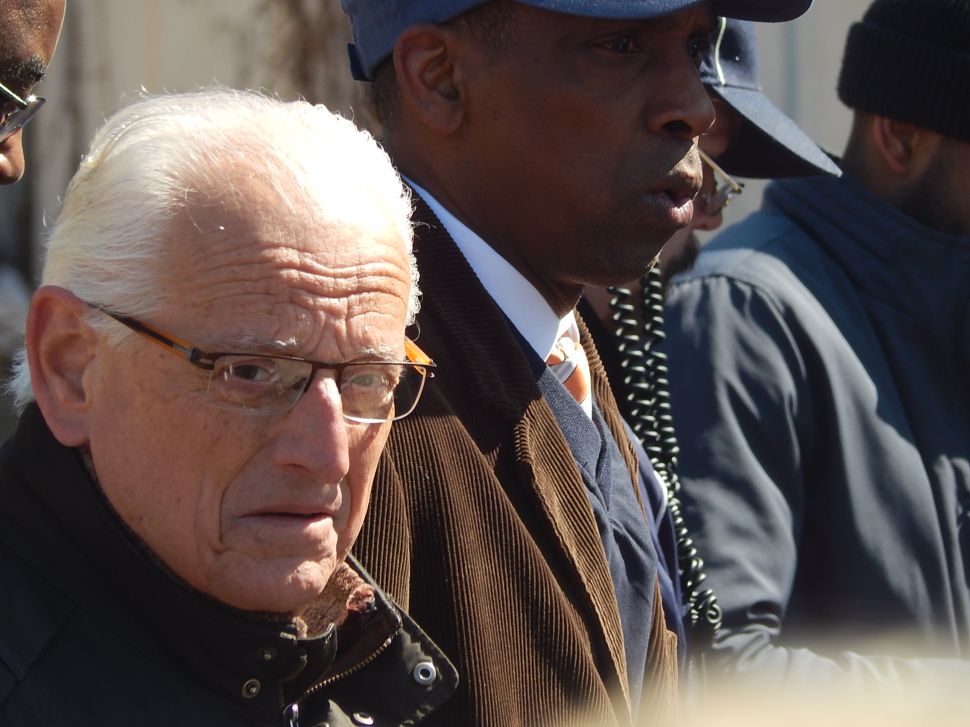