1. Who is the new recruit at Castle Black who knows how to fight so well? Haven’t we seen him somewhere before? What is he doing there?

The new beardo who is trying out for the Night’s Watch is named Locke, and if you’d read the books, you’d know that … haha, just kidding, this dude’s totally not in the books at all. They made him up for the show. But you’ve definitely seen him before: he’s the guy who cut off Jaime’s hand.

In the books, Jaime gets his hand cut off by a weirdo named Vargo Hoat. That guy was more of a free agent, but the version of him on the show, Locke (played by the fantastic actor Noah Taylor, who once played a young Adolf Hitler and was also in the Tomb Raider movies) , is sworn to House Bolton. You know, the house that betrayed the Starks at the Red Wedding by killing almost all of them. The house whose symbol is the “flayed man,” with the crazy bastard son who made Theon Greyjoy into a husk of a person. Lovely folks.

Having discovered from used-to-be-Theon that Bran and Rickon Stark are still alive, Roose Bolton thinks they may have gone to join Jon Snow at the Wall and has sent Locke to go find them and capture them. Locke is posing as a recruit in order to ferret them out. Having presumably heard Jon’s speculation to Sam that his brothers have found shelter at Craster’s Keep, Locke has now attached himself to Jon’s expedition to see if he can find the Stark boys up there.

2. Isn’t Jaime in love with Cersei? Why is he going directly against her wishes here and trying to save Sansa? And she is the queen regent; can he really defy her this openly and get away with it? Can he really just give away the sword his father gave him?

Jaime has always been more than a little impetuous, even to the point of recklessness. So it is not ultimately that surprising that he’d go against the wishes of his sister, especially when she is determined to kill their brother for a crime Jaime knows he did not commit. He knows that she is in the wrong here, and he is determined to do right in whatever way he can.

Despite everything he has done, Jaime actually has a very strong sense of honor. This certainly seems to have a lot to do with how he is seen by the world, with maintaining a reputation. But he also has an internal nobility that is shining out more and more in the presence of Brienne (and as he realizes what a devious witch his beloved sister is).

He has always hated his nickname, and the public image of him as someone who dishonored himself by breaking his oath and killing the Mad King. But it is also that in breaking that oath he was still doing what he knew in his heart to be right—he knew saving the thousands of inhabitants of King’s Landing from being burned alive was the greater good, more important than his oath to the king.

So now he is determined again to follow his own sense of right and wrong and do the noble thing, despite the consequences. He can keep an oath he made to Catelyn and save an innocent girl. When Brienne names the sword he gives her “Oathkeeper,” he truly looks like he is about to cry.

3. Why is there another direwolf in a cage at Craster’s Keep? Didn’t each of the Stark kids have a direwolf as a pet? Where are they all now?

The direwolf in the cage is Ghost, Jon Snow’s pet. If you recall, in the first episode of Game of Thrones, they find a litter of five direwolf puppies whose mother has died, one for each of the Stark children. And then they discover a sixth, the runt of the litter, an albino wolf with red eyes, and it is given to Jon, who is “not a Stark.” Ghost accompanied Jon to Castle Black, and then it went along with him on Qhorin Halfhand’s expedition north of the Wall, but then when they were up there, the wolf started ranging farther and farther away. Later, Ghost reappears when the Night’s Watch is fighting the White Walkers at the Fist of the First Men, and accompanies the survivors back to Craster’s Keep. At some point between then and now, the mutineers at Craster’s have captured Ghost and put him in the cage.

As for the other direwolves, two are dead, two are with the Starks and one is missing. Bran has his direwolf, Summer, with him, and he frequently “wargs” into his pet and sees through his eyes, such as when he discovers Ghost in the cage and gets trapped himself. Rickon, the youngest and least useful Stark, has his direwolf Shaggydog with him wherever he is hiding out together with the wilding woman Osha.

Robb’s direwolf Grey Wind (not to be confused with Grey Worm, the leader of the freed Unsullied) was killed with his master at the Red Wedding, shot with crossbow bolts by the Freys. To mock Robb and the Starks after the murders, they removed Grey Wind’s head and sew it onto Robb’s body and then paraded the body around the streets on a horse.

Nymeria, Arya’s pet, protected Arya when Joffrey was about to attack her, biting the vicious princeling on the arm. Afraid that they’d kill Nymeria for it, Arya sends her away, and she is now missing, roaming around somewhere in the Riverlands. In retaliation for the bite, Cersei demands that Sansa’s direwolf, Lady, be put to death instead, and Ned carries out the order. This displaced punishment is a neat foreshadowing of Cersei’s motives in the current episode, where she is determined to kill Tyrion to avenge her son’s murder—whether or not he is actually the one who committed it.

4. Why does both Jon Snow and the guy who hates Jon Snow want him to go to Craster’s Keep?

Good question! Between Jon and Bran, Craster’s Keep–aka, where Gilly and her non-zombified Ice Baby are from–is the new hot spot for unwanted Stark children. (Not including: Rickon, Arya and Sansa…Jeez, there are a bunch of Stark kids left, when you think about it!)

Craster’s is north of the wall, which…technically, makes it a dangerous place to visit. The first couple times we saw the place, it was being run by Crazy Craster, a man who liked to have sex with his daughters and throw his male babies out to the wild. But during the rangers’ last sojourn back to the wall, Craster’s was taken over by a bunch of mutinous crows, who also killed Jeor Mormont, head commander of the Knight’s Watch.

Jon, who correctly posits that Bran will be passing by Craster’s, wants to go pick up his younger brother. The current commander wants Jon to go because he figures the crows living at Crasters will kill him and thus save them the trouble of having to do the dirty deed themselves.

Fun fact: The guy who is sipping out of skulls at Crasters is definitely from The Dark Knight Rises, making him the second character (besides Littlefinger) from that movie to be featured in Game of Thrones.

5. Why is Margaery making “F*ck me” eyes at Tommen? And why is that family so creepy about marriage?

Right??? You’d think at this point, marrying into the Tyrells would be an automatic death sentence. But Margaery’s claim to the throne is now tenuous, thanks to her grandmother killing her husband before they ever did the dirty deed. (One wonders why, if this was Olenna Redwyne’s plan to begin with, she didn’t work out this little kink so that Joffrey would die after consecrating the marriage bed? But hey, let’s roll with it.)

With two dead kings at her feet, Margaery now has to convince the Lannisters to let her marry their youngest, the 13-year-old (approximately) Tommen. And as Olenna mentions in what has become an extended “How I Met Your Grandfather” monologue,  the best way to do that is to seduce a guy by pretending to get lost looking for your bedchamber. Margaery popping up in Tommen’s room is her way to seduce the boy and take control away from Cersei. If she can get Tommen to love her more than he loves mommy, then it’s technically his decision who he marries and Margaery gets to be queen.

(It’s kind of unclear if Margaery is technically a queen now, but Cersei is back to being called Queen Regent, so ostensibly the title is still up for grabs. Has Tommen been crowned yet? Is the Iron Throne just kind of sitting empty? Someone should really get on that.) 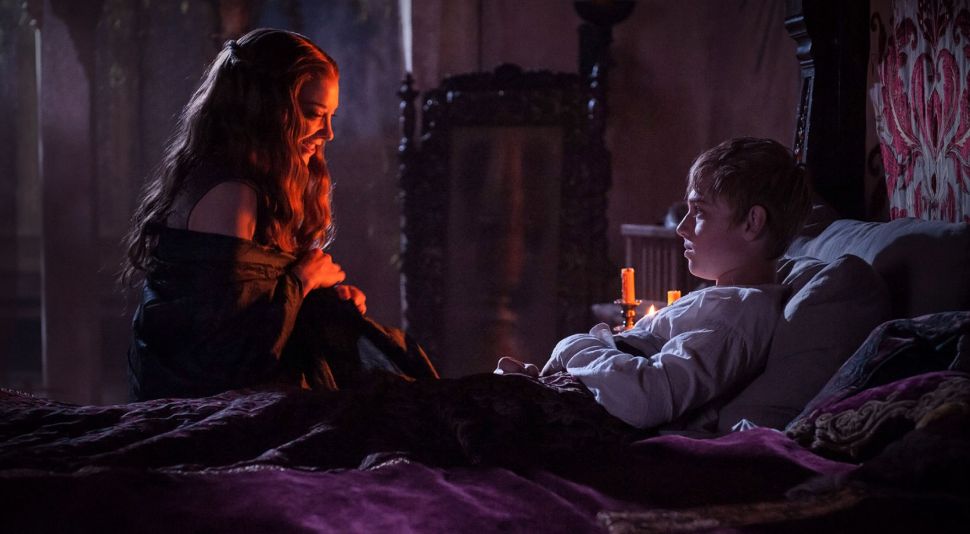