During the snowy, drawn-out winter, residential real estate sales took a hit but not as bad a hit as you might think. Less people turned up to viewings on the worst weather days, so the eager beavers who showed up were lucky. Seems like the law of averages, right? Wrong. Psychologists would say there was more than mere numbers at work. Those with determination of spirit and a goal in mind got the deals.

Robert Dankner of Prime Manhattan Residential, who sold a loft apartment at 7 East 17th Street for $3.3 million on one of the snowiest days, told the Observer:

“People who bother to battle subway stoppages and blocked streets to get to you are very determined to get a deal, so that is a positive in their favor. They may be the only clients viewing that day and if the seller needs to get moving, the clients make an offer and the deal gets done.

“I prefer viewings on a bad weather day because clients see a place at its worst, and if they like it then, we can return when things are better to really finalize their decision.”

Random circumstances including bad weather expose the truth. Real estate may be an industry of high finance but beneath the surface, “This is a far more emotional business than many realize,” said Mickey Conlon, one half of CORE Real Estate’s most successful duo with partner Tom Postilio. “Feelings can get in the way for buyers and even cloud their decisions. As a realtor, you sometimes need to be the therapist or sounding board for what is happening elsewhere in a client’s life. The key to success for agents and buyers lies in staying focused. That’s the reason why some agents are more successful and why, occasionally, buyers lose out on a property they should have bought.”

“Property viewing is seldom a relaxed stroll around a potential pied-à-terre. Most people squeeze viewings in between workdays and the gym, babysitters and family duties or a million and one other time suckers. All of these circumstances can really get in the way for a client,” added Mr. Postilio.

Factor in the limits of an individual search, such as actually needing two full bedrooms instead of one, or a waning mortgage offer with only three weeks left to complete an application, and the picture is clear. Stress can overwhelm and even shape how a property is viewed.

“I have had clients arrive in a terrible mood because, say, they drove around the block for hours and couldn’t find a parking space or something else occurred to make them cranky,” Jessica Cohen of Douglas Elliman told the Observer.

“The clients walk in seething and can barely even see the walls of a place that is ideal for their needs. It is hugely disheartening, when as a realtor, you have worked hard to find a place that ticks all the boxes for a client. This means it’s very important to be able to read their moods  and give them space on a viewing if they need it. The best result is to invite them back for a second time if they are just not seeing the place clearly,” Ms. Cohen said.

Ruthless brokers could capitalize on buyer’s stress, added Mr. Conlon, “but that would only lead to a bad deal which would collapse down the line and waste everyone’s time. It’s not in an agent’s interest to pressurize.”

The more the modern broker understands about human psychology, the less likely they are to try and push a sale through that might be wrong for their client, even if the client seems to have ‘fallen in love’ with a place.

“My husband and I viewed an apartment on the Upper West Side that was so charming we fell in love immediately,” explained Katy Dukes, mother of two teenage boys who had outgrown their shared bedroom in a rental. “However, it turned out that the second and third bedrooms had no windows and were too small for our sons. I was so in love with the huge living room with wrought iron balconies and charming street views on the front of this property on West 100th and Riverside, I wanted it there and then. My realtors, though, knew it was wrong and that I would regret the decision later. They literally talked me off the balcony and later found us a much better option.”

A report by Realtor.com originally conducted for Valentine’s Day found that 69 percent of its users confessed to having had a “home crush” and having fallen in love with a property that did not properly meet their needs. There is no doubt among brokers that deals often fall apart down the line after a buyer mistakenly fixates on one thing they love about a property that blinkers their view of every other aspect.

“Buyers can be overly influenced by how they feel about something right now versus how it might actually turn out if they bought. They sometimes think they are more rational than they actually are,” said Mr. Dankner. “It’s my job to keep a level head.”

The one big influence on the psychological factor is price. Peter Noel Murray, Ph.D., is principal of a consumer psychology practice in New York City. He advises corporations and not-for-profits on consumer spending and behavior. “There are two main factors at work in a property viewing process. Firstly, price is everything—it instantly sets the tone for a transaction. A low price means people can be pleasantly surprised. A high price is just asking for disappointment and the ‘They want how much?’ attitude.”

“The second component is the moment,” added Mr. Murray. “People reach a buying point in their lives and it happens at a particular moment in time. It could be that their finances came through all of a sudden, or it could be they’ve been looking for months and need to make a decision because other circumstances depend upon it. Pressure pushes a purchase forward but it can also cause decision-clouding stress.” Mr. Murray suggested that potential buyers benefit from analyzing their feelings and all the circumstances surrounding any stress, in order to detach from it and make the right decisions.

Ms. Cohen advises potential buyers to toughen up. “If you are a buyer, sort out your emotions before going to a property viewing. I have had people say ‘The doorman was not very nice on the way in.’ I say, if the price is right and everything else works, we can fix that. Emotional niggles can be mended, whereas one bedroom too few or a brick wall view through a window cannot.”

Improved weather as spring finally arrives means the viewing process will be a little easier for buyers and sellers alike. Brokers are gearing up for a busy season. 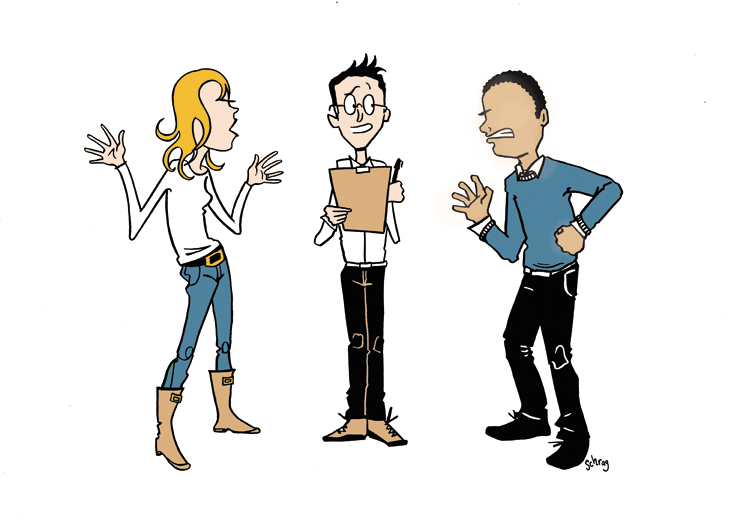