PATERSON – That old rivalry between Aslon Goow and Jose “Joey” Torres permeates the 2nd Ward, and spills now into the May 13th mayoral contest, but at a candidates’ forum last night on the home turf of these two men, a third contender tried to break through the predictable muzzle flashes of ward politics.

Within walking distance of their respective homes, Goow and Torres mostly avoided each other on the long dais on the gym stage in School No. 27. Their cheering sections supplied requisite bursts of frenzy in the packed crowd after each sound bite.

But it was Maria Teresa Feliciano in her closing remarks who tried to channel public frustration with the city into an indictment of every male figure in local government.

She dismissed the whole bunch, arguing that anyone in elected office right now trying to present himself as credible needs to go elsewhere.

“We need a public servant, someone who’s going to be there for the bricklayer, the taxpayer, the teacher, not a specialist in wheeling and dealing for his own benefit,” she said.

Prior to the forum, Feliciano dismissed all of Paterson’s veteran male contenders as “unattractive,” then amplified the point during the q and a with her case that Paterson – which laid off 125 police and lost an additional 25 to retirement to close a $78 million budget deficit – needs a full-on scrubbing.

While noting her vigor on the trail and her campaign’s visual impact of sawing into old pockets of Torres support with signs and displays of activity, detractors argue that she lacks a professional operation and is hampered by the presence in the contest of At-Large Councilman Rigo Rodriguez.

Both Dominican candidates trying to broaden their reach out of the city’s largest growing ethnic population, Rodriguez and Feliciano are tearing each other up in a fistfight for Dominican votes, according to those who want to see both of them lose.

A consistent critic of Torres, and aided, according to her allies, by Rodriguez’s legal woes (he’s under indictment for election fraud), Feliciano continues to try to make the case that she is the strongest candidate in the contest – and the strongest Hispanic in a city that is 60% Hispanic.

“I don’t believe in intellectuality,” Rodriguez declared last night at the Hillcrest Neighborhood Association. “I believe in being smart about certain things. I am a victim of the establishment that has brought us to where we are today.”

Trying to withstand the barrage by other candidates compressing him with incumbent Mayor Jeff Jones as a helpmate of 12 years of failure, Torres opined, “I would say 30 years of social and economic problems have plagued Paterson.

“But I am the only candidate to have engineered projects to move the city forward,” added the mayor from 2002 to 2010. “I am the only person here to have worked with three governors to bring in over $400 million in state aid.”

“The new agenda is charter schools,” he said, noting Paterson’s reliance on the state and slapping down those making the case for more city engagement.

“It’s a profit-making business,” the mayor added. “$500 million will not be in our hands. The school board is an advisory board. We are not going to tell the governor to unleash the dollars. Don’t be fooled. It’s not abracadabra. It’s politics.”

Goow argued that he will be able to work better with Christie than Jones.

“We need to develop a better relationship with Trenton, and I honestly believe this governor will help us,” said the former 2nd Ward councilman.

Insiders are beginning to see evidence of Sayegh’s campaign team at work. Some of his operatives used to do jobs for Torres, and now liken the former mayor’s effort to haymakers and roundhouses as they describe their own campaign as a steady strategic diet of jabs and crisp right hands.

Gilmore and Torres have been friendly throughout this contest, with the latter leaving open the possibility that Gilmore could work in his administration.

In his closing statement, Gilmore erupted on Sayegh after the council president vowed to rearrange the city with the kind of economic vitality he has helped oversee in the 6th Ward.

“He acts like he’s done it all, but he inherited a vibrant business community,” Gilmore said.

It was that criticism that prompted Feliciano, initially introduced at the event as “Maria Teresa Fisaco,” to go on her tear of everyone around her – with the exception of Housing and Human Services Director Donna Nelson-Ivy, the only other woman in an eight-person race for mayor. 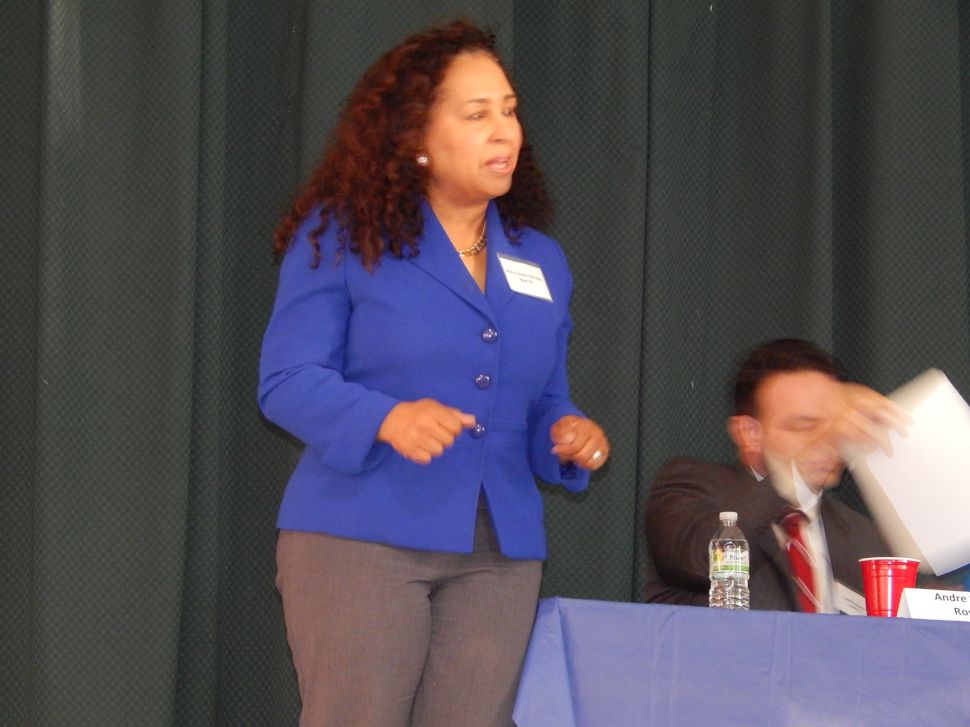