The group also backs incumbent Mayor Wayne Smith and two members of his team in Irvington.

Mayor of Paterson from 2002 to 2010, Torres is one of seven candidates challenging incumbent Mayor Jeff Jones.

“Joey Torres is a candidate with a proven record of results who will put Paterson and its residents first,” said Analilia Mejia, executive director of NJ Working Families. “Torres understands how government can implement quality of life initiatives to improve the lives of working families.

“His firm commitment to creating affordable housing for all of Paterson’s residents, supporting small businesses, investing in public safety, defending public education and creating green spaces show he’s the right candidate to fight for Paterson’s 99%,” she added. “Now we’ll go to door to door to ensure he has that opportunity.”

In Trenton, the organization backs Jackson, a Plainfield DPW director and one of six candidates running to succeed disgraced Mayor Tony Mack.

“Eric Jackson is the right choice to get Trenton back on track and advance a bold progressive agenda on behalf of its residents,” said Mejia. “Whether it’s his plans to increase preschool enrollment and empower teachers or his commitment to advancing pro-worker policies like earned sick days, Eric Jackson has already shown he’s willing to stand with working families. Now we’ll stand with him and work to make sure he’s elected as Trenton’s next mayor.”

The group also announced endorsements of Andrea McElroy, Lionel Leach and Al-Tariq Shabazz (who is not running on Smith’s slate) for at-large council seats in the 2014 Irvington municipal election.

“We enthusiastically endorse Andrea McElroy, Lionel Leach and Al-Tariq Shabazz for the Irvington Council because of their firm commitment to progressive causes and positive vision for the future. Irvington is quickly becoming one of the most forward-thinking municipalities in New Jersey thanks to Mayor Wayne Smith’s leadership on the foreclosure crisis and his support for pro-family policies like earned sick days. We believe that these candidates will build on that outstanding record and work with Mayor Smith to advance policies that improve the daily lives of Irvington’s working families.” 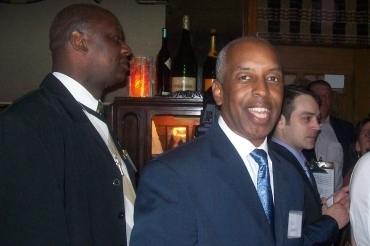