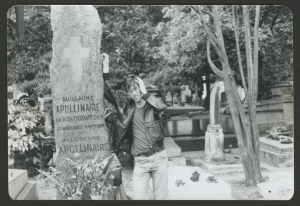 The Fales Library at New York University, which owns the papers of David Wojnarowicz, has made the artist’s journals available online. The earliest journal is from 1971, when Wojnarowicz was still a teenager, and they continue up until his death of AIDS-related illness in 1992.

The journals include sketches, dreams, poems, news clippings and scattered thoughts. The writing becomes increasingly tragic as Wojnarowicz descends into his illness–one particularly unsettling passage, a draft of a letter to a friend from the last year of Wojnarowicz’s life begins: “I think sometimes that the best thing is to die if I don’t get relief.”  (There is a big X slashed across the text.) But most intriguing is the wealth of poignant musings on art and politics. One diary entry, from a trip to Berlin, written Jan. 8, 1984, reads: “Slightly sad but good at last—removed from the handcuffs of taste and dictation of critics—free to make anything or nothing.” Have a look here. Lots to see.