Step aside, Ellen, because a bunch of koala bears in a Sydney zoo have just become the new masters of selfie-taking.

As Australia’s The Telegraph reports, three koalas at the WILD LIFE Sydney Zoo at Darling Harbour are rising to stardom over their newfound obsession with selfies.

They’re not using iPhones (that would be really hard, given their oddly-shaped paws), but a Sony QX100 camera, which has been installed in their enclosure. The camera, which was reportedly installed a few weeks ago, consists of a small lens attached to a tripod with bendable legs — easy for wrapping around a tree branch. The koalas’ movements trigger the camera to capture images, which are then displayed on a nearby screen.

“The majority of WILD LIFE Sydney Zoo visitors either take photos of or with the resident koalas,” Zookeeper Kylie Hackshall told The Telegraph. “It was great to do something where the koalas themselves get to own their moment in the spotlight.”

Much to the delight of us koala fans on the other side of the globe, The WILD LIFE Sydney Zoo has also been posting the koala selfies to its Instagram account. The koalas, by the way, are named Bruce, Aaron and Bill. You’re welcome.

We think they took this one just to spite us, because we told them people don't want to see photos of their meal… #koalaQXselfie #instatakeover #sony #WILDLIFE #Sydney #Zoo

It had to happen eventually with all these #selfies being taken… it's a #photobomb ! #koalaQXselfie #WILDLIFE #Sydney #Zoo

It’s an Instagram koala takeover! Our koalas think they can take better photos of themselves than us, so we’ve given them our Instagram login details. Armed with Sony’s new QX camera, Jay and Bruce are going selfie crazy! #koalaQXselfie #WILDLIFE #Sydney #Zoo 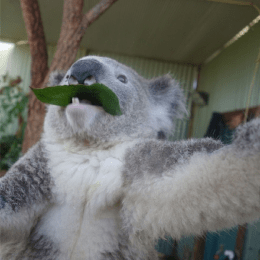