It’s been four years since last we heard Jack Bauer utter sotto voce imperatives at a string of individuals less noble and competent than he, but alas, he came back to us last night in the two-episode premiere of 24. (Which is actually being billed as an “event” rather than a season, titled Live Another Day, as, I believe, a reference to Austin Powers that is also probably the name of a Taylor Swift song, and, since we’re at it, possibly the tagline for a pharmaceutical company?)We pick up our characters several years in the future, in London, where Jack is on the lam and considered a treasonous terrorist with designs to harm the United States. Which is insane, because Jack is sooo not a treasonous terrorist with designs to harm the United States, you guys. And it makes me angry, as an American, that the powers that be can’t see this about him.Questions? We’ve all got ’em. Here’s what the first two episodes did and did not address.Answered Questions:
1. Is this season of 24 about the end of the world?Why yes it is! The terrorist plot Jack must thwart this time around involves a scheme to kill the American President while he’s visiting London, by hijacking and detonating some of United States’ very own drones. According to one of the lower level, soon-to-die bad guys behind the plot (played, it seems, by Ty Burrell’s emo brother with access to Taylor Momsen’s makeup kit), this will set off a domino effect that will basically end the world as we know it. Meaning: no more television events!2. What will our characters be wearing this season?Jack Bauer wears a leather jacket. Beneath that is a black hoodie, and under the hoodie is a gray t-shirt. The shirt covers up his horribly scarred chest, which looks like it might contain a map of Carcosa. The new bad gal agent Kate Morgan (played by Yvonne Strahovski from “Chuck,’ who has seemingly been typecast as an intelligence operative despite looking like Barbie) has her out-of-control hotness toned down with a sensible button-down plus cardigan ensemble in various shades of grey. Kate will likely become an ally of Jack’s as the day progresses, which means that cardigan will probably pick up some blood stains. Our hacker character Chloe O’Brian wears a Girl with the Dragon Tattoo Halloween costume, which, to be honest, feels a little on-the-nose. 3. Is it a problem if the President of the United States has Alzheimer’s?Only kind of. 24′s President James Heller does, in fact, have a rapidly progressing form of Alzheimer’s, but in terms of leading the Free World, this isn’t treated as a dealbreaker. President Heller will continue to run the country at half-capacity, dozing off during important meetings and sharing national security secrets with pigeons. And he might get confused and try to have sex with his Secret Service agent, but… oh wait, that’s House of Cards.4. How many Game of Thrones cast members are in this show?Just one, so far! It’s Catelyn Stark and she appears to be the mastermind behind the plot to kill the senile President.Unanswered Questions:

1. Who graffitied the hacker den where Chloe hangs out?Crucial to this season will be Chloe and her group of hacker pals led by a super creepy Julian Assange-type named Adrian Cross, who all hang out in a secret lair located somewhere in London. (It’s probably in Shoreditch; I’ve read on fashion blogs that Shoreditch is a very hip neighborhood.) The walls of this lair are covered in neon graffiti that looks to be pretty fresh. So, did the hackers spray this graffiti themselves? Unlikely, as they seem a rather serious bunch. Did a graffiti artist break in and do some damage in the night? No way, for that place has got to be pretty secure. Did they hire a local hooligan to make their den look cool? Depends on whether these techies are developing an app.2. Why is Jack Bauer so goddamned nobel?The fact that Jack is once again willing to put his life on the line to protect the country that has labeled him a traitor and a terrorist seems insane. If this were an Alanis Morissette song, Jack’s actions would be called ironic. (Equally, the fact that the President is the target of an attack by his very own drone is a real black fly in the guy’s Chardonnay.) So what is Jack’s deal? Is he truly the most virtuous human being on the planet? Or is there finally going to be something in it for him? Or is Jack simply intent on protecting the free world’s continued ability to have television events?3. How will the real-time format work with only 12 episodes?This show was, of course, built on its format of 24 episodes that take place over 24 hours, but Live Another Day will play out in only 12 eps. The premiere was a continuous two hours, so there hasn’t yet been any indication of how this is all going to go down. If there are gaps in time, I will pretend our characters spend all of them peeing and brushing their teeth.4. Is Sandra Bullock better off without Tate Donovan?Possibly. His hair has gotten a little weird and his Chief of Staff character is annoying, but Sandy has made some poor choices since breaking off her engagement with Tate in the early 90s. All in all, though, he is no Kiefer Sutherland.
[youtube http://www.youtube.com/watch?v=uh6ir2m5SLw] 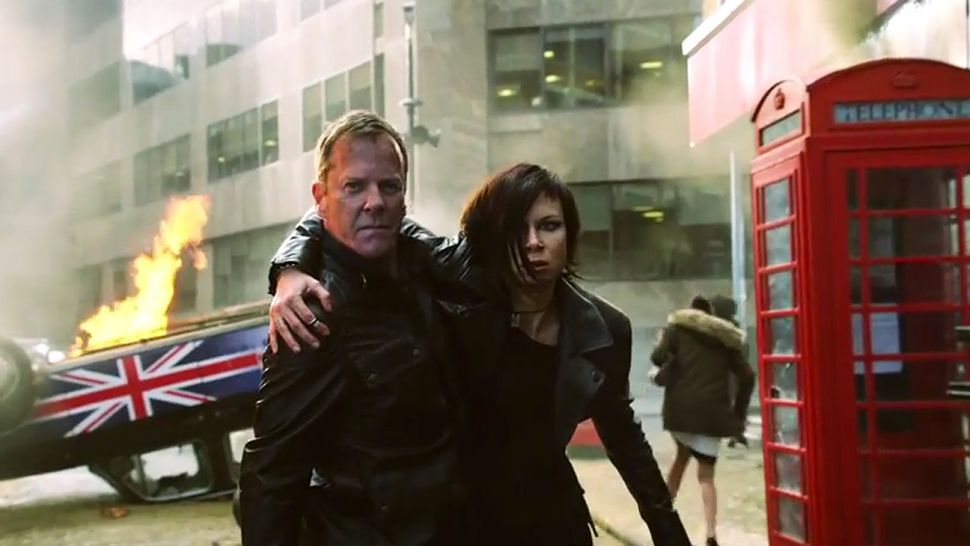