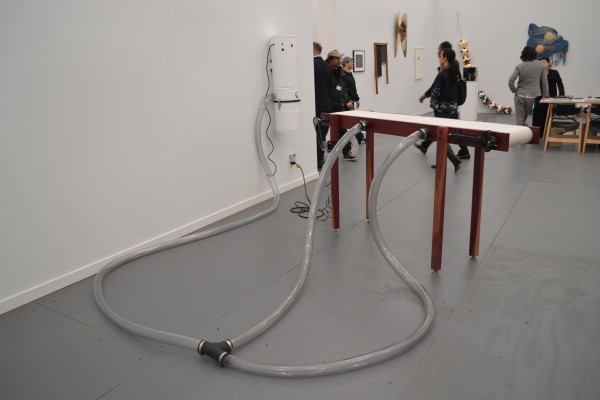 There’s a very elegant conveyor belt humming away in Air de Paris’s booth at Frieze New York, perched on a thin wooden table. Two bulky plastic tubes connect it to an unplugged vacuum cleaner of sorts that is hanging on the wall. I’d never seen anything like it. No surprise, the relentless obscurantist Aaron Flint Jamison made it. (You may recall his tricky show last year at Artists Space, which involved a LiDAR scanner repeatedly mapping the nonprofit and recording the data on a computer.)

The gallery’s co-owner, Florence Bonnefous, provided some help. “There are some letter-pressed prints, documents, like poems, which are under the belt, which are somehow activated by the blower,” she said.

What happens when it actually gets plugged in and starts roaring? “I’m very frustrated, because I have not seen it myself,” she admitted. “As far as I understand it, the moment they are shaken, they will be ripped into pieces and they will start going into the pipes.” She likened it to a bachelor machine. No, it will not be plugged in during the fair: it’s apparently “horribly noisy.” 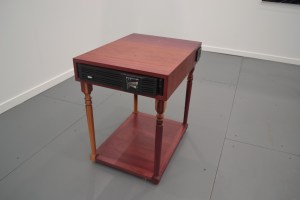 Mr. Jamison has also created a similarly attractive wooden table with a battery and plugs for charging various devices. (Sort of a great thing for an art fair.) Once the table is fully charged, “you can use it for a good while—several weeks.”

The work (like so much of Mr. Jamison’s art) is about a kind of decay, she pointed out—objects and technologies fading into into obsolesce. She thought for a moment looking at the table, and then said something I don’t think I have ever heard out of a contemporary art dealer’s mouth: “It already looks a little old-fashioned.”