Bryan Greenberg in A Short History of Decay.

A Short History of Decay, a modest but winsome film about a struggling Brooklyn writer, doesn’t spend much time in New York; nevertheless, the city casts a long shadow over the story.

Nathan Fisher (Bryan Greenberg of HBO’s How to Make It in America) is an agitated 35-year-old who spends more time worrying about Alzheimer’s disease, which afflicts his mother, than he does tending to his unfinished novel and play. He’s intimidated by the scores of successful authors who are his neighbors in an only mildly fictionalized Park Slope. Gary Shteyngart, making a quick cameo, spits on him in disgust outside Kos Kaffe, while inside, luminaries like Kurt Andersen, Philip Gourevitch, Tad Friend and Jennifer Egan, playing themselves, hog the tables.

Michael Maren, A Short History’s writer and director, is a journalist and himself a denizen of the New York publishing world, which perhaps accounts for the intentionally narrow appeal of certain aspects of his debut film: If you can identify Mr. Andersen as more than an extra, you’ll probably enjoy it. That said, A Short History ends up being the sort of sweet and quirky movie that will appeal to everyone, even those who think Spy magazine was a publication put out by the C.I.A.

Nathan has a beautiful girlfriend (Emmanuelle Chriqui), about to publish her first novel, but she’s stuck-up and wrong for him; she leaves Nathan for a literary agent. When his father (Harris Yulin, perfectly coarse) has a stroke and Nathan heads down to Florida, where he stays for the rest of the film, to tend to him, the movie begins to breathe. Nathan’s mother (Linda Lavin, excellent) is a welcome presence, good-natured despite her fading memory. And the warm Southern air does him good.

It takes a while for Nathan to settle in and shed his neuroses. He drinks too much and quibbles with his mother. He walks around in a Paris Review T-shirt and hits on an attractive but annoyingly pseudo-intellectual 25-year-old French girl who says her favorite authors are David Foster Wallace and Michel Houellebecq. The cute manicurist (Kathleen Rose Perkins) who does his mother’s nails, on the other hand, may not be an intellectual, but she’s smart enough to ask Nathan why he’s writing a historical drama about the Italian anarchist Errico Malatesta when he doesn’t appear very enlivened by the topic. He doesn’t have a good answer.

Walking on the beach, Nathan calls his ex in a moment of angered desperation. “No one’s gonna give a shit that you published a book, O.K.?” he yells at her. “Look around the F train during rush hour—I bet you there’s a ton of people crammed in that car and five of them have published books. They’re just as uncomfortable and irritated as everybody else.”

Not everyone is uncomfortable and irritated, of course, though it may seem so in New York, where the rent is crippling, the people are crazy and the city often feels like the only place on Earth that matters. Will Nathan return to New York? It isn’t entirely clear. The longer he hides out in Florida, the more comfortable he seems to be.

A minor quibble: Mr. Greenberg, who projects the air of a high school jock, seems miscast. Then again, that could be the point. Brooklyn’s literary culture is so insular and can feel so insufferably highbrow—evinced on the page in Adelle Waldman’s pretty-good-but-nowhere-near-Jami-Attenberg debut novel, The Love Affairs of Nathaniel P. (2013), and on screen in indie flicks like Noah Baumbach’s The Squid and the Whale (2005)—that Nathan’s brain might just be fogged up.

A serene feeling came over me as I watched this movie—the kind you get when you leave the city and realize how tense it has made you. New Yorkers, Mr. Maren’s film argues, should be happier than they are. 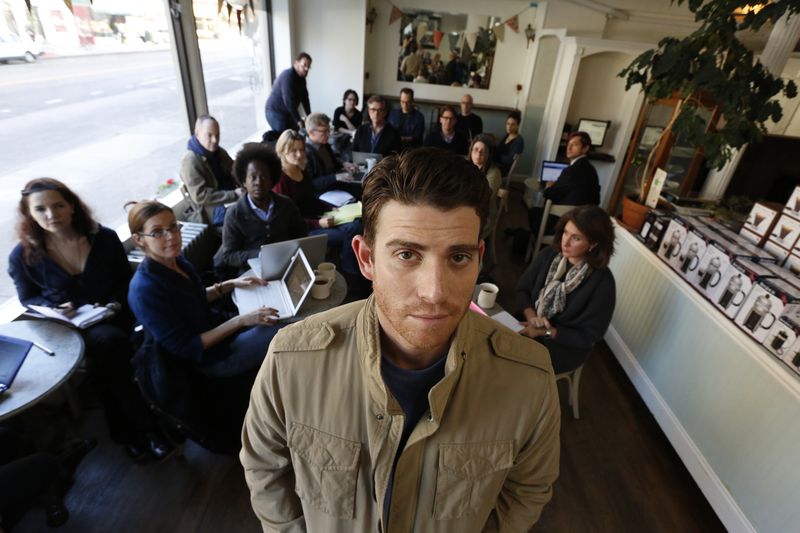