After a full day of activities that included visits to schools and senior centers, State Senator and congressional hopeful Adriano Espaillat handed out fliers on the corner of 116th Street and Lexington Avenue while people went in and out of the subway.

Mr. Espaillat greeted commuters in both Spanish and English, remarking on the frenetic campaign schedule. “I’ve lost 15 pounds, my pants are falling down,” he told the Observer.

Mr. Espaillat devoted his Friday to voters in the East Harlem neighborhood for a good reason. As the Observer reported back in March, these voters proved elusive in 2012.

Veteran Congressman Charlie Rangel crushed Mr. Espaillat in East Harlem by more than 2,500 votes, which proved especially important since Mr. Rangel won by a slim 1,000-vote margin. The Espaillat campaign is hoping to improve on that dismal East Harlem showing.

“I think they are receiving me very well, they know my name,” Mr. Espaillat said, even though he does not represent this neighborhood in the senate. “They seem to know who I am and they seem to be grabbing the idea of change.”

He also emphasized the importance of the vote outcome in what is expected to be a tight race against Mr. Rangel.

“I am sure it will be an important factor. I have both local elected officials, Robert Rodriguez, the assembly member, and the speaker of the City Council are with me. We have both political organizations working for us and I am personally also making a special emphasis in this neighborhood,” he said, referring to East Harlem’s elected officials.

He said that East Harlem residents told him that they felt abandoned by Mr. Rangel.

“Many of the people here feel like they’ve been left out, that the Rangel years have not included them. He served his time already, whether good or bad, it’s time to move forward,” he said. “People want to see a new face, new ideas, a new vision for this neighborhood.”

Council Speaker Melissa Mark-Viverito, who backed Mr. Rangel two years ago, toured the neighborhood with Mr. Espaillat yesterday and was also present at the subway stop.

“I’m excited, ” Ms. Mark-Viverito said. “We know that the deciding vote last time around was El Barrio/ East Harlem and so we are really coming all out for Adriano. We are going to get out the vote for him.”

“This community is going to be the deciding vote, I am really invested,” Ms. Mark-Viverito continued. For her, a victory by Mr. Espaillat would mean, “new energy, a new vision, unity and it means having a partner in government”.

The heated race, which a recent poll showed Mr. Rangel leads by 9 points, will feature its first televised debate on June 9. In addition to the two heavyweights, Pastor Mike Walrond and Bronx activist Yolanda Garcia are competing in the Democratic primary. 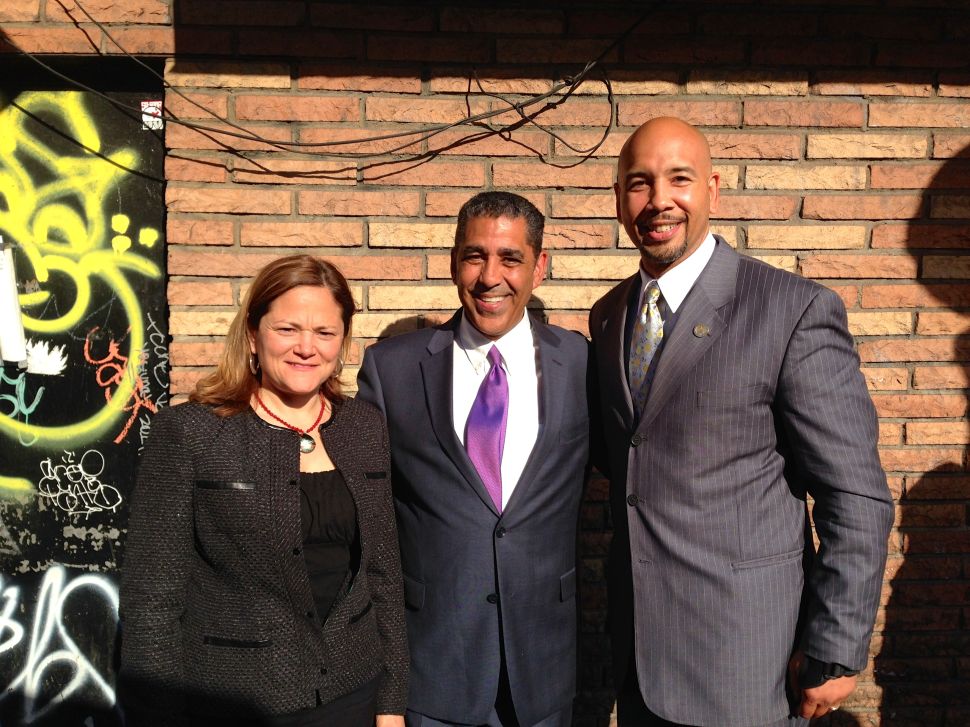